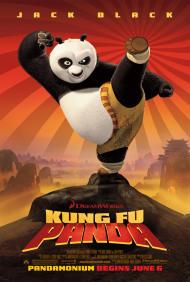 Jack Black has done supporting voice work in a couple of animated films, Shark Tale and Ice Age. With Kung Fu Panda, Black has his first starring voice role. Other than Dustin Hoffman, as his teacher Shifu, the rest of the cast’s script were probably no more than one page long. Your lucky to hear Jackie Chan more than twice. This leaves Black to carry the film. He does a decent job, but why pay such big names for roles they may have phoned in.

Po is a Panda working in his, duck, father’s noodle restaurant. True to almost every animated film, minus The Incredibles, Po seems to be the son of a single parent. No mother is ever mentioned. Po dreams of being a kung fu master while his father expects him to take over the family business. His father explains that they are "noodle folk," and "broth runs deep in our veins." The local Kung Fu school contains the legendary Kung Fu master’s, the Furious Five. They are an array of martial artists which Po idolizes. Upon hearing that an enemy, Tai Lung, is heading their way to seek revenge, a tournament is held to discover the one kung fu master that can defeat him. The rest of the film can be seen from a mile away.

Black and Hoffman provide all of the films laughs. Po is an overweight, lazy compulsive eater while Shifu is a strict instructor who cannot believe Po is a hero. Po at one point tells Shifu to be more direct in his explanations instead of trying to be all, "...kung fuey and mystical." The best moments are when they share the screen together. My favorite part is when Shifu uses food to train Po. One of their last conversations in the film brought the loudest laugh from the audience.

Kung Fu Panda has some nice animation. The best animated sequence is when Tai Lung escapes from an underground prison. The plot is predictable, but the pacing is quick enough that it keeps you watching, even when you know exactly what is about to happen.

Po is a likable loser who you want to see win.

I have to agree about the voices being done by such famous actors. I didn't realize who a few of them were until the end credits and I had the same reaction. Why have Jackie Chan give only 2 or 3 lines? Why didn't he play the voice of Shifu or Tai Lung?

This is a cartoon whose humor tends more on the sweet side than the belly laugh. Po is a likable loser who you want to see win and Jack Black has a humorous charm that shines through the animation. Although there are some funny moments and some good lines, such as when Shifu tells Po, "Panda, we do not wash our pits in the Pool of Sacred Tears."

Eric, you are obsessed with the single-parent households in animated movies. Here at least it is played for laughs. Is Po adopted? If not, how is his father a duck? There's one moment where you think you'll find out the answer, but it's only a tease.

This is a nice little cartoon. Not a classic, but certainly enjoyable. 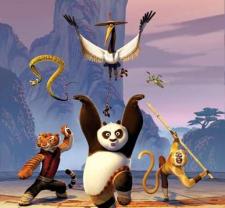 What a creative menagerie!

Some wise person once said (and I am paraphrasing), that there are only a handful of stories. In other words the story is not as important as the way in which it is told. Kung Fu Panda has a plot as old as the hills, but this clever, touching, humorous, action-packed movie seems fresh as the morning paper. Jack Black and Dustin Hoffman make a magnificent comedy team. They lead this creative menagerie of characters that are all voiced well.

Eric and Scott, haven’t either one of you ever heard of a cameo? Part of the fun is trying to recognize the voices. You both underrate this charming and totally entertaining cartoon. Eric, get over the single parent issue. Scott, were you in a bad mood?

This is a great movie. The 10 year old boy in me LOVED Kung Fu Panda and readily identified with Po, the most likable, unlikeliest of hero’s. 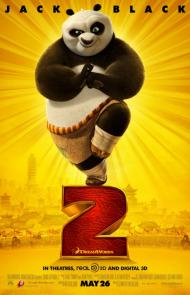