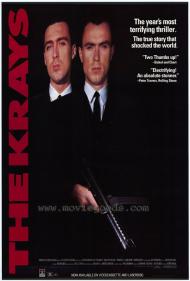 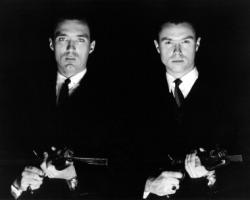 Ronald and Reginald Kray were notorious twins who ruled London's East End in the 1960s.  They ran night clubs and murdered whomever pissed them off.   Like some old James Cagney film,  the Krays are depicted as having some Oedipal Complex.  Their mother is everything to them and they love and obey her above all others.

The early scenes feature the boys being raised by their domineering mother and the other women of the neighborhood, who constantly berate and belittle men, including their own father. This is most obvious during the war years when they help to hide their draft-dodging father.  The twins are shown having some sort of psychic connection, being able to read each other's thoughts and finish each other's sentences.  At one point as young men they get into a ring and box without ever saying a word to each other.

Their mother stops the fight and tells her two prince's of violence that they are to never again fight each other.   Violet is not portrayed as a criminal, but the enabler for her boy's psychotic outbursts.  She never questioned how the boys ever came into their money or are able to buy and run several night clubs, but then she is shown using nice china and wearing fur.

As in real life, the twins were drafted but went AWOL several times.  My favorite line from the film comes from a brief scene of the boys in uniform.  A drill sergeant, acting like Michael Palin in the sketch, "Marching up and Down the Square" from Monty Python's The Meaning of Life (1983), is barking at the boys, who decide they have had enough.  "And where do you little darlings think you're off to?" he yells at them as they start to walk away.  "Home, for a cup of tea with our mum."  The angry Sergeant continues, "Get your nasty little arses back in here!"  Reg then says, "Look, you've got nothing to say and you're saying it too loudly. So..."  "Bollocks!"  Ron finishes.

Ron and Reg become violent psychopaths.  In one scene, Reg uses a large knife to widen a man's mouth by pressing it through his cheeks.  In another scene they hold a man onto a pool table while they put a large knife through his hand and tell the man to say "Thank you." for letting him live.  In another Monty Python connection, I recall a skit from their show where Graham Chapman, in reference to the Krays, says they nailed his head to the floor.

The Kray's reputation was broad and they enjoyed their fame.  They were known to have met celebrities like Diana Dors and even Frank Sinatra.  When an American gangster pays them a visit he asks if they know The Beatles.  Reggie responds, "No" while Ron ads, "I believe they know us."

Reggie gets married to a mousy little girl who soon finds herself getting lost in a world of criminals and domineering old women.  Reg tells her what to wear and where to go.  She ends up committing suicide, which had long been the story.  However, it was later claimed that Ron admitted to killing her out of jealousy.

Ron is shown to be a homosexual.  His right hand man is likewise his lover.  He is shown giving him as much grief as everyone else.  In his autobiography, Ronald Kray states that he was a bisexual and not a homosexual.  He married two different women in his life.  It was claimed later that Ron also raped men.

That is the legend of the Krays, they are both dead but their lives continue to grow as new stories keep surfacing, whether true or not.  They were a part of the London pop culture of the swinging 60s.  Of all the things this film could have addressed it spends far too long on Violet Kray and her sister Rose.  One scene has Rose give a speech to Violet on how hard women had it during the war.  Neither twin is present, making the scene better fitted for another movie about women who survived the blitz.

We see the Krays all dressed up and a local grocer acting scared to death of them, but I would have liked a bit more about how they were perceived by the general populace that made them the talk of the town.   Instead, the film is told by way of the mother, as if giving a warning that a domineering mother will lead a son to crime.  It is an old cliche.  Just look at the homage Cody Jarrett pays to his Ma at the end of White Heat (1949).