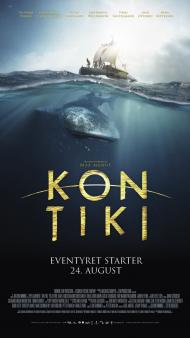 Kon-Tiki is the first Norwegian film to have been nominated for both an Oscar and a Golden Globe. It was the highest grossing film of 2012 in its native country and also its most expensive film ever produced. It's an entertaining film, but one that never really engaged me on an emotional level.

The story is based on the real life Kon-Tiki expedition of 1947. In that year, Norwegian ethnographer and adventurer, Thor Heyerdahl set out to prove his theory that 1500 years ago the Polynesian Islands were settled by Incas who traveled over 4,000 miles from Peru to Polynesia by raft. To prove it was possible, he, along with five fellow adventurers, built a raft using only materials available to the Incas of the time, and set sail to retrace those ancient mariners' sea voyage.

While the first half hour introduces us to Thor and shows his efforts to get funding for his journey, the majority of the film takes place aboard the raft with just the six main characters. They face the elements, sharks, tedium, a disintegrating raft, and each other on their 100 day journey across the Pacific. It's beautifully filmed and often quite tense, but as I said, not entirely engaging.

There are two reasons I never felt overly invested in the outcome of the film.

First, these men put their lives on the line for a rather weak purpose. Thor is obsessed with proving his theory, but was it really so important? Apparently it was to him, but I never understood why. Because of this, every time one of the crew members was in danger I kept wondering why they were taking this chance. Perhaps it was for the fame and the glory. That's a reason I would have believed more than simply wanting to prove an obscure theory.

And secondly, we never learn enough about each of these men to care about them personally. I wanted all of them to survive of course, but not for any particular personal reason. We're given hints about some of them. One was a war hero, for instance, but what drove each of them to take this journey isn't fully explored.

As an interesting side-note, Thor's theory was never accepted by the wider scientific community. Modern science has since proven that the Polynesians are genetically related to Asians and not South Americans. That fact doesn't lessen the effort or difficulties that Thor and his crew faced, but it does add to the feeling of futility regarding their motivation.

Thor and one of the crew took turns filming the expedition. They were able to assemble their footage into the Oscar winning documentary of 1951. So far, that is the only Norwegian film in history to have won an Oscar. Given that this movie is up against Amour, it's doubtful that it will become the second. 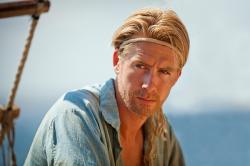 Scott, of course fame and glory were a part of Thor's goal. He had previously had a book published and this trip later became an even bigger selling book and an Academy Award winning film. The real reason though, I believe Thor and these men made the trek is very base. Man has an innate sense of curiosity. We want to know how things work and what lies over the next hill. In the words of feminist Camille Paglia, "If civilization had been left in female hands we would still be living in grass huts." Men simply have a need to explore. I do not believe these men had any deeper motive than a curiosity to see if they could do it.

With that said, I too found a lack of interest with this film because it never allowed us to truly get to know any of these men well enough. Most of the time I could not distinguish one from the other. Perhaps this was do to translation, but I will blame the writing. The personalities are far too subtle. We have the documentary to watch if we want to, why not play these guys bigger and more entertaining.

Thor is the center piece of the film yet he is not so likable that I rooted for him any more than anyone else on that raft. He is shown early on with his wife and later we see her back home with their sons while he spends a year away from them. Not surprising, they divorced right after these events. Thor would marry twice more before his death in 2002.

The best this film has to offer are the special effects at sea. These men are shown dealing with a whale and sharks in the movies most suspenseful sequences. It all looks perfectly real and very threatening. A brief search online found a photo of the real men with a shark on board the raft. I wonder if how it was shown being caught in this film is how they actually caught it?

This film plays out like the flip side of Life of Pi, where a boy traveled the Atlantic ocean from west to east, ending in South America. Kon Tiki started in South America and crossed the Atlantic to the west. Pi is on a boat using his imagination to survive a situation he never wanted to be in, while these men are in a similar situation of their own making with very little imagination to speak of.

Kon Tiki tells a true story but it is not told in a very entertaining fashion.

A close call in Kon-Tiki.

I enjoyed this movie more than my brothers. I was never perplexed about their motives. Man has long yearned for adventure at sea and Thor and company have the added impetus of proving a scientific theory. History is filled with men who risked their lives to prove something that seemed nearly impossible was actually achievable. I disagree that it's a weak purpose and obviously these men didn't think so either. And unlike ancient Peruvians they have the benefits of bringing a radio to communicate with the outside world as well as an inflatable life raft in case the wood raft comes apart or begins to sink.

Kon-Tiki is beautifully shot. They recreated the actual balsa raft used in the real 1947 expedition which adds a level of authenticity to the movie. For the most part it was shot on the open sea. Like Life of Pi it uses CGI to great effect, only much more sparingly. Unlike most modern movies it keeps the visual effects realistic, especially the marine life. The scene with the whale-shark is reminiscent of Jaws, when the huge fish is shown swimming under the raft (see photo). I agree with Eric that the scene where one of the men goes overboard in shark infested waters is nail-biting cinema at its finest.

The acting is solid. Pål Sverre Valheim Hagen and Anders Baasmo Christiansen are the stand outs. Pål plays Thor Heyerdahl, the leader of the outfit, who demonstrates an almost religious-like fervor for the mission. He constantly evokes the name of the Polynesian God Tiki. Anders plays Herman Watzinger. He is prone to panic attacks and is referred to as “a refrigerator salesman” several times as a way of excusing his sometimes irrational behavior.

Watching this gloriously shot recreation made me want to see the original documentary. It's a true story that is difficult to imagine. If they hadn't captured the experience on film it would probably not have been believed. At any rate it is a remarkable historical achievement that deserved this in-depth look. By the time they wade ashore on that impossibly gorgeous tropical beach you feel as if you have made this perilous journey with these six men. I felt Thor's joy when he collapses in the sand with relief and pride in their amazing accomplishment.