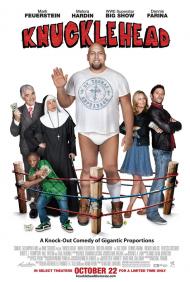 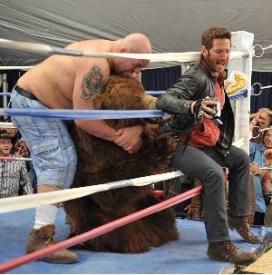 Paul (The Big Show) Wight, a man in a bear costume, and Mark Feuerstein.

There are many different types of movie humor, for many different types of audiences.  The jokes found in Knucklehead are definitely aimed at young guys, or those that appreciate bathroom humor.  I could be a snob and call it low brow.  There is no thinking involved with these jokes.  I could be a fan and call it classic.  Physical humor has been around since silent films and utilized ever since by the likes of The Three Stooges, Jerry Lewis and Jim Carey.   Sure, this film will not win any awards, but it will easily satisfy fans of the genre.

WWE star, The Big Show plays a 35 year old man, Walter, who still lives in the orphanage he grew up in.  At seven feet tall he is a walking disaster.  Fate would have it that a desperate mixed martial arts manager, Eddie, finds himself praying for a miracle in the church attached to the orphanage. They meet and strike up a partnership.  Eddie needs to pay off some debts to a mobster, while Walter needs to fix the orphanage kitchen he burned up.

Along with a female chaperone, Mary, the three hit the road for some misadventures on their way to the big fight and purse.  Eddie sets up little fights along the way and posts them on YouTube to work up some interest in Walter.  These fights involve fighting a bear, and some kid's pissed off dad.  He even fights in a synagogue full of Jewish martial arts fighting fans.

The Big Show is a good comical actor.  His physical presence provides some jokes in and of itself.  He also utilizes one of the sappiest and funniest smiles I have seen in a film.  He is basically a giant middle aged kid.   The film never says why he ended up at the orphanage.

It also only hints at Eddie's background.  He use to be a fighter and is now a loser manager in debt to the mob.  Mary has one funny point of exposition where it is revealed she used to be a stripper.   Both of them should have had at least one more scene where their past came back to haunt or help them.

Knucklehead is full of heart and sap, and has the feel of been there, done that.  The big guy fighting to raise money to help the orphaned boys and Nuns is reminiscent of John Garfield in They Made Me a Criminal (1941).   The idea of taking a rube on a road trip to play a sport was done in the more adult Kingpin (1996).  Depending on how you want to look at it, Knucklehead is either old fashioned, unoriginal, or both.  Either way, it is harmless family fun.