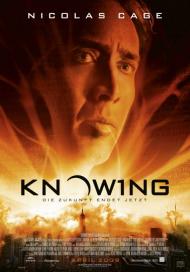 A great scene in an okay film.

I knew going into this movie that the ending was not going to live up to the set up. How do you introduce a movie that states quite clearly that the future has been predicted, and it does not look good? I knew the ending would be some ridiculous climax.

Cage plays a single father who obtains a list of numbers from a fifty year old time capsule from his son's school. He deciphers the numbers to coordinate with natural, and manmade disasters. All of the numbers have already happened except for three. He goes about trying to stop them from occurring.

One such attempt is the film's best sequence. A plane crashes near him. He raises through the wreckage as passengers from the plane are all about him, screaming and burning. It is one of the most harrowing scenes I have witnessed in a movie in a long time.

Unfortunately the rest of the movie does not contain the same emotional weight. Besides the predictions, some mystery men keep hanging out in the background staring at his son. They talk to him with what his son says are whispers. He and his son soon hook up with the daughter of the woman who made the original predictions. She is likewise a single mother, whose daughter is the same age as his son.

I would really like to talk about the ending as it is the part you will remember the most, and not because it is good. In fact, think of the worst possible way this movie good end and you may be close. You might say that at least the film makers did not wimp out, but it was their fault for trapping themselves in the corner to begin with. 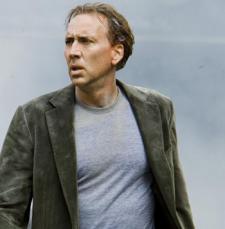 You pretty much nailed this one Eric. It deals an intriguing hand, but once all the cards are turned over, there are no winners, least of all the audience.

I for one really thought that the ending was going to be a spiritual one. It certainly hints in that direction, but the ending then becomes pure science-fiction, which is a shame because once you replace religion with science, the plot has to make sense, and it just doesn't. I'm referring to the whispering men and the reason behind the numbers. I guess I won't give too much away, but I have to say, they were trying to communicate something and that's the best way they could think of to get their message across?

Nicolas Cage once again proves here that he is the king of the B-movie. While I'm sure somewhere inside him still beats the heart of an actor, he seems content to keep muddling through with these obscure parts where no real acting is required. For most of this movie he's just depressed and serious, but then in the final 20 minutes or so he goes into action mode, where he moves around a lot, but still looks depressed and serious.

There are a few nice action scenes. The one you mentioned about the airplane, Eric, is probably the best, although the subway scene (while clearly not filmed in a real New York City subway station or with a real subway train) is also well done, if a little bit too CGI heavy.

This must have been one of those movies where the pitch meeting sounded exciting. It's too bad they couldn't come up with an ending as interesting as the premise.