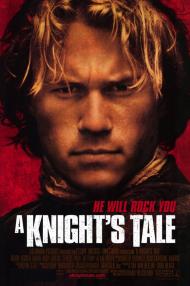 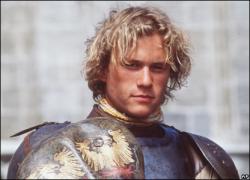 Heath Ledger in A Knight's Tale.

I often worry that after reviewing so many movies, that I will never be able to just lose myself in a movie and enjoy it without judging it as I'm watching it. Surprisingly, A Knight's Tale allowed me to do just that. Despite its silly premise and execution, I found myself totally lost and in utter enjoyment, watching this simple and ludicrous tale of the squire turned knight jouster.

The premise of the movie is simple. Three squires to an elderly knight find their livelihood threatened when the knight dies in the opening scene of the movie. Faced with starvation, one of the squires who has always dreamed of being knight, decides to put on the armor and finish the jousting tournament so that they can win the prize and have enough money to eat. Of course he wins, and he develops a taste for jousting and decides he wants to continue.

On his journey from peasant to Jousting Champion, he picks up a motley crew of supporters, there's the hot headed red-head, the female blacksmith, the older and supposedly wiser squire, and Geoffrey Chaucer who becomes his herald. This supporting cast is one of the brightest spots of this already bright film. They provide most of the comic relief, especially the Chaucer character. He also, naturally, meets a princess who he falls in love with, and meets an evil knight that he vows to beat on the jousting field.

Predictable and incredibly historically inaccurate, this movie seems on the surface doomed to failure, yet somehow, thanks to not taking itself too seriously, it comes off as totally enjoyable.

Part of the fun and what almost pushes it over the edge into campiness, is the way modern music and attitudes are worked into a medieval setting. The opening jousting scene shows the crowd clapping and singing along to the Queen classic, 'We Will Rock You' and also shows the crowd doing the wave. During a formal, courtly dance, the music and the dance suddenly becomes very modern. The female blacksmith marks her armor with her symbol that looks amazingly like the Nike symbol. The costumes all have a modern flair, I especially like Prince Edward's long flowing leather jacket. Yet this just adds to the fun. The movie is saved by the fact that its tongue is very firmly planted in its own cheek.

The only part of the movie that goes too far are the scenes with William's (Heath Ledger) blind father and the flashback scenes. These scenes are cringe inducing in their sentimentality, yet they are the only bad scenes in the whole movie. When these scenes come on the screen, use that time to go get a refill of popcorn or use the bathroom, because you don't want to miss any of the rest.

Filled with simple fun, and some truly hilarious moments, this movie is the most fun I've had at the movies in a really long time. 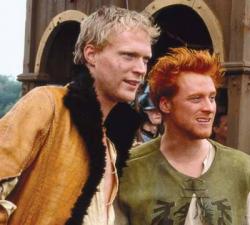 Paul Bettany and Alan Tudyk in A Knight's Tale.

Scott completely stole my line. As I finished watching A Knights Tale, I thought to myself that it was one of the most enjoyable movies I have seen in a long time. It has action, romance and great humor.

Let's start with the action. The Jousting scenes were all remarkably well done. I felt each crunch and splinter of the jousters lances. I actually found myself flinching during these scenes. The jousting seen here is far more tense and exciting than the predictable bloody contests in Gladiator.

The romance in this movie is not a dominant theme but important none the less. The lady, our hero knight fancies, asks him, at one point, to lose a tournament to prove his love. The following scene says volumes about the relationships between men and women.

The humor in this movie kept me rolling through most of it. 'Quit letting him hit you' yells one of the squires to the knight in a sword fight.

When trying to compose a love letter to the lady it is suggested by one of the players to mention her breast. The idea is shot down not due to bad taste but because 'her breast weren't that remarkable anyway.' As Scott has already written, the supporting cast is great.

To disagree with Scott I have to write that I liked the reunion with his father scene. Its poignant, sentimental and advances the plot. As a son and a father I understood.

Definitely a guy movie. But a fun, action packed, laugh out loud guy movie, with a killer soundtrack. 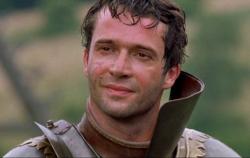 James Purefoy in A Knight's Tale.

While I certainly enjoyed this movie I do not think it worthy of four stars. It was lacking that little extra spark that truly great movies have.

Heath Ledger does a fine job in the lead role and, as mentioned, the supporting cast all shine as his comic relief. Still the part that I really connected with was the flash back story of our hero as a young peasant boy who is given up by his father to be the squire to a knight; his only chance for a decent life. The idea that someone from the poorest segment of society can rise through the ranks is as old as the hills but if done well enough never fails to make an impression on me.

So, unlike Scott, I would have enjoyed this more as a less silly movie. As a spoof it never goes far enough. They could have left some of the humor in but focused more on the dramatic side. I suppose the modern music would have seemed more out of place but actually I think they could have still used it to underscore scenes without having the characters react to it.

Still A Knight's Tale is a good time to be had by all with a few touching moments thrown in for good measure.