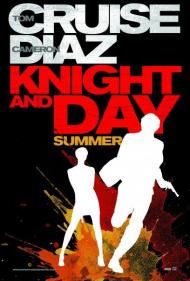 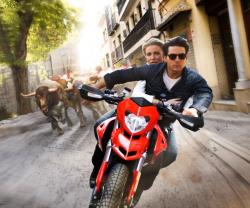 Although it is rare, the presence of some movie stars can sometimes be enough to make a movie watchable, even when it does not deserve to be.  Cameron Diaz and Tom Cruise brighten Knight and Day, and distract you from the ridiculous plot.

Diaz bumps into Cruise at an airport and then later on a plane.  As she is in the bathroom he kills everyone on it.  "The pilots are dead!"  She says after looking into the cockpit.  "Yeah, they've been shot." He says nonchalantly. "By who?" "By me. No, actually, I shot the first pilot then he accidentally shot the second pilot. It's just one of those things."  Thus starts a wild ride in which Cruise kills countless people without ever breaking a sweat.

He informs Diaz that he is the good guy even though everyone else will tell her otherwise.  He has something that everyone else wants.  Did he steal it for his own gain or is he protecting it from nefarious people on either side of the law?

The answer is almost moot.  Cruise plays the action hero like it is a walk in the park.  The action scenes are plentiful and exciting, though they lack any emotional strain.  My favorite is the motorcycle chase in Seville Spain. These folks travel all over the world.  From the Azores to the Alps, this couple seems to get around the world faster than Superman, even when one is unconscious.

No matter where they stage an action scene though, none are in the least bit tense.  It is made very clear early on when hundreds of bullets miss them that these two are in no real danger.  Apparently, Cruise is the only person in the movie who knows how to aim a weapon. Okay, Cruise gets grazed at one point and there is a semi-dramatic shooting at the end, but none of it means much.  In the worst moment, Diaz says, "You don't look happy to see me."  Cruise responds that he is and kisses her.  Oh, I forgot to mention that they are being shot at by several men and Cruise walks in the line of fire to kiss her.

Although the action did not generate much emotional response from me, it did give me time to reflect on how Cruise and Diaz have some genuine chemistry.  They each have a scene where they tell the other how they changed their clothes while they were unconscious.  It demonstrates that they should have taken this movie more in the romantic/comedy/action direction.  There is no real danger to speak of so they might as well have amped up the humor. 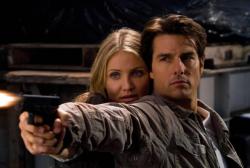 Cameron Diaz and Tom Cruise in Knight and Day.

Eric, your review confuses me.  You mention the scene where Cruise walks through a hail of bullets to kiss Diaz and you react as if you were meant to take it seriously.  Clearly the scene is being played with its tongue firmly in its cheek, as is the rest of the movie.  You say that the plot should have gone more in the romantic/comedy/action direction, but that's exactly the genre under which I would categorize it.  You could almost consider this movie to be a spoof of Cruise's Mission Impossible character.

I'm not normally a big fan of Cameron Diaz. She's alright, but she's just never been in any particular movie that I've been a fan of.  Here though she does a decent job, making good use of her "light up a room" smile.  You're definitely right Eric that she and Cruise share a great chemistry, both a romantic and definitely a comic one.  They banter, usually while under heavy gunfire, quite convincingly.  (Cruise: "They'll tell you I'm mentally unstable and violent and dangerous and it will all sound very convincing."  Diaz: "I'm already convinced.")

Granted, because this is a comedy, not all of the action is needed.  Listening to Diaz and Cruise comically bumble there way across continents is more entertaining than watching them battle bad guys and drive with the bulls.  You do know that nothing bad is going to happen to anyone and therefore they could have saved some of the budget and not bothered with quite so many gunfights.  In fact, one of the funniest sequences in the movie is when Diaz is drugged unconscious and then swoons in and out of consciousness with each time she approaches consciousness you see that they are in ever more dangerous and bizarre situations.  You see only glimpses of the action, but the humor is still there.

Yes, the plot to this one is very over the top, but obviously that's intentional, so it seems a bit odd to criticize the filmmakers for it.  If you go in expecting a comedy, this one will entertain, in large part because of its winning cast. 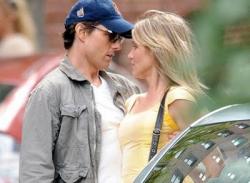 Cruise and Diaz make like Cary Grant and Audrey Hepburn in Charade and as such carry the movie and make it enjoyable. I agree Scott that the over-the-top action scenes work because this is a comedy. As a drama it would just be stupid. But since this movie is clearly set in the world of “Hollywood Land” it comes together and manages to entertain in a breezy fast-paced summer movie way. That isn’t to say that the script is great, because it isn’t. They could have taken the humor much farther and possibly ended up with a classic like Charade. Instead this is just another decent but ultimately forgettable action/comedy.