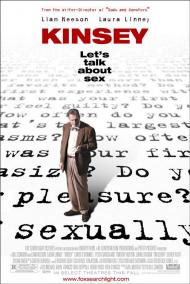 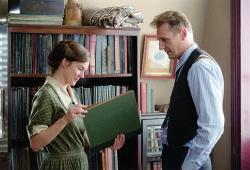 Let's face it; sex is interesting. It's not only what keeps our species alive through continuing generations, it's also the impetus behind so many aspects of our culture. And yet, until the release of Kinsey's first book dealing with human sexuality was published in 1948, no truly scientific study had been done on the subject. It was fascination with sex that turned that book into a national bestseller, and it is that same fascination that makes this movie work.

Dr. Kinsey's (Liam Neeson) preferred method of data gathering was by interviewing subjects about their sexual history. A history that was then recorded in code for which there was no written key to provide anonymity. It is through this method that movie gains its structure. Kinsey himself is interviewed by several of his associates throughout the film, and he reveals his life story to them in flashbacks.

Raised by a strict, religious father, Kinsey remained a virgin until his marriage. It was as a consequence of his own uncertainties in the marriage bed and the various questions his students would ask in private at the university where he was a professor who specialized in the study of the gall wasp, that he first conceived of the idea of teaching a human sexuality class. At first, there was some resistance to the idea of the class, but the overwhelming number of students who signed up to take the course, soon overrode the university's objections. It was as an assignment for his class that he took the first sexual histories. Discovering the fascinating data, these histories returned he sought out and was given a grant to do a national study.

The resulting publications were greeted with acclaim and then controversy. While many people considered Kinsey immoral, as shown in this film he was more amoral. Sex, it seems, is just another subject to study. He has an affair with one of his male colleagues, but rather than passion, it seems to be more for the experience. Later he encourages the same man to sleep with his wife. Actions that would certainly qualify to many as immoral, but to the coldly scientific Kinsey seem to be merely experiments. His most controversial action is less easy to excuse. Seeking to interview as many different types of people at one point he is given the offer to interview a pedophile who has kept meticulous records of all of his conquests. In his eagerness for the data, Kinsey happily takes the interview. It is this same sense of experimentation that drives him to pierce his foreskin later in his life, to which he reports quite calmly, "There was quite a bit of pain, but very little pleasure." 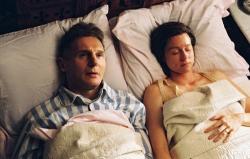 Actually Scott, Kinsey is not at all about sex. It is about two opposing views that go to their own extreme. Early in the movie we see Kinsey's father as a pious preacher who blames everything from automobiles to telephones for promiscuity. Anything other than sex between a husband and wife is wrong in his book. By the end of the movie, Kinsey and his study team have gone in the complete opposite direction. Kinsey preaches sex to everyone, all the time. He failed to understand that some people do not wish to constantly talk or hear about sex. He assumed, just like his father, that he knew what was best for everyone. The story arc is that Kinsey becomes his father. At one point in the movie, Kinsey even acts disappointed in his son just as his father was with him.

Dr. Kinsey's studies and subsequent books came to one very big, important conclusion. Sex is simply a part of nature. George Michael's song I Want Your Sex should have been the theme song to Kinsey. The line, "Sex is natural. Sex is Fun. Sex is best when its one on one." would have fit perfectly. 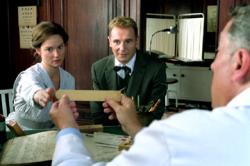 What neither of my brothers mentioned was just how moving this movie is. I was quite touched by the ending. After all his years of being a calculating scientist trying to separate human emotion from the sex act, we finally see the love between Kinsey and his wife. As he puts it, “Love has no place in science because it cannot be measured."

The scene where his father reveals his traumatic childhood experience is tragically touching. But I disagree with Eric's assessment that Kinsey becomes his father. Both men are human and therefore flawed but Kinsey is a much healthier individual, capable of accepting vast differences in others in a way his father is never able to do. His father believes his moral viewpoint is the only God sanctioned one, whereas Kinsey never tries to tell others that they must behave in a certain way. He never tries to push his views on others, sex is simply a science and therefore viewed without moral judgment, but others are free to indulge or not indulge as they so choose.

As a gay man I was extremely moved by the scene where the older lesbian woman (Lynn Redgrave in a powerful cameo) thanks Kinsey for helping her find happiness by reading his book and realizing that she is not alone in her feelings and attractions for the same sex. Kinsey certainly helped gay people to be accepted by our society at a time when physical love between members of the same sex was outlawed in many places.

The acting, by a very impressive cast, is all around first rate. Liam Neeson and Laura Linney both give Oscar caliber performances. Scott is correct, that Sex is the star of the movie, but it is a double-edged sword. People watch for that reason but then dismiss the movie as slightly prurient at the same time. In my opinion, having belatedly seen this movie, it easily ranks as one of the finest of 2004.