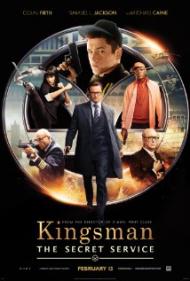 Kingsman: The Secret Service is a fun, fast-paced homage to James Bond by way of Kick-Ass. Matthew Vaughn, who also directed Kick-Ass, brings a similar sensibility of over-the-top cartoon violence and foul language to this movie. It was loosely based on a comic book but was completely rewritten for the big screen. Vaughn has said in interviews that he wanted to do for the spy genre what Steven Spielberg did for the adventure-serial genre with Raiders of the Lost Ark back in 1981. That is, update it in a fresh, modern way for a new generation. For the most part he succeeds.

Kingsman is a covert (is there any other kind?) international spy organization headquartered in London. It consists almost entirely of upper class “gentlemen” with names borrowed from Arthurian legend. We first meet Colin Firth as Harry Hart (or Galahad) on a mission in the Middle-East in 1997 that goes horribly wrong. One of his fellow Kingsman is killed and Harry blames himself. He goes to see the dead guy's family and gives the guy's young son a medal with a phone number on it.

Flash forward 17 years. The boy is now a young man named Eggsy. In a crisis Eggsy calls the number on the medal and -like Harry Potter discovering Hog Warts- soon finds himself in the middle of spy training – with a heavy emphasis on manners and style. Harry takes the young, uncouth, Eggsy under his wing, determined to not only turn him into a super spy but also a make a gentleman out of him. The witty dialogue is filled with pop culture references and -like Guardians of the Galaxy- it uses several catchy old pop songs to underscore certain scenes. The most notable being KC and the Sunshine Band's “Give It Up”, which plays during the climactic action sequence.

The script occasionally pokes fun of spy-genre tropes but it also utilizes many of them. Samuel Jackson's Richmond Valentine is a classic Bond villain. He's a shady billionaire with a lisp and a plan to eliminate most of the world's population in order to stop climate change. His henchman is a deadly chick with prosthetic legs and feet with razor sharp blades attached to them. The tribute to Bond even includes the traditional ending with the hero about to bed an attractive female. Only it contains a level of raunchiness that would make 007 blush.

The cast includes the legendary Michael Caine (his Kingsman nickname is Arthur of course). Now 81 he shows no signs of slowing down. And a nearly unrecognizable Mark Hamill has a small part as a professor. Colin Firth is splendid as the impeccably tailored action hero Harry Hart, and this could be a star making role for Taron Egerton. He has looks, charisma and charm to spare and his Eggsy is a welcome new addition to the spy pantheon. 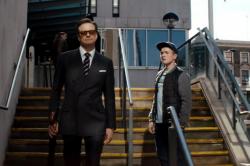 Colin Firth and Taron Egerton in Kingsman: The Secret Service.

There's a long tradition of spoofing the spy genre going back to the 1960s. The Matt Helm series, starring Dean Martin, and the Derek Flint movies, starring James Coburn, were a couple of the more famous early examples. James Bond, who gave birth to the spy craze, started seriously, but became a parody of himself by the 1970s. Mike Myers spoofed these spoofs starting in 1997 with his Austin Powers' series. It was the success of the Jason Bourne films that brought the seriousness back to the genre. Even the James Bond series rebooted itself with a harder edge. Many lamented the loss of the tongue in cheek nature of these films, and obviously writer/director Mathew Vaughn and his co-writer Jane Goldman, were some of those who did.

There is an element of Harry Potter to the story, as Patrick wrote, but the story of a young man learning there's more to his past than he ever knew, is far older than Harry Potter. It also has an element of My Fair Lady about it, and even acknowledges the similarity in a funny exchange between Eggsy and Harry. Harry's upper crust Englishness contrasts nicely with Eggsy's chav lifestyle.

Like the original Bond novels, Englishness plays an important role in the story. The Kingsmen might work internationally, but they are quintessentially English gentlemen and as many English gentlemen before them, they see it as their responsibility to set the world right. The plot shows other countries, including America, letting the side down, but the very English Kingsmen are there to save the day.

I agree with Patrick that we will probably be seeing more of Taron Egerton. He does a fine job as Eggsy. He handles the action and the lighter moments equally well. He and Colin Firth share a nice father/son chemistry. Firth is terrific as Harry. He makes the perfect English gentlemen spy. If the Bond series had continued in the lighthearted Roger Moore vein, Firth would have made the perfect successor to him. He handles the action brilliantly, particularly in the film's most impressive sequence inside a church when he becomes a one-man killing machine.

As someone who prefers his spy movies played seriously, I had reservations about this one. The fact that the studio pushed back the release date several times, only to drop it in the middle of February, did nothing to improve my expectations. My preconceptions may have worked to the movie's advantage since I wasn't expecting much from it. I was so surprised that now I hope it spawns a sequel. 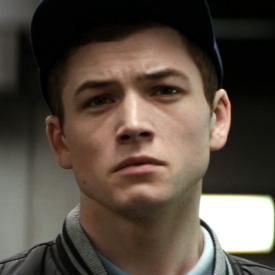 I am hoping for a sequel as well and this highly entertaining action spy film could easily become a movie series. Unlike the James Bond films, replacing the lead actor is actually a part of the plot. When a Kingsman grows too old or dies, he can be replaced by a younger one. Like Doctor Who, the movie series would never have to explain a reboot.

In agreement with Scott, I felt the anal sex scene at the end of Kingsman: The Secret Service came out of nowhere, for a couple of reasons. In reference to a James Bond movie, twice someone says “This is not that kind of film.” Yet, as Patrick wrote, we still have the traditional ending with the secret agent bedding an attractive female. This sophisticated princess encourages Eggsy with, “If you save the world, we can do it in the asshole.” When the time came to fulfill her promise, she should have stayed true to the formula and told Eggsy, “This is not that kind of film.” instead of presenting her bare rear end for penetration.

Another thing that made that scene seem out of place, is that it is the film’s first and only reference to sex. When in training, two young women share a bedroom and open bathroom with Eggsy and five other young men yet no one makes a sexual move or even a dirty joke. Had there been some sexual innuendoes or at least some leering, that final scene would not have been quite so jarring.

Like Patrick I found Colin Firth to be perfect as the impeccably tailored super spy. I also agree with Scott about the camaraderie and contrast between Harry's upper class gentleman and Eggsy's chav lifestyle. For the record, the only other time I have ever heard the expression “chav” is from a Doctor Who episode when Rose once saw herself in a mirror and complained that she looked like a chav.

I am also in agreement that this could be a star making role for Taron Egerton. He is convincing in his chav clothing as well as a suit, which he is told by Harry, “The suit is the modern gentleman's armor.” Egerton is currently in the running to play Cyclops/Scott Summers in the next X-Men film. Either way, we have not seen the last of Egerton and hopefully not the last of Eggsy.