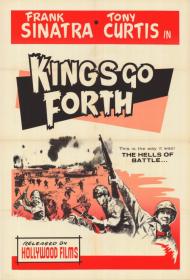 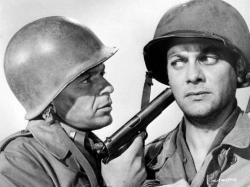 Frank Sinatra and Tony Curtis in Kings Go Forth.

Too often, movies tend to follow formulaic plots. You can see where everything is going long before it gets there. Those films that take their own path and have unique endings are rare, but are they necessarily any better? Kings Go Forth is such a movie.

Sinatra as U.S. Army officer, Sam, stationed in France during the last year of World War II. While on a weekend pass to the Riviera, he meets and falls in love with Monique. They begin dating, but she makes it clear that she only sees him as a friend. A fellow soldier, Britt, comes along and steals Monique's heart. Earlier in the movie, Monique, an American raised in France, revealed to Sam that her father was a Negro.

Much to Sam's dismay, Britt and Monique get engaged. Not only is Sam jealous, but he knows that Britt is a love-em-and-leave-em type of guy. Monique may not love Sam, but Sam still does not wish to see her get hurt.

In between dates with Monique, Sam and Britt fight the Nazis for a French valley. The climax of the movie has them sneaking into an occupied town to better direct the artillery. There, the men have a showdown with the Nazi's and each other.

Sinatra does a great job as the third wheel of a love triangle. Wood, who was far too young for both Sinatra and Curtis, should be greatful she was born with dark hair. It is her only physical trait that comes close to looking black. The daughter of Russian immigrants would play a Puerto Rican 3 years later in West Side Story. Curtis plays his usual playboy type character, yet in a few scenes he is so flamboyant he acts gay.

The movie is a love story/war picture but it has more to say. There is so much in life that we have no control over. The best we can do is to learn how to deal with our lot in life. Monique is bi-racial. Sam is the third wheel. Britt is all flash and no substance. While at a school for war orphans, Monique tells Sam that, “Everyone in the world has some kind of a burden, but it is not the burden that is important, it is how you carry it.”

Kings Go Forth is a great movie! It ends on a very realistic note, which is unique in Hollywood films, but it does not make for a satisfying one. I don't want to give it all away, but there is much to be said for a happy ending. 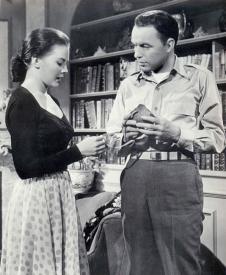 Natalie Wood and Frank Sinatra in Kings Go Forth.

I didn't find this movie to be all that original. The plot device of two soldiers in love with the same girl during a war has been used many times from Wings to What Price Glory (to name just two examples off the top of my head). Usually one of them winds up dead, while the other gets the girl. The formula alternates scenes of the two men in battle with them wooing the girl while on leave. I did appreciate the fact that they shot some of the movie on location in the south of France. It adds a level of verisimilitude missing from earlier war pictures shot entirely on studio backlots.

Kings Go Forth adds an interracial angle that was rare for the 1950s but the casting of Natalie Wood as a biracial woman dilutes the film's intended message of racial equality. When Merle Miller was adapting his screenplay from Joe David Brown's novel the original intention had been to hire Dorothy Dandridge to play Monique. But the producers lost their nerve and Dandridge lost yet another role to a white woman. How can a movie make the argument that race doesn't matter when race so obviously mattered in the casting of said movie?

Eric mentioned the fact that Sinatra and Curtis were both too old for Wood. For the record Sinatra was 42, Curtis was 32, and Wood was just 19, when this movie was made. But the most glaring age discrepancy belongs to Leora Dana as Monique's mother. She was just 34 at the time. In real life Sinatra was about the same age that the character of Mrs. Blair is supposed to be in the movie, yet he's playing a young soldier and Monique's mother is supposed to be solidly middle-aged. Oh the unfairness of Hollywood's treatment towards women and aging.

I do concur with Eric on Sinatra's performance. He is quite good as the noble American soldier on the losing corner of a love triangle. As mentioned above, Curtis plays his usual cocky ladies man, a role he excelled at with his good looks and street-wise persona. I didn't notice any particularly flamboyant mannerisms though. As for Wood, she was stunningly beautiful and a decent actress but horribly miscast here, and her French accent is at times laughable. In one scene a despondent Monique tries to drown herself. Given Wood's fate it now seems darkly ironic.

I disagree Eric. Kings Go Forth is not a great movie. It's a run of the mill war picture that purports to having a social agenda. In reality the casting of Natalie Wood proves the exact opposite of what that message is trying to say. 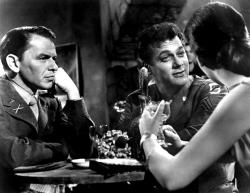 The fact that a movie that deals with racism features a Caucasian actress playing a woman with a mixed heritage is rather ironic, but also inevitable due to the production code, which prohibited interracial relationships. Even implying there was a relationship between these two characters, when the audience knew the actress was white, was pushing the bounds of the admittedly weakening code. Another effect the code has on the story is eliminating the sex. Obviously the reason that Britt proposes to Monique is so that she will sleep with him, but the movie is never able to come out and say this. The only implication we get is that Britt is out all night with her once, but without any mention of what they were up to, of course.

I agree that Sinatra delivers a good performance. Although his singing would always overshadow his acting, he was actually quite a good actor when he stretched himself. Not showy, or deeply method, his low key, naturalistic style feels quite modern. Like Patrick, I didn't find Curtis to be overly flamboyant, but he does come across as showy next to Sinatra. Wood is adequate, but apart from a few moments of crying, she's not required to do much beyond looking good and sounding earnest.

The biggest problem with the story is its pacing. At nearly 2 hours, it drags at times and there's plenty of room for trimming. Unlike Eric, I thought the ending was predictable, especially following the scene where Britt reveals his true colors. From then on there's only one way the story is going to end. This lack of suspense is no friend to the pace of the story either. Even the final action scene when Britt and Sam are in the Church tower fails to build much tension.

Patrick called this a run of the mill war picture, but this isn't a John Wayne, god bless the marines, war movie. The war is the setting, but it's not the story. This is a message movie, but one that's handled too seriously and too heavy-handedly, without the slightest subtlety. It's not a bad message, and I like the line of Wood's that Eric quoted, but the message is delivered so clumsily that it loses too much impact.

Although I found this movie quite disappointing, at least its heart was in the right place. Without the production code restrictions and with the help of a tighter edit, it might have been something special.