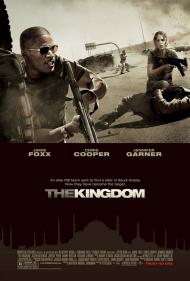 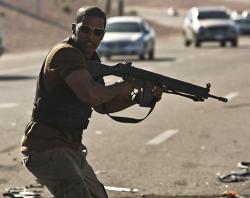 The Kingdom wants desperately to be a topical film. The movie opens with a brief history of Saudi Arabia and it's oil. The introduction ends right after 9/11 in which most of the men involved were Saudis.

The plot begins with an attack on a bunch of U.S. oil workers and their families living in an American compound in Saudi Arabia by Muslim terrorists. The movie then shifts to the FBI investigation team in Washington, that want to desperately go over there and solve the mystery, as well as enact some revenge. Much too much time is spent on the bureaucracy of getting the team to the middle east. The commercial for this movie would have you believe that this is an action packed film. Every action scene you see in the previews come in the last half hour of the movie. Granted, it is a very exciting, and some what forced, 30 minutes, but it leaves plenty of room for yackking and a whole lot of nothing.

As per the modern Hollywood politics, the movie bends over backwards to show good guys on both sides. Far to many scenes are given to a Saudi national police officer to show what a wonderful human being, fawning father and honest cop he is. I thought this was a Foxx/Garner film, but they do damn little of interest until the final extended action sequence. So wanting to seem fair, Foxx has a scene where he tells a Saudi prince that America is flawed but that they can still help with the investigation. What does America's flaws have to do with this Prince letting the FBI do their job?

Politically the movie only really overdoes it once. Foxx and the head terrorist both have the same vengeful line of dialogue. Yes, the United States is not a perfect place. This movie makes that point, and how else can you explain that a socialist like Hilary has a legitimate shot at the presidency. But to say that a terrorist that kills innocent men, women and children is the same as a law enforcement tracking down criminals is utterly ridiculous. Why is Hollywood so damn scared to call out a terrorist. It is okay to actually see this country of ours as the good guys, especially when we are fighting brainwashed, murdering fanatics.

And Hollywood as well as all liberals continue to wonder why conservatives consider them unpatriotic.