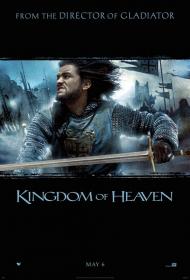 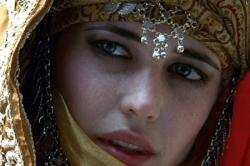 Eva Green in Kingdom of Heaven.

After Ridley Scott and Russell Crowe shook the dust from the sword and sandal epic with the Oscar winning Gladiator, moviegoers have been presented with several other attempts to reproduce the same results, but to no avail. Troy, King Arthur and Alexander flopped with critics and ticket-buyers alike. With Kingdom of Heaven, Scott returns to the genre in an attempt to show them how it's done. And although this movie is far superior to those other movies (it's enjoyable, for a start), it's highly unlikely that it will ever equal the stature of Gladiator.

Orlando Bloom, who just can't seem to keep a sword out of his hand while acting, stars as Balian, a blacksmith who discovers that he is the bastard son of Lord Godfrey of Ibelin (Neeson). Godfrey comes to Balian's village with an offer to take him along on his latest crusade to the Holy Lands. While at first Balian refuses, events in his village prompt him to change his mind and accompany his father on the trip.

Shortly after his arrival in Jerusalem, Balian is embroiled in local politics. At the moment, Christians control the city, but have an uneasy truce with the Muslims that allows any one the right to worship within the city so long as they pay taxes. The Knight Templars disagree with this policy and are looking to start a war. As you can probably guess, the truce is eventually broken and war begins.

As you'd expect in a Ridley Scott film, the movie is beautifully shot. The battle scenes are particularly well done, especially the siege of Jerusalem with flaming catapults and rumbling siege towers. There is also the requisite amount of blood spattering, but overall the gore is kept to a minimum.

Reportedly, worried about offending anyone in these volatile times, Scott took great care to show both sides of the conflict in an effort to demonstrate that there were good and bad men on both sides. Actually though, it is clear that he's only worried about offending the Muslim world as the Christians are roundly shown as sadistic warmongers. All of the good characters on the Christian side all denounce either god or their religion at some time or another.

While Bloom is best known as the idol of a million teen girl's hearts, he is obviously trying to mature his onscreen persona with this role. You can tell he's trying to do this because he sports a beard throughout the film. Naturally, it's a well-groomed beard, maintained to make him come off looking as good as he possibly can, but it's still a beard.

Perhaps not wanting to scare away Bloom's entire fan base, there is a love interest for him in the movie, but it really does little but slow down the action. There's no chemistry between Balian and Sybilla (Eva Green) and no real justification for their being together other than the fact that they're the two best-looking people in Jerusalem.

Kingdom of Heaven works as an action movie, but I didn't really care about any of the characters as individuals, including Balian. Fortunately, there's a lot of action. 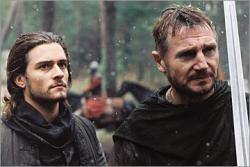 Orlando Bloom and Liam Neeson in Kingdom of Heaven.

Yes, there is a lot of action but the movie is as much about religion as it is war. The entire motive of this movie is that it is pointless to go to war for God, no matter what your religious beliefs are. Bloom gives a speech to the Christian population of Jerusalem, "What is Jerusalem? Your holy palaces lie over the Jewish temple that the Romans pulled down. The Muslim places of worship lie over yours. Which is more holy?" Later Bloom has a pow-wow with the Muslim army leader who asks Bloom if he will surrender the city. Bloom responds, "Before I lose it, I will burn it to the ground. Your holy places, ours. Every last thing in Jerusalem that drives men mad." The Muslim leader then says, "I wonder if it would not be better if you did." According to Ridley Scott, none of these people actually believe in what they are fighting for. I disagree strongly. Men have and do fight and die for things they truly believe in. It is Ridley Scott who does not believe in anything. The battle continues. Many more men die and then Bloom surrenders the city. Huh?

Although Ridley Scott does not have the balls to actually take sides, he does make a point to show Christianity in extremely bad light. The countless battle cry of the crusaders is "It is God's will!" Not because they actually believe this but because the leaders know that such a cheer can motivate the knights who do. Within the first 10 minutes of the movie Bloom kills a rude priest. As my brother wrote, Christianity takes a beating in this movie.

Due to the current political climate, many comparisons can be drawn to current events. These men fought for the ideals of their "God." Today men fight for the ideals of patriotism. Ridley Scott is a great movie maker. He creates films that can make you think. Bladerunner, Black Hawk Down, Gladiator, and Kingdom of Heaven all end without happy endings or any one person or army being the clear victor. In true liberal fashion he only sees things in shades of gray.

It is beautifully shot.

This movie IS fair and well-balanced in its representation of Christians and Muslims. There are noble men, as well as fanatics, shown on both sides. Of course we see more bad Christians than bad Muslims, 90 percent of the characters are Christians and it is told from a Christian viewpoint.

That’s not what’s wrong with Kingdom of Heaven. The main problem is the behavior of the hero. Let me get this straight. He’s the only man in a position to step in and maintain peace between the two religious armies, but he selfishly declines the offer to be made king and the hand in marriage of the beautiful princess he’s already been courting, for some vague personal reasons? Reasons soon rendered moot since all of the lives he wanted spared get taken anyway. WTF? I lost all my respect for him as the hero. Everything he does later is too little and too late.

The ending would have had more of an emotional punch as well. Imagine if, in the scene where he encounters King Richard the Lionhearted on his way to the crusades, instead of him having returned in defeat to his blacksmith shop, he had instead given up the kingship to return with his beloved bride (she of course gives up the throne as well for her true love’s sake) to his humble roots, having now redeemed himself by bringing peace to the Holy Lands. Makes for a much better ending doesn’t it?

And although Orlando Bloom looks, physically at least, like the heir apparent to Errol Flynn he lacks his oversized personality and charm. He plays the part too withdrawn and introverted. There’s no sense of fun or zest for life in his performance. Brendan Gleeson as Reynald has the right idea. He plays villainy with the perfect amount of ham.

Another problem is the pacing; it seems to go on forever, and Ridley Scott never finds another gear. Granted it is beautiful to look at and the action scenes are impressive, but I was disappointed.