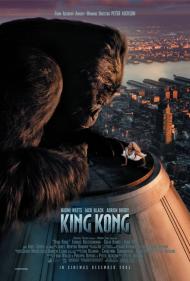 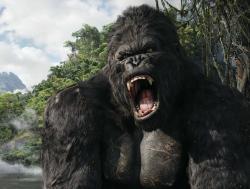 If there's a common theme to movies released in 2005, it has to be an overly long running time. In my opinion, the perfect running time for movies is 90 minutes for a comedy and 2 hours for a drama. Far too often this year though, especially in these last months running up to award season, we've seen far, far too many 2 and a half to three hour length movies. King Kong, at a full three hours is at least an hour too long. Like a meal of good cooking, it all tastes great, there's simply too much of it and you'll be fully sated long before it is over.

The set up to the movie, which isn't that complicated, but takes a way too long to get going, involves a down on her luck vaudeville actress, Ann Darrow (Watts) in 1930's New York who runs into an even more down on his luck movie director, Carl Denham (Black) who's about to sail off to an uncharted island to film what he hopes will be his masterpiece. When his star actress quits he hires Ann and along with a film crew, the script writer, Jack Driscoll (Brody), and the ship's crew of seedy adventurers, set off in a tramp steamer for their destination on Skull Island and with their destiny.

An hour into the movie and they finally arrive on the island where they are greeted by the not very friendly natives who kill several of the crew and kidnap Ann so that they can offer her to the giant ape Kong, whom they seem to revere as a god. By the time the gargantuan gorilla makes his appearance to swoop Ann off into the jungle, over an hour of the movie has already elapsed.

The middle and longest portion of the film involves the misfit crew's attempts to rescue Ann. This mainly involves them alternately running from and fighting a variety of CGI monsters, ranging from dinosaurs to giant insects. Most surprisingly to me was the fact that some of the special effects are obviously quite phony. Particularly when they are running from the Brontosauruses and the cliff is crumbling beneath them. Other scenes however, are both exciting and well put together.

While the crew is blindly crashing through the jungle, Ann, in the arms of Kong is being forced to contend with Tyrannosaurus Rexes and other creepier denizens of the island. In the movie's best action scene, Kong does battle with three of the Rexes in a knock down, drag out fight scene.

By the time Ann is rescued and Kong is captured, you are left feeling completely glutted on CGI action scenes. And I was also left wondering just how in the hell did all of these monsters manage to live for so long on one god damn island. I mean, just how big is the fricking place? The final climatic scene in New York is very well done, with the exception of the silliest moment in the movie when Kong and Ann share a “romantic" moment in Central Park. Coming as it does during one of the tensest scenes in the movie makes it particularly annoying. Which brings up another confusing aspect of the film. Is the relationship between Kong and Ann supposed to be romantic or that of father and daughter? Either way, it's a little disturbing.

As an action film Kong would have worked superbly if only it had about an hour of its running time trimmed from the final release. Obviously however, no one was prepared to tell Peter Jackson this, coming as he was so hot off of the success of Lord of the Rings. Because of this the final result for King Kong is that of a bloated and severely flawed movie. 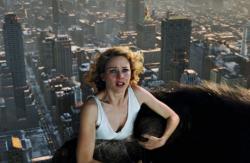 The Lord of the Ring's movies were based on a series of long winded books. It made sense that the movies were three hours plus. King Kong is based on a movie that ran just over an hour and a half. There is no reason for it to be so long.

Peter Jackson did the impossible with The LOTR movies. He turned an impossibly long, complicated story into film masterpieces. With all of the success from that series Jackson may have become too full of himself. King Kong is just the story of a bored giant ape who likes hanging out with an actress.

As Scott wrote, the action scenes seem to go on forever, whereas they are the meat and potatoes to the movie, they do not come until after an hour of screen time. At that point in the movie you are almost ready for the climax of the film. While the main characters battle for their lives on the island my 10 year old asked if the movie was almost over. He was not bored with the movie. In fact he has a stuffed King Kong because he liked the movie so much. It just seemed at that point in the movie that is should be about over.

I actually enjoyed the first hour of the film where Kong is no where to be seen. However, it almost feels like a different movie. For this movie it should have been edited. Ann is an out of work vaudeville actress. We see her perform and talk backstage to fellow thespians. Early on she shares a couple of emotional scenes with an older gentleman and then says goodbye to him. He is never seen in the movie again. She gets turned down for a role and referred to a burlesque theater. All of that could have been cut. Start the movie with Carl looking for an actress. He finds her like he does in the movie.

The biggest problem with King Kong is that Kong is just an overgrown ape. How can the audience really invest any emotion into a movie about a monster? Okay, so he is a lonely monster who saves Ann a bunch of times, but Kong starts the whole thing by grabbing her in the first place. So he does have what is coming to him.

Is there some messages in the film about leave nature alone, or we can all learn to understand each other no matter what our species. I have no idea? I just saw an action packed, special effects loaded film that went by fairly quickly for its running time, but still could have been trimmed for better results.

The original King Kong, in comparison to the new one, had cheesy special effects and corny dialogue. Peter Jackson's expensive new version is visually amazing 99% of the time. But, as both my brothers pointed out, 2005 Kong is bloated and slowly paced especially when contrasted with the 1933 original.

I agree with Eric, the movie should have started with the search for the actress like the 1933 version, which opens with a shot of the tramp steamer getting ready to leave port. This is followed by a short scene where Denham meets Ann Darrow and convinces her to join his adventure.

Also most of the journey to Skull Island should have been cut. We really don't need to get to know all the crew members, most of them will die or at the very least be gone from the picture by the time the action switches to New York City. And to be perfectly honest none of the three main human characters are all that interesting anyway. The ape has always been the star of the story.

The CGI action is fun but it crosses the line of believability too often. For example during the brontosaurus stampede you have Denham and Driscoll running around and between the feet of huge dinosaurs. This goes on for quite a while, but of course neither one is trampled. When main characters can so easily escape dangers in this impossible manner it lessens any real tension. Sure some of the smaller characters die gruesome deaths but there has to be a logical reason for the main stars to live beyond just the fact that they are the stars. Know what I mean?

The New York City scenes are very exciting and they do manage a bit of an emotional punch. The climax on the Empire State Building is beautifully shot. Still I had stopped caring long before that.

In all honesty I'm glad this version has failed to surpass the original. Cheesy special effects and corny dialogue notwithstanding the 1933 version is still a superior movie. 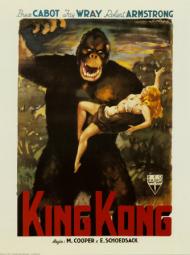