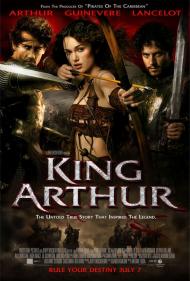 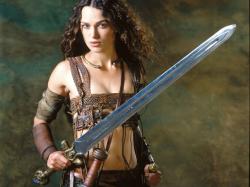 The story of King Arthur has been told so many times before that a new rendition seems a little redundant. This latest retelling seems aware of this fact, so it uses the hook that this version is based on historical fact and tells the story of the 'real' Arthur. In doing so, it removes all the magic, romance and grandiosity of the Arthurian legend. Unfortunately, those are the best parts of the legend. There's a reason they were added. It's called good storytelling.

Clive Owen stars as Arthur, not a King, but the commander of a Roman outpost in Britain. His knights are conscripted soldiers pressed into service by the Romans and uprooted from their homeland to guard the British border against the savage Picts. The names from the legend are all here; Lancelot, Galahad, Bors, and Tristan, but their personalities are nothing like their more traditional counterparts. Instead, the knights are a medieval version of the Magnificent Seven, only without the distinct characterizations.

When the Romans begin to pull out of Britain, they command Arthur and his knights to venture northward and rescue a highly placed Roman family from an invading army of Saxons. Along their journey, they pick up a female pagan warrior named Guinevere (Knightly), who not only knows how to shoot a bow with the best of them, but does it while wearing a leather bikini, and using a very upperclass British accent. Given the prominence of Knightly in this movie's ad campaign, you'd think she was the star of the film, when actually she doesn't appear until nearly an hour into the story. As for the love triangle between her, Arthur and Lancelot, it is limited to Lancelot sneaking a peek as Guinevere bathes. And although Arthur seems to be in love with her, he shows more emotion towards Lancelot.

All of this setup allows for a battle scene every twenty minutes or so, but the characters are all so generic that it's difficult to care if any of the knights live or die. One of the few sparks in the movie is the villainous and gravely voiced Saxon leader Cerdic (Skargard). Here is a man who obviously likes to spend his afternoons off doing a quiet bit of raping and pillaging. By the time he faces off against Arthur's bland knights, you almost wish he would just get it over with and finish them all off.

While there is a lot of action -- filmed with high production values -- without an emotional center, it's difficult to care about the outcome of any of it. By removing the fantasy elements and without any real character development, the filmmakers have sucked the soul out of the story and all emotional investment we might have is gone.

It's interesting in the abstract to wonder about the true origins of the Arthurian legend, but in practice, at least as it's told here, its better to leave the story alone. The legend isn't broke, so why bother to fix it? 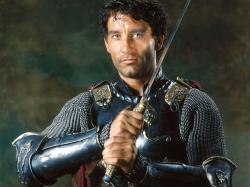 Clive Owen plays Arthur as a brooding bore. He has a blank expression on his face the entire film. Whether he is looking at abused peasants, fighting Saxons or having sex with Knightly, he always looks as if he is trying to remember his next line. He and all of his well groomed knights are completely unconvincing. Even the ones with long hair look as if they are rock star styled. Knightly is the least convincing of all. She is just too intelligent and gorgeous to be convincing as a warrior.

This movie is way to long. There are drawn out action scenes and in between there is lots of yacking about freedom and equality. The whole message of the film is that all men, and women, are born free and equal. I found it interesting that this film is based on English history and yet England still has a royal family, whose very existence points out the inequality of society.

As Scott wrote, there is no emotional investment. The movies tries hard to make a statement about freedom and patriotism. It's like combining The Patriot with Braveheart, only Clive Owen has a tenth of Mel Gibson's screen presence and talent. King Arthur is a hollow film that could have benefited from better casting and editing.