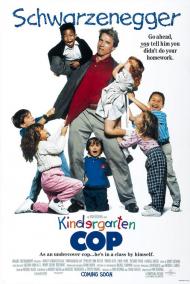 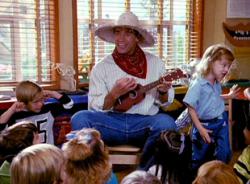 Arnold plays police officer John Kimble. He goes undercover as a kindergarten teacher looking for a child and his mother. The mother ran off with millions of dollars of drug money that she took from her criminal husband. Kimble knows that the child is a student at this school. In posing as a teacher he hopes to discover who the child and mother are. Once he finds them he hopes to use them to testify at a trial to put her scum bag ex behind bars for good. However, before Kimble can convince her to testify, the scum bag gets let out of jail and goes looking for his son.

Arnold rarely plays a character with a range of emotions. Here is the exception. Sometimes he is the tough cop shooting up a drug house. In another scene he is playing comedy relief with his classroom of 6 year olds. After walking in on his utterly chaotic noisy room of screaming children, Arnold lets out the loudest 'SHUT UP!' in film history. Maybe it's because I am a parent, but that scene kills me every time I see it. Arnold even does some rare romantic scenes in this movie.

This film allows Arnold one of his most varied roles. That is one of the best aspects of this movie as well as one of its worst. The movie is book ended by two violent scenes. Both show blood and death. The middle of the movie is full of G rated humor and an innocent romance. Kindergarten Cop tries too hard to appeal to Arnold's action fans by having these scenes of violence. Yet the point and humor of the film is all about a big tough cop put into a position where he has to be extremely delicate. That is a great idea! It's just too bad the makers of this film could not have shown Kimble as a hardened cop without using so much violence. It makes for an inconsistant flow to the movie.

This is Arnold's greatest job of acting. I am not talking Academy Award or anything, but he stretches here more than any other film. He does not share the screen with other big stars or have any special effects going on around him. This is Arnold Schwarzenegger single handedly carrying a good film.