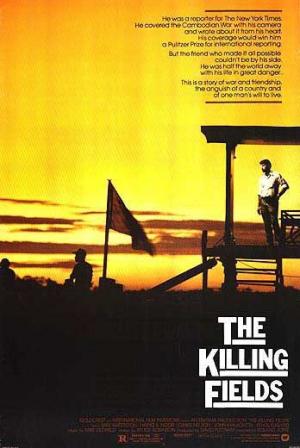 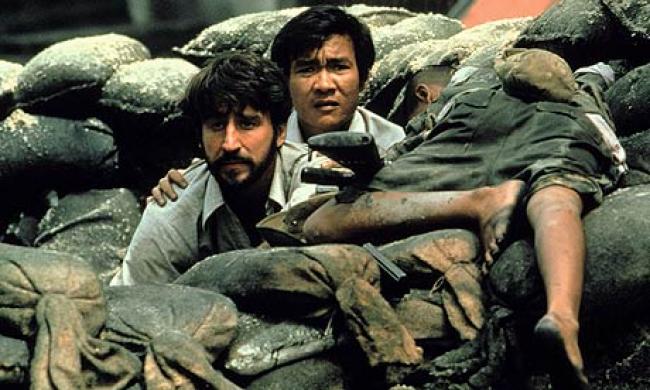 Sam Waterston and Haing S. Ngor in The Killing Fields.

The Killing Fields is based on the book The Death and Life of Dith Pran by New York Times journalist Sydney Schanberg, who passed away last week at the age of 82. This is the story of two men (both journalists) surviving during a bloody civil war. It begins in the Cambodian capital of Phnom Penh in 1973. Just as our decision to attack Iraq led to the creation of the Islamic State, so did the chaos from America's war in Vietnam result in the Khmer Rouge. An offshoot from the North Vietnamese Army, they were led by Cambodian communist Pol Pot. They attacked the Cambodian government in 1973 and were in power from 1975-79. During which time they committed mass genocide in which more than a million people were murdered, their bodies left to rot in what Dith Pran so aptly called, "Killing Fields”.

Sam Waterston and Haing S. Ngor star as these two journalists who developed an intense bond of friendship. They first meet at the beginning of Cambodia's civil war and survive several close calls together. In 1975 when all the embassies in Phnom Penh are being evacuated, Sydney gets Pran's family on the list of evacuees. Pran insists on staying behind to help his friend. What follows is a very tension filled scene where several Americans, including Sydney, almost get executed. Pran alone saves them. If he hadn't stayed behind this story would never have been told. Ironically, when the final evacuation happens, and the Americans leave safely, it is Pran who is not allowed to go. Thus begins his real terror as he faces capture-and-escape several times over the course of the next two years, before one day finding himself in a field littered with thousands of rotting corpses.

Sydney, meanwhile, has been looking out for Pran's family, now living in the United States, while pulling any strings he can to attempt to locate his friend. He wins a Pulitzer for his coverage of the war in Cambodia but is wracked with guilt since Pran only stayed behind for his sake. Pran eventually escapes and makes his way to Thailand and freedom. He is reunited with his friend, and his family, and together he and Sydney tell the world about the atrocities committed in Cambodia by Pol Pot's regime. Yes, I realize I've given the entire plot away but trust me that knowing the ending won't diminish the impact of this incredibly powerful motion picture.

The Killing Fields won eight BAFTA Awards and was nominated for seven Academy Awards including Picture, Director, Actor, and Screenplay. It took home three very deserved Oscars for Editing, Cinematography, and Best Supporting Actor for Haing S. Ngor. It was lushly filmed, the editing is often brilliant, and Ngor gives a performance for the ages. If you've never seen The Killing Fields, I highly recommend it.