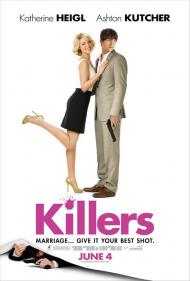 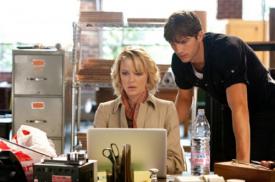 People want to kill Jen and Spencer, and you think your marriage is in trouble.

Recently dumped Jen, takes a trip to Nice, France, with her parents.  She meets shirtless Spencer in the hotel elevator.  He tells her he is going for a swim in the ocean, and they plan to meet for dinner.  Actually he is swimming out to a yacht where he climbs aboard and plants a bomb.  Spencer works for a secret government organization as an assassin.

They date, fall in love and get married, without Jen ever learning what her husband did for a living.  The movie really starts three years later in suburbia.  Spencer has quit his old job and now works in construction.  His old boss shows up and  people start getting killed.  Spencer and Jen become targets, and spend the rest of the movie fighting for their lives.

Killers is a typical Luketic movie, with a likable blonde stumbling her way through life.  Heigl is the typical Hollywood romantic comedy chick.  She is gorgeous, yet charmingly awkward.  Kutcher tries to stretch a bit, playing a worldly romantic action hero.   He partially succeeds.  He seems to spend most of the movie struggling to keep his typical "dude" persona in check.

Who really makes the movie is Selleck and O'Hara.  Selleck plays a father who never stops sharing advice, usually about security.  O'Hara generates the most laughs as the drunk mother.  I doubt she is sober at any point in the film.   Her best moment is when the four participate in a sharing circle.

Most romantic comedies have two beautiful people meet and fall in love for no apparent reason.  Killers tries to create some motives.  Spencer explains that he was an orphan and always wanted a simple married life.  Jen was recently dumped and falls for Spencer because she feels she can trust him.  Hey, I never said this was The Way we Were.

To keep the male audience members entertained, Killer has plenty of action.  However, as the action scenes take off, things start to seem ridiculous.  If you don't question too much and  just enjoy the nonsense, the movie is fairly fun.  The ending tries to explain it all, but it only partially makes sense. 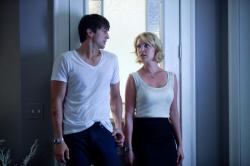 This is a lightweight, enjoyable little movie that you definitely shouldn't think too much about.  The ending actually makes no sense.  Without giving things away, I'll just say that the person who wanted Spencer dead could have killed him in many, much simpler and less expensive ways than this one. Since this movie isn't taking itself very seriously though, it's not that hard to forgive the plot hole.

Eric, you say that Kutcher seems to be working at keeping his "dude" persona in check, but I think he actually does a good job and maybe it's just the previous roles you've seen him in that is affecting how you see him.  I know that it took me a little while to get used to seeing him play the part so straight.

As for Heigl, she plays the same part here that she always plays.  The slightly flustered, conservative female character that's supposed to represent the average girl next door.  She's getting to the age though where you have to wonder is she ever going to play someone slightly more mature or sophisticated who doesn't get flustered at the mere sight of a man?

Selleck and O'Hara, especially O'Hara, are great as Jen's parents.  One of the funniest moments in the movie is when Jen asks her mother if it's too early for her to be drinking and instead of answering, her mother just laughs as if the very idea is one of the funniest things she ever heard.

The difficulty with making an action comedy is that if things get too dark and violent then it's not funny, but if it's too funny then it weakens the tension.  For the most part Killers manages to keep things balanced, but as things go on, the tension does start to ebb away as things get a bit more outlandish.

The general gist of this movie is what would happen if a James Bond type character got married, settled down and moved to the suburbs.  It's a funny idea that for the most part delivers on its premise.  It definitely works better as a comedy than an action movie though.