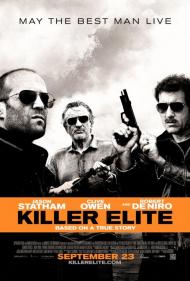 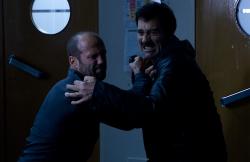 One of the last movies I saw before Killer Elite was Nicolas Winding Refn's Drive. The two movies have almost nothing in common, except both being "guy" movies, but I bring it up because Drive is very minimalist with its dialogue, which is a model Killer Elite should have emulated. It features some great action and a terrific trio of male actors in the leads, but nearly every time someone opens their mouth an awkward piece of clichéd dialogue comes out of it.

Jason Statham stars as Danny, a freelance killer for hire. When the movie opens Danny and his partner/mentor Hunter (De Niro) are doing a job in Mexico. During the hit, Danny hesitates because of a child and is wounded, prompting him to quit the profession. Cut to a year later and Hunter has been kidnapped by an Arab Sheik. The Sheik tells Danny that he will release Hunter if Danny performs a job for him. He wants Danny to kill three members of Britain's SAS who were responsible for the death of three of the Sheik's sons. Reluctantly Danny agrees. As he tracks down the three men, he comes up against former SAS officer Spike (Owen) who works for a shadow organization known as the Feather Men. Danny and Spike then go mano-a-mano and it's a race to see if Danny can complete his job before Spike catches up to him.

The movie is based on the novel "The Feather Men", which claims to be based on a true story, as do the captions at the opening and closing of the movie. However, critics have dismissed the claim as simply a way to sell books. The Ministry of Defence said, "Many events [author] Fiennes describes simply never took place. Frankly, it's just another example of the Special Forces' reputation being exploited for commercial gain."

Probably because they are following the book, we are told that the movie is set in 1980-1981. Apart from the lack of computers and cell phones though, you'd never know the year if they hadn't mentioned it. The fashions are all modern and very un-1980. The soundtrack features no popular music of the era.  Honestly I don't know why they bothered to mention the year at all.

The script is poor, with the story feeling tired and the dialogue filled with leaden phrases and peppered with cliches like, "Killing is easy; living with it is the hard part." and "You can't run from who you are." and this classic exchange between Danny and his handler, "I'm done with Killing." "But maybe killing ain't done with you." The writers also try to include a love interest for Danny, but they needn't have bothered and it never really goes anywhere.

Obviously the only reason to watch this movie is the action and in that one area the movie manages to deliver. It would be difficult to screw that up when you have Jason Statham and Clive Owen going head-to-head. De Niro has a much smaller part than his co-stars, but he makes the most of his time and performs some believable action even if he is 68. The very best moments in the film are when Statham and Owen fight each other. Statham proves once again that he's one of the biggest badasses working in the movies today, even managing to beat the shit out of an opponent while tied to a chair.

With such a cast I had high hopes that this would be something special. If you're a fan of Statham's or Owen's you will enjoy the action, but what could have been a classic and the start to a franchise, is instead just another guys and guns movie. 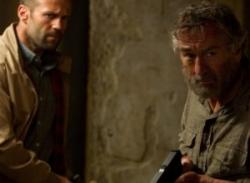 Killer Elite opens with an introduction of words on the screen talking about war, oil, bad economy and the world being in chaos.  Of course it is intended for everyone to think it is talking about current events.  Then a line appears stating this takes place in 1980.  Gotcha.

In truth, Killer Elite is making a comment on today's political issues between the west and the Middle East, as much as it is about 1980.   The entire cast of characters, minus Anne (Yvonne Strahovski doing a horrible Australian accent) are bad guys.   Everyone is out to kill someone else for what ever reason, be it money or revenge.  With that in mind, the film offers the audience no one to really root for.

The makers of Killer Elite must have understood that the lack of a clear hero would be an obstacle so they try hard to make that person Statham.  Every time he goes to kill someone, he tells everyone around him not to kill any innocent bystanders as if that somehow elevates him above all the other killers.  He thinks nothing of killing several British military personnel who killed a Sheiks sons, for reasons never fully explained.   Right or wrong, they were working under the directive of a government.  That is as much of a legitimate excuse to kill as Statham assassinating those same men to save a friend.

Killer Elite wants us to understand that in geo political issues, everyone has blood on their hands.  There are no good guys or bad guys.  We are all just self serving murdering bastards.  Wow!  What cynical fucking view of the world Killer Elite presents!

Although the plot leaves the audience not giving a shit, the action scenes were filmed well enough to keep you entertained.  Jason Statham plays the most overt, covert agent ever put on screen.  He does so much of his work out in the open, in the middle of the day that you wonder how he has not been caught already.  His charm alone is the only thing that keeps the audience caring at all that he lives.