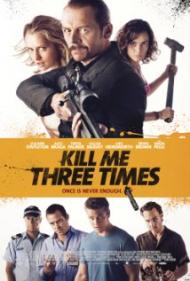 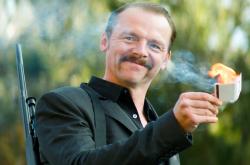 Kill Me Three Times currently has just an 8% fresh rating on Rotten Tomatoes and a 30 out of 100 score on Metacritic. Most critics seem to be complaining that it's too derivative of better films and most compare it unfavorably with early Tarantino. While I agree that it's not as clever as it wants to be and the Tarantino comparisons are apt, I still found it to be enjoyable enough, mostly because of the beautiful location, the likable cast, and the pace, which moves the story briskly along and ends in just under 90 minutes.

Simon Pegg is the film's biggest name, but this is really an ensemble piece rather than a starring vehicle for him. He does play the most colorful character as Charlie Wolfe, an assassin for hire with a Fu Manchu mustache and a penchant for dressing all in black. He's hired by bar owner Sam to murder Sam's wife Alice, who is having an affair with garage owner Dylan. Complicating the situation is the fact that Sam's sister Lucy and her husband Nathan, who are deep in debt due to Nathan's gambling problem, have plans of their own to murder Alice. There are other twists and turns to the plot that develop from there.

Even if the story isn't your cup of tea, the location can't help but impress. The film is set and was shot in a remote village on the Western coast of Australia. The scenery is breathtaking, with its sky blue ocean and the sweeping coastline. Its beauty is in sharp contrast to the ugly behavior of the human characters.

The story is told out of order. This allows the movie to begin in the middle of the murder plots, but adds little to the film. It could just as easily have been told in chronological order without losing anything. It also uses the title as a sort of structure, with captions dividing the film into sections subtitled, Kill Me Once, Kill Me Twice, and Kill Me Three Times. Apart from feeling like a gimmick, this adds nothing to the story and feels rather arbitrary.

It is the darker, more comic moments that are the highlights of the film. Pegg, playing against type makes a surprisingly effective bad guy. Wolfe isn't physically threatening but he has a presence that feels slimy and deadly. He brings his own brand of comedy to the character and balances the threats with the humor. Of the lesser known cast, Teresa Palmer is the standout as Lucy. As Charlie says about her character, "You're either the smartest or the craziest bitch I've ever met."

The script is by first time screenwriter James McFarland. It's not a bad freshman effort, but the Tarantino influences are obvious and he'll need to develop his own voice if he hopes to continue writing films. He lacks Tarantino's ear for dialogue and instead of feeling like an homage, it feels more like a ripoff.

Despite the retreaded feel to the film, there are still things to enjoy. Perhaps it's not worth the effort or cost to see in theaters, but fans of Pegg in particular may want to give it a watch once it's available for home viewing.

I'm with Scott on this one. Despite its many derivative elements Kill Me Three Times is still quite enjoyable. It breezes by and features a small but talented cast of actors in a gorgeous seaside setting. But boy is it unoriginal. Even the title sounds Tarantino-esque. The glorified violence and the non-chronological manner in which the story is told are both straight out of Pulp Fiction.

I agree with Scott that McFarland's script crosses the line between homage and ripoff. And his dialogue needs work. He does manage to insert a few laughs, and a memorable quip or two, but they are rather few and far between. And there's no payoff in telling the story out of order. As my brother wrote, it adds nothing to the movie except that the audience has to sit through several scenes a second time, only with more information. There aren't enough clever plot twists or surprises to justify this technique.

I also agree that Teresa Palmer, as Lucy, provides the most fun. She's the dominant half in her marriage, being smarter and more ballsy than her husband Nathan. She bosses him around and constantly criticizes and corrects him. In one scene he is trying to remember a security code. Suddenly it comes to him. “Beethoven!” He says proudly, “1812 like the Overture.” His wife instantly deflates her husband's ego by saying, “That's Tchaikovsky, you idiot.”

Simon Pegg is quite good as hired killer Charlie Wolfe. He's a predator and a loner, and his symbolic surname is way too obvious. But Pegg imbues him with a real sense of danger without losing his comic edge. It's too bad the script wasn't more worthy of the character. The oldest Hemsworth brother, Luke, has a supporting role. Like his two younger brothers he's handsome but they're all a bit interchangeable. They're sort of like an Australian version of the Baldwin brothers from 20 years ago.

Kill Me Three Times is sure to be quickly forgotten but if you do come across it late one night while looking for something to watch, you could do much worse than this copycat movie. 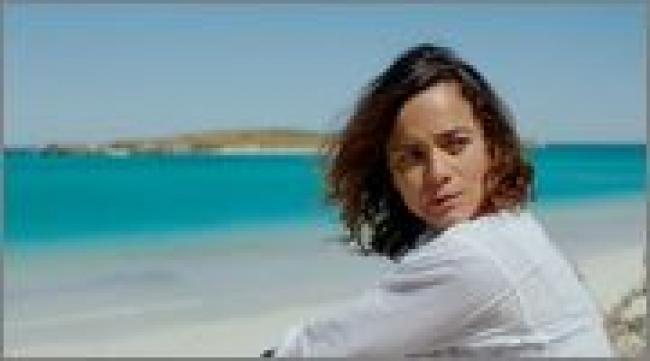 I like Patrick’s comparison of the Hemsworth brothers and the Baldwin brothers. Yeah, any of them could have played the part of Dylan Smith but then almost any actor could have. However, Dylan is the film’s most likable character. Everyone on screen is a criminal. Sure, you could make the point that Alice is a victim but what is there to like about her? She chose to marry a psycho and then have an affair on him. To further prove her idiocy, this moron never even used birth control when banging her secret lover. She may not deserve to be murdered but she invites far too much shit into her life for me to root for her.

Although I was none too concerned with the welfare of this group of felons, I was curious how the story and how all of its mishaps would play out. The plot has some surprises but many scenes are telegraphed far in advance. We know not only that the money in the safe and the gun Alice hands Dylan will come back into play but can also pretty much guess how and when.

I agree completely with Scott about Pegg’s performance. Perhaps it is his less than attractive looks, but he plays slimy very effectively.  Yeah, Wolfe is not physically threatening but a gun is, even though there is a running joke that he is not a very good shot. Look how excited he gets when he makes a good snipe from a distance into the quarry.

As my brothers noted, Teresa Palmer as Lucy is the only other person to stand out. Wolf may carry and use a gun but Lucy mostly uses other people to do her dirty work. At first we see Nathan as a killer, until he messes it up; forcing Lucy to take charge and show just how dangerous she can be. Her relationship with her brother is a bit under explored as she is so eager to kill her sister in-law. Does she love or hate him that much? Maybe the answer is simply Wolf’s quote, which Scott mentioned.

Kill Me Three Times kept my interest throughout even if I was never emotionally invested in these characters. For me, that was what reminded me most of Tarantino’s films. He creates unique scenes and situations but rarely a well-rounded memorable character.  Although this movie is fairly forgettable, I will take away just how gorgeous parts of the west coast of Australia are, especially that view of the beach. Wow!