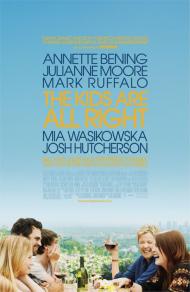 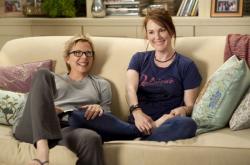 Annette Bening and Julianne Moore as the married with children Nic and Jules.

Before now I had been unfamiliar with the work of writer/director Lisa Cholodenko. It turns out she’s quite talented as The Kids Are All Right demonstrates. It features an intelligent, witty script with emotional punch and believable characters. It works as both a comedy and a drama although in my opinion the dramatic bits were the most memorable.

Annette Bening and Julianne Moore play a longtime lesbian couple with two children, a girl and a boy. When the girl turns 18 she begins a search, ostensibly for her 15 year old brothers’ benefit, to find out just who their father - aka the sperm donor - is. He turns out to be Paul, a cool, leather jacket wearing, motorcycle riding, organic farming and restaurant owning, 30-something played by Mark Ruffalo. Once he enters this families orbit complications ensue.

I was impressed by the acting. Mia Wasikowska and Josh Hutcherson are both wonderful as siblings Joni and Laser, the children of their “moms”. This being the way they refer to their parents as in, “Moms will be upset when they find out.” It is a nice detail. Annette Bening proves once again that she is a very talented actress. She is brilliant in the scene where they have dinner at Paul’s apartment. Julianne Moore and Mark Ruffalo are good but it is in their interaction that the movie loses its focus. The comedy (not to mention the motivation) in their scenes seems a bit forced.

I have read several conservative reviews for this movie where the critic can’t seem to get beyond the fact that The Kids Are All Right “normalizes” a family headed by two women. I am curious as to what my brother Eric will think about it as he is always bemoaning the absence of the “traditional nuclear family” on the big screen. I, for one, was moved to tears during the final 20 minutes or so of this groundbreaking film. The Kids Are All Right is a wonderfully written and acted movie about family. 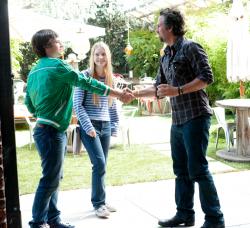 Josh Hutcherson, Mia Wasikowska and Mark Ruffalo in The Kids Are All Right.

I must confess that I wasn't expecting a lot from this movie.  I was expecting it to be a bit preachy and show an idealized family with lesbians as parents, with the whole point of it being, look at this perfect family.  Instead it goes to great pains to show this family as "normal" (a fact that will annoy a whole bunch of people I'm sure).  The parents are having marital difficulites.  The kids are starting to rebel and pull away a bit, but nothing overly dramatic, just in ordinary mundane ways.  The script is written in such a way that you could have put a man in Bening's role and made the kids adopted and you wouldn't have needed to change much of the script.  Hollywood has made so many dysfunctional family movies, that it's nice to see one where the word quirky can't really be applied.

Unlike you Patrick, I can't say that I was moved to tears by this movie.  In fact, it was that line in your review that worried me most.  That's not because I didn't care about the characters, but because it never gets heavy enough to really cause tears.  There are problems and drama, but there's also humor to counter-balance it.  It's touching, but not a tearjerker.

The character I found most interesting was Paul.  Here's a guy who suddenly discovers that he has two children and it's obvious that he's surprised by how much he doesn't mind and actually enjoys the fact.  He envies Nic's life, which partly explains his actions.  His ending was the least satisfying to me.

There's been a lot of award buzz floating around this movie, especially regarding Bening.  She does do a good job, but I'm not prepared to give her the award yet.  Because of the buzz I kept waiting for that one scene where I would think, okay, that's the Oscar moment, but it never really comes.  As good as this movie is, I have to wonder if a man had played Bening's part, if it would even have been made and would it be getting any award attention at all?

Patrick, you wonder what Eric will think of this movie, but personally I'm not happy about writing my review before him as I'm quite certain, based on his comment on your review, that he will be ready to leap and pick at this movie and both of our reviews. 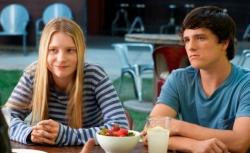 I agree with one point in each of my brother's reviews.  For Patrick's, I agree that the relationship between Jules and Paul is wrong.   Jules is way past the experimenting age.   I get that she is attracted to strong willed people, as both Nic and Paul have their shit together and Jules is a bit flighty.  Having them become so close so fast did not ring true for me.

For Scott's I will help answer his question.  Yes, this movie would have been made had it been a man playing Nic.  It would have been on the Lifetime channel and no one would have ever thought to give the actor an award, no matter how good the acting.

The entire interest in this film is that it is about a lesbian couple with children.  Plain and simple.   Nothing unique happens in this film, other than it happens to a gay couple.   Other than when I wondered how they get off to gay male porn, I was fairly uninterested.    The fact that this moved you to tears Patrick shows what a major bias you have. "I was moved to tears by the fact that it shows a couple of the same sex in a long term marriage having problems but ultimately sticking it out."  Had this been a straight couple, would you have felt anything?

Can children of gay parents grow up to be alright?  First of all, is "alright" the goal for raising children?  Fathers and mothers each play a unique  role in the development of their children.  Whether you like this or not, a woman cannot substitute herself for a father, any more than a father can become a mother.  I am offended every time a single mother or, in this case, a lesbian couple suggests otherwise.  As a man, my fatherly duty did not end at ejaculation.

It takes a man to make a boy into a man.  When a mom tells her son that he is now old enough to do something, it is not the same as when a father says it.  "You are big enough now.  You can pump the gas into the car."  When a mom says that to her son it may be something new and fun to the son, but it has less meaning.  If a dad tells his son that, it is an invitation and an acceptance toward manhood.  No matter how the woman words it, it will not have the same affect as it does coming from his father or a father figure.

In that is the good news.  Boys who do not have a biological father in their home are not doomed, but they must have a male figure to guide them.  This can be a grandfather, uncle or stepfather who spends lots of time with them.   This is why so many boys of single mothers finds themselves in gangs.  It has been a while since I looked up the statistic, but the percentage of men in prison, who came from a single parent or broken homes is staggering. Young men instinctively search for a male role model even if they themselves are not conscious of the fact.  Just as Jules is attracted to people who have goals, young men need the influence of a man who at least seems to have his shit together.

One last note is that many women clearly do not get the bond between men.   Mask (1985), Twilight (2008)  and The Kids Are All Right were all written by women, and each feature a scene where men jokingly fight each other like they are ten year olds watching WWE Friday Night Smackdown.    That is about as realistic as men writing movies where sorority girls have topless pillow fights.