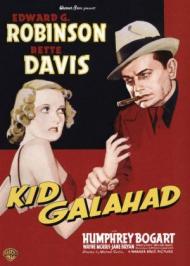 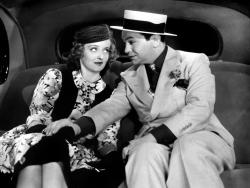 Kid Galahad stars the potent combination of Edward G. Robinson and Bette Davis. It also boasts Humphrey Bogart in one of his many supporting gangster roles from the thirties and is directed by the great Michael Curtiz. It would be remade in 1962 with Elvis Presley in the title role.

Bette Davis is Fluff, girlfriend of boxing promoter Nicky Donati (Robinson). At a party one night the reigning heavyweight champion insults Fluff and with a single punch gets knocked out by an innocent young bellhop who dreams of one day buying a farm. If you can't see where this story is headed you better get your eyes examined. Yup, before you can say Don King, Donati has a fight lined up for his 'Kid Galahad', which is the name Fluff gives the bellhop after he so gallantly defends her honor.

The story is pure melodrama. The starry-eyed fighter falls for Donati's even starrier-eyed kid sister and there is a subplot involving fellow gangster - I mean promoter - Turkey Morgan (Bogart) and a thrown fight. Trust me the details are unimportant. What matters are the performances of the three legendary stars. Whenever they are on screen the movie comes to life. Unfortunately too much time is devoted to the hackneyed romance between Kid Galahad and the kid sister.

This one is for fans of Bette Davis, Edward G. Robinson and Humphrey Bogart only.