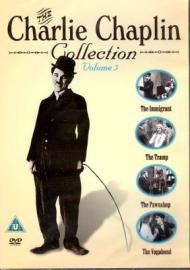 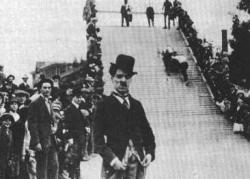 The first film appearance of the Little Tramp.

Kid Auto Races at Venice is exactly what it sounds like; a filming of the go cart races at Venice Beach. This picture is historically important as the first to feature Chaplin’s iconic Little Tramp character.

Technically this was the second movie that Chaplin made as the Little Tramp (Mabel’s Strange Predicament was shot first) but Kid Auto Races was released two days before that movie in February of 1914. It is the very first glimpse audiences had of a figure that would be world famous in a matter of months.

This short is only about six minutes long and consists simply of Chaplin getting in the way during the go cart races. He stumbles onto the track, nearly getting run down a few times and he gets in the way of a camera crew that is filming the race.

It is interesting to notice that no one in the crowd pays much attention to Charlie. At that time the Little Tramp didn’t exist in the public consciousness. He was just some strangely dressed guy getting in the way.

This movie offers little in the way of entertainment. It is remembered only as the movie that introduced the Little Tramp to the public. I guess that’s enough. 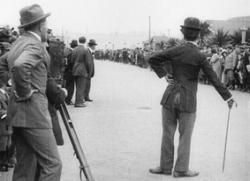 Actually Patrick, the crowd of people do stare at Charles Chaplin.  Even the photo on your review shows that they are.  Often it seems they do not know if they should watch the race or the funny looking man getting in the way.  I wondered if someone was going to get hurt as Chaplin distracted them so often as cars sped past.

Obviously the camera crew is in on the joke but the crowd looks clearly confused and curious.  Also like a skit from a Cohen film, the joke is stretched out too long.  This is only a six minute film but the joke is over after the two minute mark.  At least Chaplin did not stoop to such low levels as Cohen to get a laugh. 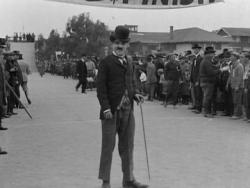 Charlie Chaplin goes to the Kid Auto Races and you'll never guess where.

This short blurs the lines between an early actuality film and  a comedy short with full fledged storyline and jokes. Audiences and filmmakers were obviously becoming used to movies and were no longer impressed with just watching film for film's sake, but needed something to jazz up the proceedings.

The camera crew that is in on the joke is part of the movie. The man pushing Chaplin around is Henry Lehrman, the director of this short. You'll notice that while he is pretending to get upset, an actual policeman walks into frame to push the crowd back but ignores Chaplin and the camera crew.

It's true that the crowd does watch the filming with interest, but that is most likely because of the novelty of seeing a camera in action. This is probably the first time anyone in that crowd had ever seen a camera crew in action. How many of them would go on to tell their grandchildren that they were one of the first people to ever see Charlie Chaplin's Tramp in action?