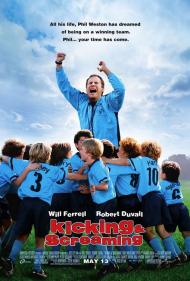 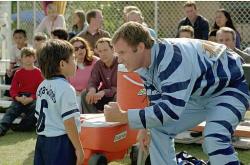 Will Ferrell in Kicking and Screaming.

Clueless coach takes team of misfit kids all the way to the championship game, is hardly an original concept in movies. There's been The Bad News Bears and The Mighty Ducks just to name two. Kicking & Screaming is another such movie and while it's the same tired old concept, what it does have going for it is its star, Will Ferrell. His performance is enough to elevate the story higher then it probably deserves to go.

Ferrell stars as Phil Weston, mild-mannered husband, father of one son, and the owner of a vitamin shop. Phil's ultra-competitive father, Buck, is played by Robert Duvall. When Buck trades his own grandson off the soccer team that he coaches to the worst team in the league, Phil decides to step up and coach that team to victory. To aid him in this quest, he enlists the help of Buck's next-door neighbor and mortal enemy, former Chicago Bears football coach, Mike Ditka. The team, naturally enough, is made up of loveable losers and misfits and soon both Phil and Ditka realize that they're going to need a couple of ringers, which they happen to find in the form of two Italian brothers who are so new to the US that they don't even speak English yet. But as the Team starts winning, what becomes more important, winning or having fun? Will Phil turn into his Father?

Pure Hollywood formula, I know, but Will Ferrell could read the Phone Book out loud and make if funny and he doesn't have to stretch nearly so far here. As the hapless coach with a great amount of repressed rage, Ferrell is a comedic delight. Ditka turns Phil on to the pleasures of coffee and caffeine, which only adds to Phil's stress level, and the laughs.

While in many of these types of movies, the children have equal or more screen time than the coach; here it is clearly Ferrell's movie. The children are never shown off of the soccer field and only a couple of them even have names or distinct personalities. And even those personalities are limited to, this one eats worms, this one's the cute one, this one's the funny one, etc. Ferrell is the movie's only draw and the filmmakers wisely understand that.

At the risk of sounding a bit like my conservative brother Eric, I do have a complaint about the movie's liberal attitude toward winning. Remember the old saying, "It doesn't matter whether you win or lose, it's how you play the game"? It implied that so long as you did your best, and played honorably, then you'd already won a victory of sorts. Well, somewhere along the way it's become, "It doesn't matter whether you win or lose, so long as everybody has equal playing time, no one is discriminated against based upon their skill level, and everybody has fun."

Another great Football Coach, Vince Lombardi once said, "Winning is not everything, but wanting to win is." But this is an attitude that seems to be condemned so often in today's kids' movies. Why are winning and having fun always presented as two separate ideas? Isn't it more fun to win? 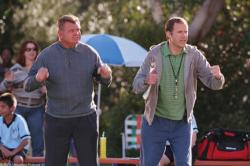 Mike Ditka and Will Ferrell in Kicking and Screaming.

I have coached youth soccer for a couple of years and this movie is fairly accurate in the liberal attitude that Scott mentioned. Only, it did not even scratch the surface. Coach's training stresses that youth soccer is not about soccer. It is about the children's confidence. In fact, the guy doing one of my training classes said "Youth soccer is 90% self esteem building and 10% soccer. We don't encourage competition, it will be there on it's own." We are instructed to pull our best players out of the game if we are winning. When my team wins, the players confidence and self esteem go up. When we loose it goes down. Sure, the kids should have fun while playing soccer, but what makes them have more fun than winning? Sorry for the rant, but I always find it interesting when liberals are utterly clueless of human nature.

As Scott wrote, Ferrell is the best thing about this movie. Some scenes is this movie are utterly pointless, like the backyard camp out or the battle in the coffee shop, but Ferrell is always a joy to watch, whether he is in the middle of a slow burn or completely losing it.

The movie does have its stereotypes. There is the black boy, the Asian boy, the big boy and, of course, the chinless Jennifer Anniston haircut boy. Duval revisits a scene from The Great Santini. In that movie he played a very serious game of basketball with his angry son. In Kicking and Screaming a plays a serious game of tetherball with his angry son.

Kicking and Screaming is a great family film that is intended to make a statement about competition, but anyone who has ever played sports or coached it will see right through its moral. I was more impressed with the moral that coffee is evil, but only real men drink it. 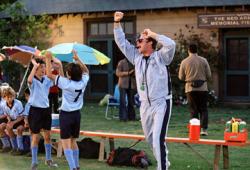 Will Ferrell as Phil Weston coaching The Tigers.

Eric (and Scott), your rant(s) are completely unjustified in regards to this movie. Hello! Their team wins the championship! Its message is absolutely that it is more fun to win. The idea of every player getting to play isn’t new. Back in the 1970s when I played Little League Baseball every player – no matter how awful they were – got playing time. Scott I don’t remember any scene in this movie that stressed that everyone should get equal playing time.

I’ve never been the big Will Ferrell fan that Scott is. Yes he is talented but his humor lacks any subtlety. His transformation from mild-mannered, vitamin-salesman to hyper-competitive, caffeine-fueled, soccer-coach has moments of hilarity but he often tries too hard for a laugh. And he is such a ham that no one else is allowed to shine.

All of the players and other parents are completely one dimensional. And as Eric said it is full of stereotypes. Of course the Italian kids are great soccer players and there is the lesbian couple with the adopted Asian son. This movie is another example of the mere fact of showing a same-sex couple being meant to elicit a laugh. Oh look Byong Sun has two mommies. Isn’t that funny?

Robert Duvall has made a career out of playing super macho, extremely critical father figures. The heart of this movie is about Phil coming to terms with his relationship with his father from whom he never felt approval. Unfortunately the humor is so broad that, unlike say the original Bad News Bears, it never creates any real emotional investment in the viewer.