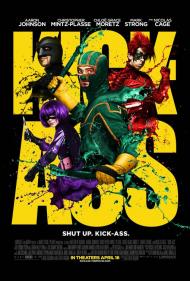 I usually review a movie within a day of seeing it. Due to circumstances beyond my control, I had to wait a week to write this. Although I may have forgotten some details, (I watch lots of movie), it was interesting to note what stayed with me the most, Hitgirl.

Never have I rooted so much for a little girl to succeed. Although only 11 years old, Hitgirl is one of the best action heroes to ever appear in a film. She takes no prisoners, and smiles her way through it. By the commercials, Kick-Ass is about a teen boy who becomes a superhero just because he thinks it will be cool. Although he is the catalyst to change, the movie is really Hitgirl’s.

Dave is your stereotypical Hollywood teen nerd. He knows more about comics than girls. For some reason he decides to make himself a superhero by wearing a scuba wet suit, and brandishing some clubs. Although his intentions are good, he soon finds himself in way over his head.

Meanwhile, an ex-cop and his daughter decide to don masks, as superheroes Big Daddy and Hitgirl, and seek out Dave. Whereas, Dave was more about helping people out in the form of muggers and petty theft, Hitgirl and Big Daddy are very focused on one goal; exacting revenge on a particular mobster. Their intensity and lack of subtlety frightens Dave off, at first.

What really stayed with me was the violence. Not just because it is there in spades, but because it comes at you in surprising ways. I will not give details, as that would spoil some of it. Also what is unique about the violence is that so much of it is exacted by a child, in a very cold blooded manner. The scene where she saves her Dad, and Dave, is intense.

Hitgirl is an eleven year old with the sense of humor of a drunken sailor. Her dad acts surprised when she tells him she wants a Bratz doll for her birthday, but then she smiles and says, “I’m just fucking with you Daddy. I’d love a bench made 42 butterfly knife.” Her language is anything but appropriate for a young lady, “Okay you cunts… Let’s see what you can do now!”

Kick-Ass is the greatest superhero film since The Dark Knight, and it is quite simply the best film of the year so far.

Kick-Ass is the most fun I've had at the movies in a very long time. It's funny as hell and features some very memorable characters. It's a rare comedy that manages to be both funny and action packed, but Kick-Ass does that perfectly.

Like you Eric, I found that Hit-Girl steals the movie. Dave's character is a stereotypical cliché, but Hit-Girl is a true original. Big Daddy, while a bit of a cliché, is played just insane enough by Nicolas Cage to make him interesting. I also think you have to give credit to the costume department because normally I would never have believed an eleven year old girl could do all of the things she does in this movie, but somehow when she puts on the wig and the costume, I'm completely willing to accept the situation.

The story is packed with violence, action, gore, humor and style. Sure, it's not for everyone. I mean you have to be able to enjoy a movie where someone is put in a giant microwave with the expected results. But for those with the stomach for it, Kick-Ass delivers whiz-bang entertainment.

Clearly the end of the movie is setting itself up for a sequel. So long as Hit-Girl is back I can't wait to see it. 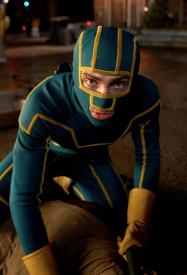 By my brothers’ reviews you get the impression that this movie is all about Hit-Girl. Well it isn’t called Kick-Ass for nothing. Sure she takes over at the climax and completely dominates every scene she is in, but too much time is spent with the lame Kick-Ass character, his even lamer friends and the girl he has the hots for.

Maybe my high expectations had something to do with it but I was quite disappointed during the first hour. Hit-Girl is one hell of a superhero and the second half of this movie is amazing. Even she bothered me a bit at the beginning though, while she was still dressed as Mindy. Her crude language seemed like a cheap attempt to shock. It isn’t until you know her and her father Big Daddy’s back story and see her in her Hit-Girl costume that she works as a character.

Big Daddy (Nicolas Cage at his most droll) is the next best thing this movie has going for it and I hope if a sequel is made we get to see more of him either in flashback or by him not really being dead. And let’s hope it’s called Hit-Girl. Now that’s a movie I would love to see. 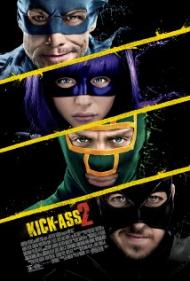