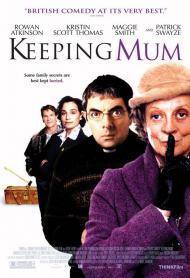 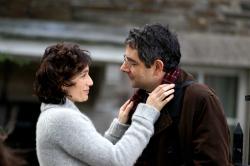 Keeping Mum is the most British of movies. It's a small story filled with slightly eccentric characters, plenty of British style humor and much of it revolves around self-effacing British politeness. It also features a great cast and a witty script that should help it appeal to even those who aren't as enamored of British films as I am.

Rowan Atkinson stars as the aptly named Walter Goodfellow, a vicar in the very small village of Little Wallop; population 57. His wife, Gloria (Scott Thomas), is frustrated by the lack of sex in her marriage since her husband is too involved with working on a speech for an upcoming convention at which he's giving the keynote address. She begins having an affair with her American Golf Instructor, Lance (Swayzee), and is very close to running away with him. Gloria and Walter's daughter, Holly, is having far too much sex, sleeping with every boy she dates. And their son, Pete, is the victim of bullies at his school. All of the Goodfellow family problems are carried out under the scrutiny of the local villagers. This isn't surprising since the main other source of interest in the village seems to be who will take care of the church's flower-arrangements.

Everything changes for the Goodfellow family with the arrival of their new housekeeper, Grace (Maggie Smith). She breathes life into each member of the Goodfellow family by various methods, some of which are quite extreme. I won't reveal exactly how, but let's just say she would be quite at home in the Brewster Boarding house in Brooklyn. If you recognize my reference than you can tell that this is certainly a dark comedy.

Atkinson is great as always in the lead role, despite playing a much more subdued character than he has in the past. Kristin Scott Thomas is equally good as the frustrated housewife. It is Maggie Smith though, who steals the movie as the sweet old lady with a past and a dark way of handling problems. Despite everything she does you never think badly of her. Even Swayzee is good as the lecherous American. Who'd have ever thought that you'd see Johnny Castle and Mr. Bean in a movie together?

Keeping Mum is a small movie that only got limited release here in the US, but is one you should look out for when it comes out on DVD.