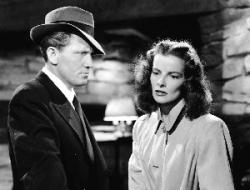 Spencer Tracy and Katharine Hepburn in Keeper of the Flame

After working so well with Spencer Tracy in Woman of the Year, Katharine Hepburn was eager to work again with Tracy, who had been cast in Keeper of the Flame as journalist Steve O'Malley, who returns from Europe to write a biography on a recently deceased national hero, Robert Forrest. Hepburn asked to play the female lead. The studio hesitated as Woman of the Year was a romantic comedy hit and this was a dramatic, political mystery. They, of course, relented and Keeper of the Flame became the second film in the Tracy/Hepburn team ups. Although it made a profit on its initial release, it was their least financially successful film.

Robert Forrest was a former war hero and nationally recognized figure who had started a popular political movement called Forward America Association. One rainy night, his car went off a bridge and Forrest was killed. Although almost everyone seemed to love Forrest, O’Malley starts to think more and more that Forrest was murdered.

Forrest lived on a huge estate with several homes on it. His widow, Christine, played by a still youthfully attractive Hepburn, is a recluse on the estate who refuses to talk to any reporters. Leaving Clive, a spokesman of Forrest’s, to deal with the reporters. With the help of the gatekeeper’s distraught son, O’Malley is able to sneak onto the estate and meet Christine. She knows him from his work but is utterly unwilling to help him write his story.

Clive convinces Christine to assist O’Malley in his writing endeavors. Clive believes they can use O’Malley’s writing to help in their cause, the cause being the bigger mystery than how Forrest died. Christine seems to want to encourage the hero worship image of Forrest, all the while giving the audience slight hints on the truth of Robert Forrest.

His organization was called Forward America Association, with the term, “Forward” being the key word. Another clue is when Christine tells O’Malley how popular Forrest was when they visited Germany and France. Because of the political angle of this film, it may very well remain more relevant than originally assumed. His birthplace is uncertain. His supporters are mostly young idealists from all over the country. His mother is kept locked away in a house on the estate so as to keep her from talking to reporters. The media eagerly jumped on the bandwagon and wrote supportive articles on Forrest. SPOILER ALERT: His politics are secretly fascist. “Of course they didn’t call it fascism; they painted it red, white and blue and called it Americanism.” Does this sound familiar to anyone else?

Most of Hepburn’s and Tracy’s films together were politically or socially relevant. What makes Keeper of the Flame so different from their other films is the dark tone. This is as close to a film noir as they ever made together. Although I enjoyed it, it was a bit slow and lacked that light spark so often found in their other work. 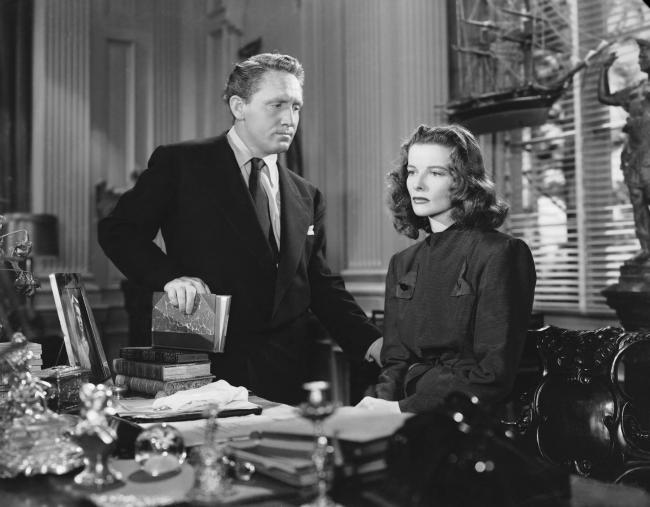 Spencer Tracy and Katharine Hepburn in Keeper of the Flame.

It's not hard to see why this film didn't fare very well in 1943. Audiences in the midst of fighting a world war, didn't want to see a movie about (*Spoiler Alert*) an American Icon who turns out to be fascist. They were too busy fighting a real Hitler to want to see a fictionalized right-wing, racist, anti-Semitic version of our own Hitler. Lowell Mellett, the head of the Office of War Information's Bureau of Motion Pictures disapproved of the film and legendary MGM chief, Louis B. Mayer, reportedly stormed out of a screening of it, angry over the way it equated wealth with fascism. Republican congressmen complained to Will Hays, demanding that the Motion Picture Production Code be amended to include clauses against producing leftist propaganda.

Seen out from under the shadow of World War II, the film is easier to watch, but it's not much better and those who made a fuss about its release need not have worried. Whatever message noted Left Wing writer Donald Ogden Stewart wanted to get across is lost in the heavy-handed delivery. The final denouement is delivered by Hepburn without a trace of subtlety and sounds more like a civics lesson delivered in a Political Science 101 class than movie dialogue.

The pity is that the first half of the film is quite intriguing. There's a dark and ominous feel to the story while we wonder about the mystery of this famous man's death. Eric's probably right that this is as close as Tracy and Hepburn ever got to a film noir. Even though I don't think it meets the criteria of a film noir, I know what he means. There are some camera shots that could be from a noir film. And while we wonder what Hepburn's character's real motives are, she does seem to be playing the part of a femme fatale.

It's too bad the movie didn't stay in the noir mode. The entertainment lasts only as long as the mystery does. It's fun watching Tracy snoop about trying to worm his way into the Forrest household, flirt with the female reporter, and befriend the young boy. By the third act though, when the payoff starts to become obvious, the story starts to lose its way and spin its wheels a little.

Although it doesn't show, reportedly Tracy was drinking heavily while filming. His relationship with Hepburn had recently begun and those on set with them have mentioned that she was his constant companion and nursemaid during production. She kept him sober long enough to shoot his scenes and positively doted on him, according to eyewitnesses. Tracy, so was said, took her devotion for granted and often seemed to be ignoring her. On camera though, Tracy remained a professional and his performance is quite good. Hepburn's is the supporting role, and while I agree she's never looked better, isn't really given all that much to do.

This isn't typical Tracy/Hepburn material, but that actually made me more intrigued to watch it. It was interesting to see them in something besides a romantic comedy. It's just too bad it had to happen in this clumsy melodrama. What a wasted opportunity. 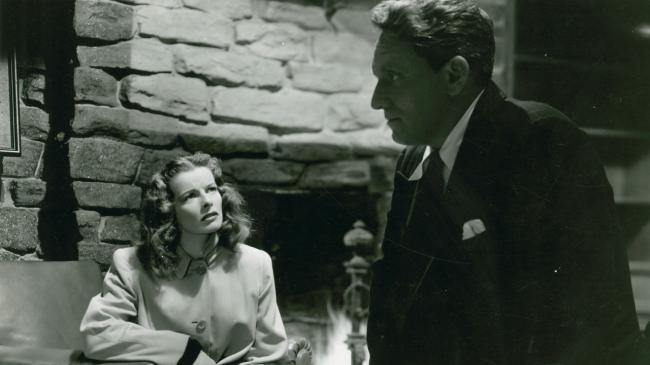 Katharine Hepburn and Spencer Tracy in Keeper of the Flame.

Like Scott I found the opening set-up to be intriguing. However, for me the intrigue stopped the moment Spencer Tracy's journalist finally manages to find a way in to see Katharine Hepburn's reclusive widow. From there on the script is pretty much one big predictable yawn and I never bought the character of Christine.

SPOILER ALERT: She is the one responsible for her husband's death because she cannot stand the fact that he's become a fascist. So she's willing to see the man dead but somehow still wants to keep his memory sacred? And when she goes to burn up his papers and any evidence of his true political leanings and/or illegal schemes, she conveniently leaves the most damning evidence against him safely filed away. Wouldn't those papers be the first things she would destroy?

Tracy and Hepburn are both playing their stock characters here but Christine is a bit of a departure for Hepburn. Although she's still an upper-class New England type, she rarely played a character of such questionable morality (and she rarely died in a movie). The closest other role I can think of is her mad mother -also hiding a secret- in Suddenly, Last Summer (1959).

Clearly this is left-wing propaganda posing as a movie. Fascism is a favorite target of liberals (the fear of one person with too much power) just as Socialism is for conservatives (the fear of too many people with too much power). Republican members of Congress were outraged upon the release of Keeper of the Flame. But they would take their revenge a few years later in the form of witch hunts against anyone in Hollywood labeled a Communist.

My favorite scene comes courtesy of the wonderful Margaret Wycherly. She plays the dead man's elderly, mentally-ill mother. She plays her one scene to the hilt, easily stealing it away from the movie's stars. Her most famous role, of course, was as another mother. It was she to whom James Cagney declared, “Made it ma! Top of the World!” in White Heat (1949).

Spencer Tracy and Katharine Hepburn are a revered classic movie couple, and deservedly so, yet I've always preferred them apart. Keeper of the Flame is easily one of their weakest films together as well as being one of George Cukor's least inspired directorial efforts.