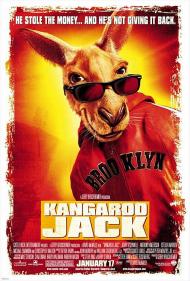 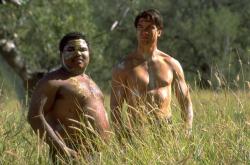 Kangaroo Jack is a mixed up pizza of childish toppings. This is a buddy movie of unoriginal portions. The movie will leave you empty and hungry for anything with substance.

Two best friends from Brooklyn are sent to Australia by a mob boss to deliver some money. Unknown to them is that the money is payment to an assassin who is going to kill the friends as soon as he gets it. While driving in the outback to deliver their death sentences, the two clueless New Yorkers hit a Kangaroo with their jeep. Being tourist, they put sunglasses and a jacket on the Kangaroo to take cute pictures of him. The Kangaroo comes around and hops off with the money in the pocket of the jacket.

The two friends spend much of the rest of the movie pursuing the critter with only cartoon humor effect. Not even a good cartoon. This movie is like an episode of Coyote And Road Runner with bathroom humor. Flatulent camels are played for laughs. My seven and nine year old were mildly entertained. I had to force my self to pay attention, as this movie is duller than a stupid cartoon coyote chasing a scrawny bird.

The previews for this movie showed a talking and rapping Kangaroo. This scene is the one my sons found the most enjoyment. The makers of this movie should have gone a different route and had the animal talk the whole movie. Sure that would have been stupid, but with this movie what the hell is there to lose?