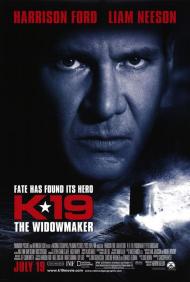 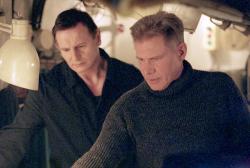 Liam Neeson and Harrison Ford in K-19: The Widowmaker.

Hollywood has long enjoyed using a submarine as a dramatic setting. You have close quarters. You usually have the captain as all powerful. All the main characters are located in a single area. Conflict between characters is inevitable.

Harrison Ford plays a Russian captain chosen to take a new sub out to sea. It is 1961 and the Soviet Union wants to impress the Americans with their new weapon. The submarine is anything but ready. There are leaks and loose hanging wires. The nuclear reactor officer is found drunk. The ships doctor gets hit and killed by a truck and worst of all, at the christening the wine bottle doesn't break on the hull. So with a rookie reactor officer and a last minute replacement doctor, who gets sea sick, K19 heads out to sea.

Ford, with decent Russian accent, comes off as the heavy. He is the tough captain who constantly drills his crew to the point of exhaustion. After test firing a dummy nuclear warhead the sub attempts to return to home port. However, the nuclear reactor has other plans. It springs a leak in the coolant system and the sub loses almost all of its power. Meanwhile an American ship has found them and is observing their odd actions as they deal with the catastrophe.

Liam Neeson plays the executive officer. He, in fact used to be the captain, but was relieved of his command due to his casual treatment of the crew. So with the ship in serious trouble Ford's captain makes the decision to send in men to fix the leak. They do not have radiation suits and thus he is sending them to their death in the name of saving the rest of the entire crew. Neeson, who is very familiar with the ship's company has some issues with this and here lies the conflict. This movie is based on true events. This proves to make the tension all the more real, but it also takes away from it. I had already read about the history of this ship and thus knew the outcome. I will not spoil that for you if you do not know.

Ford and Neeson's characters go head to head in a few scenes but the conflict between them never rises to an exciting level. We see the grotesque result of radiation poisoning, but the movie lacks in action. These men were in an incredibly awful situation, but how can I feel sorry for them when all they had to do was ask the American destroyer for help.

The pace suffers from the real life events. The film makers are forced to give details that help understand the event but do not necessarily quicken the plot. This includes a near 20 minute suffix.

Ford does a great job in that this is one of the few Ford films where I occasionally forgot I was watching a Harrison Ford movie. Neeson is fine as ever. His good acting almost makes up for his utter lack of screen presence.

Not the best submarine movie I have ever seen, but Harrison Ford fans may find it quite interesting to see their film hero do one of the biggest acting stretches of his career.