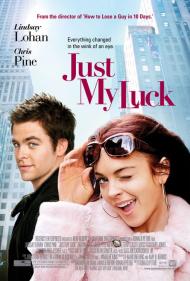 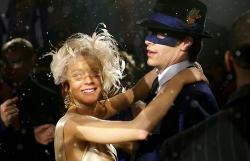 Lindsay Lohan and Chris Pine in Just My Luck.

ust My Luck takes an intriguing idea and goes nowhere with it. Lindsey Lohan, despite her constant tabloid appearances, does have charm as an actress as she's proved with movies like Freaky Friday and especially Mean Girls. This movie's problems are so great though that no amount of charm can save it from being anything more than mildly entertaining in its best moments and just embarrassing in its worst moments.

Lohan stars as Ashley Albright, the luckiest 20-something girl in New York City. The rain stops whenever she steps outside, cabs vie for her custom and even the city's traffic lights obey her will. Her luck even gets her a promotion at work when she meets with Damon Phillips, a record company executive and client of the PR company where she works. She sells him on the idea of putting on a charity costume party to promote his company. In short, things couldn't be going any better for her.

On the other side of the coin, Jake Hardin has no luck at all. If it's raining, his umbrella will break. If he finds money, it's covered in dog shit. He is Murphy's Law personified. The only thing he has in common with Ashley is his desire to meet Damon Phillips. Jake is managing a British pop band and wants to get them a meeting with Phillips, but his bad luck prevents him from succeeding at every turn.

The two meet when Jake sneaks into Ashley's party. After they share a dance and a kiss, miraculously Ashley's luck is transferred to Jake. He soon finds himself saving Damon's life, which provides him with a chance to show Damon his band. Soon Jake is living the high life. Meanwhile, Ashley soon finds herself fired and homeless.

Since this is a romantic comedy that contains no surprises you can guess how the movie will end. And that's just one of the movie's problems. Ashley's good luck is cute and amusing for a few minutes, but they don't go far enough with the jokes. The movie's one concept premise isn't really enough to sustain a whole movie. It would have made a funny five minute skit on Saturday Night Live, but a 140 minute movie requires more. Any movie that stoops to an overflowing washing machine for humor (an idea that was old when it was done on the Brady Bunch) is surely in trouble.

With the comedy lacking, you'd hope the romance would help make up the deficit, but it's disappointingly generic. Chris Pine as Jake does nothing special, although in his defense I can't really imagine any actor could do much more with this material. There is also a genuine lack of chemistry between the two leads and you could almost imagine that they're brother and sister so lacking is the heat between them.

I suppose twelve-year old girls, who seem to make up a large portion of Lohan's fan base, might enjoy this movie. For anyone else there is very little to enjoy here. 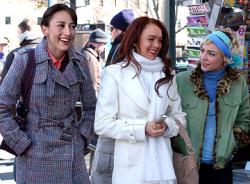 The charm of Just My Luck rides on Chris Pine's shoulders. He plays a luckless, yet likable, loser. He is getting through life as if life has something personal against him. If you want anyone to succeed in the film it is him. Lohan comes across as a Paris Hilton type who has no problems whatsoever. Her luck is more annoying than funny. How can her friends stand to be around someone whom good things happen to without ever deserving them? When she ends up working at the bowling alley she just seems like Hilton doing an episode of The Simple Life.

The heat between Pine and Lohan is warm at best. However, it is a nice change from so many movies where characters base love on having had sex. Since they switch luck by kissing, it fits the plot to have them abstain from too much physical contact.

If only Lohan had played Ashley a bit less pretentious, she may have come across more likable. She eventually learns that the world does not revolve around her, but the fact that she has to “learn” that fact, speaks volumes about her self centered character. Jake has humility and a decent outlook on life. Unfortunately, the movie is more about Ashley than Jake.