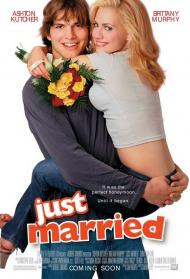 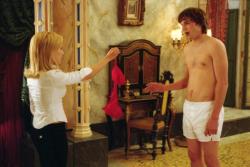 Just Married is a funny couples comedy with a bit of heart. When my wife and I were at the ticket counter we asked the young girl working there if this movie was good. "It's okay." She responded. My best guess is that she is not currently in a relationship, because this movie has something in it that any couple can relate to.

Ashton Kutcher plays Tom, a DJ who works the graveyard shift at a radio station where he gives local traffic updates. Brittany Murphy plays Sarah, the daughter of some snooty multimillionaire. They meet, get married and go on the greatest no sex honeymoon ever. Their different backgrounds mean nothing to these two kids in love.

On their honeymoon, however, their differences become obvious. She speaks several languages and appreciates art and history. His idea of a good time in Venice, is to watch a Dodgers baseball game in a bar that caters to Americans. The plot gets more complicated when a former boyfriend, Christian Kane, shows up at the same hotel.

The couple nearly sets a French castle on fire and get stuck in a snow bank in the Alps. All of this is just background as we watch this "perfect" couple discover what every couple in history had to find out for themselves. That there really is no such thing as the perfect mate. We all have faults and learning to live with those faults is what makes or breaks a marriage. In fact, watching this movie with your partner in life is wonderful because you can look at these bickering spouses and see yourselves. You can love the hell out of some one and at the same time be just as mad as hell at them.

Some problems I had with this movie are the stereotypes. Hollywood stereotyping the rich strikes again. The bride's wealthy family, excluding the mom, are a bunch of stuck ups. I find it funny that we always read how rich people in Hollywood are, yet in the very movies they make they always cast rich people in a bad light. What is Hollywood saying about itself? Tom is the stereotypical ugly American. He wears a baseball hat all the time and demonstrates no appreciation for anything he sees in Europe.

I did like this movie, but it could have starred anyone else. Brittany Murphy is as cute as they come. She did some drama in 8 Mile and here does comedy well. Ashton Kutcher is just a doofus. He plays a doofus in That 70's Show. He played a doofus in Dude, Where's My Car?. Holy shades of early Keanu Reeves Batman? Christian Kane, who also played the jilted boy friend in Life Or Something Like, may have a decent career ahead of him if he can break out of that role.

This movie thrives on the humor in relationships. This couple argues one minute, then tries to find a place to have sex the next. Who in a relationship can't relate to that? A more charismatic male lead and some better characterization could have certainly helped this otherwise good situation comedy. 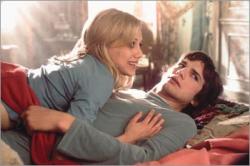 Eric is far too kind in his comments regarding this very unfunny comedy. He's right in that it's possible for any couple to see aspects of themselves in Tom and Sarah's relationship, but just because it's true, doesn't make it funny, or even entertaining for that matter. Where Eric really hit the nail on the head was in his last line when he referred to this as a "Situation Comedy", because that's about the quality of this movie. It's a Sitcom, and not a very good one either.

For this movie to have worked, I would have to have cared about at least one of the people in it. As it is, I didn't. She's pretty, intelligent and yet ditzy, with no real depth, while he's just, as Eric put it, a doofus. Apart from lusting after each other, you just have to accept on faith that these two want to get married.

The humor is at best crude, and not in a good way. It relies too heavily on slapstick. When the couple try to have sex in an airplane bathroom, the best jokes the writers could come up with is to have Tom's foot get caught in the toilet and to eventually have the bathroom door fly open and break the stewardess's nose. As for verbal humor, the highest it goes there, is to have Sarah's mom nicknamed, "Pussy." I can enjoy low brow humor as much as the next person, but it should at least be funny.

I do have to admit that by the time the honeymoon was over and the movie was limping along towards its inevitable ending, where Tom pours his heart out to Sarah, I was rooting for them to get back together, but only because they were both so annoying, they deserved each other.

Rather than a movie couples could enjoy together, I would say that this movie is a cautionary tale to those people considering becoming a part of a couple.