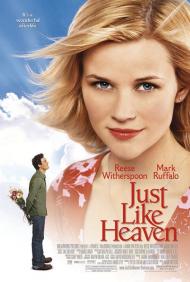 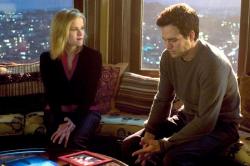 Reese Witherspoon and Mark Ruffalo in Just Like Heaven.

Just like Heaven is another showcase of Reese Witherspoon's charisma as a A-list actress. Here she plays a workaholic doctor who has no social life. She gets into a car accident and finds her spirit connected to the guy who is currently subletting her apartment.

Most romantic comedies have two good looking people who, for some unexplained reason, cannot find love. Just Like Heaven completely explains why the two leads are on the market. Elizabeth is too dedicated to her job to date and David's wife has recently died.

Elizabeth's spirit is connected to David and only appears for him. David, of course, freaks out at first and tries to have her exercised out of his apartment. He gets the help of a psychic book store clerk, played by Napoleon Dynamite himself John Heder. Instead of "friggin" his catch word here is "righteous." They eventually learn that Elizabeth is not dead but in a coma. The question becomes how to get her out of her coma and how to stop the hospital from pulling the plug.

Reese plays cute and charming like nobodies business. Mark plays a very wounded man who wants to drink himself into forgetting about his wife. Together they save each other. The movie is not as dramatic as I maybe making it sound. It does contain some great comic moments. Mark earns good comic points for the scene where he is in a bar possessed by Reese.

Although the set up is a bit original, it does play like every other love story. You know exactly where Just Like Heaven will end. However the road to that destination is more fun and unique than most. 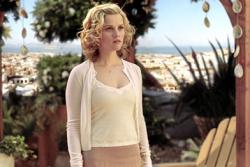 Two of the biggest prerequisites for any romantic comedy are attractive, likable leads. Witherspoon is loaded with both traits (she is clearly the Meg Ryan of 2000s) and Ruffalo more than holds his own as the male lead. It is their sweet earnestness that holds this unlikely comedy together.

Like Eric said, you might always know where this movie is headed, but that's the case of most romantic comedies. The true test is whether or not you care by the time the two leads get together and in this case you definitely do.

While the idea that someone's spirit might be able to leave their body while in a coma seems like the most unlikely aspect of the story, it isn't. The truly unrealistic aspect of this story is that Elizabeth's apartment would still be available to sublet by the time David gets to it. An apartment that size, with those views, a fireplace and a private roof overlooking the bay would be gone in about 15 seconds, no matter how short the lease. And just how can she afford to rent such a place? Resident doctors must earn an awful lot of money in San Francisco!

Judging from the previews from this movie way back when it was first released, I thought that Jon Heder was one of the lead characters. Having not enjoyed Napoleon Dynamite that was one of the reasons I avoided this movie. Turns out that was the just the publicists trying to capitalize on Heder's new found fame, because his part is very small.

Apparently I wasn't the only one who misjudged this likable little comedy. It didn't fare that well at the box office and was generally panned by the critics, ranking just 57% on Rotten Tomatoes. It deserved better and is worth checking out.