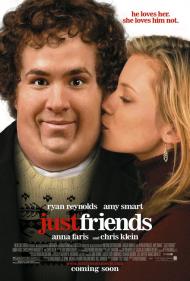 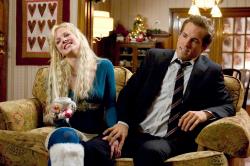 Just Friends addresses the sad issue of a boy who is secretly in love with a girl who sees him just as a friend. Is he an idiot for allowing this to happen? Is she a tease for leading him on? Those areas never get fully explored here but there are laughs to be found.

Chris and Samantha were best friends in school. Chris was overweight but in love with Samantha. Samantha never saw Chris in a romantic way so they were always just best friends. After a humiliating graduation party Chris moves to California, loses weight, becomes successful and beds many women.

While flying to Paris with a Britney Spears type pop singer, their plane makes an emergency landing near his home in New Jersey. He and the pop singer visit his mom and run into old friends including Samantha. Chris is still in love with her and tries to win her over one last time.

Ryan Reynold's is a great comedian. Like all good comics, Ryan says as much with his tone of voice and facial expressions as he does with the actual dialogue. The hockey game with the children had me rolling with laughter. Anna Faris steals nearly every scene as a pop diva. Or as she says, "I'm Samantha James, bitch!" Her tooth paste scene is hysterical. Julie Hagerty from Airplane plays Ryan's dizzy mother and has some great lines. At one point Ryan is on the phone and his mother picks up the extension to make a call. "Joyce! Joyce!" She says into the phone. "No. Mom, Im on the phone." Ryan says to her over the phone. "What are you doing at Joyce's house?" His clueless mother asks. "Mom, I m in the livingroom 10 feet away from you." He informs her. "Well, while I have you on the phone dear...what would you like for dinner?" She adds.

Where as I could relate to Chris and his situation about pining for Samantha I never felt that sorry for him. He is rich, good looking and gets plenty of sex. So what if Samantha was never interested? Obviously she was shallow to assume that just because he was fat that he didn't get erections.

Reynolds and Faris keep the jokes coming and if not all of them are home runs enough of them are at least base hits so as to make this comedy a winner.