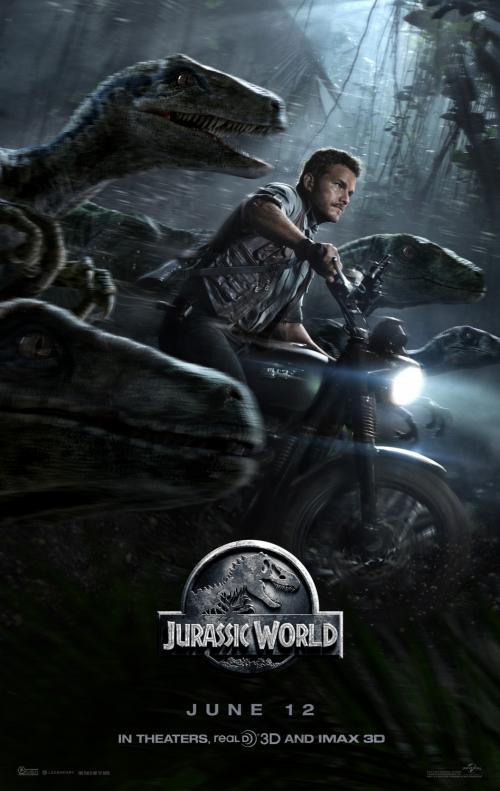 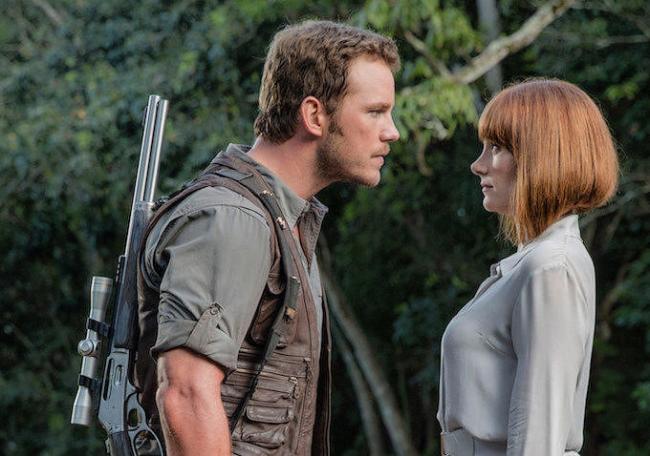 As Eric wrote in his review of Jurassic Park, there have always been a segment of society who find dinosaurs to be the coolest things. Many children seem to pass through a phase of finding the creatures fascinating. The Jurassic Park films have always played up to that fascination and combined it with that old idea of mankind getting ahead of itself with science that dates back at least to Mary Shelly's Frankenstein. It's a formula that's worked for them as each film in the series has been a huge hit and the long wait for this 4th installment hasn't slowed down the moviegoing public's appetite for dinosaurs.

The story is set some 20 years after the original film and the long planned Dinosaur themed amusement park is up and running (although presumably their insurance premiums must be through the roof). Despite its success, the owners of the park feel the need to keep thrilling the public and after they run out of genuine dinosaurs to clone, decide to create their own hybrid that will be the biggest and baddest yet. Naturally things go wrong when it turns out that the new Indominus rex is even more intelligent and deadly than they thought. Imagine a Velociraptor the size of a T-rex and you get the idea. It doesn't take long until it's on the loose and rampaging across an island filled with tourists.

Despite the frightening prospect of the film's premise, there are surprisingly few scary moments. As with the first three films in the series, this one is rated PG-13 and that limits the frights. There are deaths, but very little blood and zero amounts of gore. The story builds up the idea that if the Indominus isn't stopped it will slaughter thousands of island guests, but it's all just a tease. There's also a lack of suspense. There's a rising sense of tension as the film builds to its climax, but there's a marked absence of jump out of your seat moments.

Instead of frights, there's a sense of fun. The deaths that happen carry no weight, as they're just nameless extras for the most part, and cause seemingly no emotional distress onscreen. Instead, once it gets going, the movie moves quickly from action scene to action scene, sweeping us across the island through various environments where we see different species of dinosaurs, all leading up to the final battle that pits man against dinosaur and dinosaurs against dinosaur.

Chris Pratt stars as a Velociraptor expert. He brings his usual slightly comic charm to the role. Bryce Dallas Howard plays the uptight park executive who inevitably falls for him. Although they're both good performers, their chemistry isn't the strongest, although part of that is the nature of the story, which doesn't permit much depth. Only one actor from the original trilogy appears in this film, but eagle-eyed viewers should spot a picture of Jeff Goldblum on the back of a book's dust jacket in a couple of scenes, which is just one of several Easter eggs buried in the film.

A fourth film in the series has been in the works ever since the third film became such a hit. It's been languishing in development hell for the better part of a decade, going through different directors and a multitude of script revisions. Reportedly it was Spielberg, who directed the first two films and produced the last two, who was hard to satisfy, demanding script changes. You'd think then that the final result, with so many years to perfect, would be something really special. Instead, it just feels like generic summer popcorn fare. It's entertaining, but too often feels like just another paint-by-numbers blockbuster, offering few surprises. 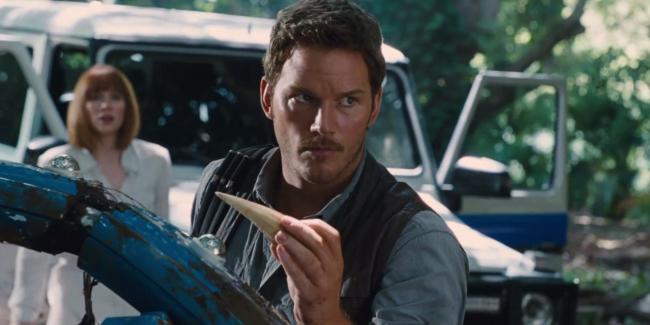 As Chris Pratt states in this film, Dinosaurs were/are living monsters. Although the Jurassic Park films are fantasy, they carry an interesting amount of historical fascination depicting the legendary giant animals. The interest in watching these films is the same motivation as the visitors who go to the prehistoric theme park in the movie. We want to be, or imagine being, as up close as it is possible to get to those fantastic creatures that once roamed the planet.

With Jurassic World, that point of interest has all but been erased. Other than the velociraptors, the dinosaurs all take a backseat to the Indominus Rex, a hybrid, spliced, cloned or whatever monstrosity. Supposedly, this Dino-Frankenstein is very intelligent but what does that mean compared to other dinosaurs that have long been reported to have tiny brains?

This big lizard, which has grown up in solitude is somehow smart enough to know that if she claws at the wall it will attract the humans to come into her cage. She also, amazingly enough, knows that she is being watched by thermal surveillance and if she masks her body temperature, they will not know she is still in her cage. Yeah, I get that this entire film is science fiction but the fantasy is ruined every time a WTF moment shows up. The most talked about one being when Bryce Dallas Howard outruns a T Rex. In the first film a moving vehicle barely stayed out of its jaw but this girl can do it on foot and in high heels no less.

There are plenty of outlandish moments but the action is so plentiful that if you can ignore the implausible bumps in the script’s road, you are in for an entertaining ride. Howard and Pratt are in one thrilling moment after another. Both actors do decent work but Pratt is only occasionally given a quip to show off his charm. “What kind of diet doesn't allow tequila?” When the camera is not on them it is often on two brothers who continuously seem to find themselves in the path of the Indominus Rex.

Speaking of the brothers, they are both played as completely forgettable characters. The high school age older brother broods about and stares at girls. The younger one runs around excited to see anything dinosaur related one minute and then busts into tears the next when, out of the blue, he decides to talk about their parents' impending divorce (a needless story line that is never again brought up). Seriously, are we going to care less for their safety if their parents are in a happy marriage?

As a fan of the first film I liked the references made to it. One employee wears a once popular “Jurassic Park” t-shirt. The most nostalgic moment happens when the characters seek shelter in an abandoned, jungle overrun, building that was the original visitor center heavily featured in the first movie.

Jurassic Park was like traveling back in time when the camera showed us those dinosaurs on the open field. You were impressed by their size and movement. Not only is there no such moment here but I disliked the whole idea that dinosaurs are now considered blasé. Granted, it is part of the point of the film. Howard explains, “Corporate felt genetic modification would up the 'wow' factor.” Pratt states, “They're dinosaurs. 'Wow' enough.” Only Pratt’s character seems to get it. He describes searching for the brothers to Howard as, “Don't worry. It's gonna be just like taking a walk in the woods... 65 million years ago.” That is the satisfaction I get from these films. If I wanted to just see a rampaging giant lizard I could watch any number of Godzilla movies. 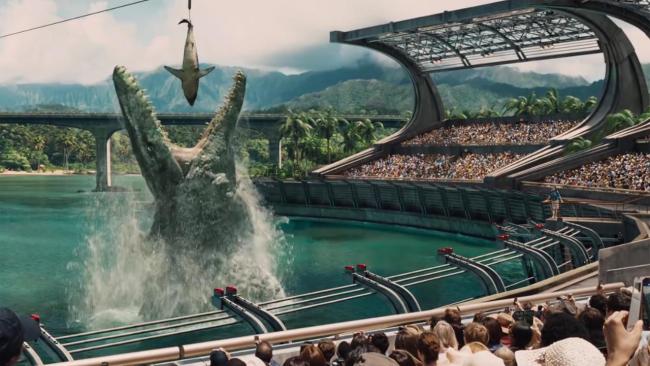 A Great White shark is dino-food in Jurassic World.

It's been more than twenty years since I last watched Jurassic Park and -until now- I'd never seen any of its sequels. Therefore my expectations were fairly low going in and I think that added to my enjoyment of this lightweight action-packed flick. Eric, the running-in-high-heels-from-the-T-Rex moment was intended to be humorous. It's not a practical demonstration in how to outrun a rampaging dinosaur. But I do agree with you that the genetically modified Indominus Rex is completely unnecessary and betrays the spirit of the original film.

Like Scott I appreciated the sense of fun on display here. The original movie had Jeff Goldblum making wisecracks but Chris Pratt raises the comedy to a whole new level. As he did so successfully in Guardians of the Galaxy he is able to generate a genuine feeling of danger while maintaining an underlying sense of humor. Or as the older brother says to his aunt, “Your boyfriend's a bad ass.” (Note the expression of pride on Bryce Dallas Howard's face when he says this).

Jurassic Park was groundbreaking in its use of CGI. In fact you could say that the modern Hollywood era began in 1993 with that movie. The following year Forrest Gump would become the first movie to feature major use of CGI to win the Best Picture Oscar, Titanic took it to another level in 1997 and by the time The Matrix came along in '99 most special effects in big budget Hollywood movies were being written in code.

Technology has come a long way since 1993 but computer generated images are still easy to spot. They will never encompass the gravity of living breathing creatures or carry the weight of tangible material things. And CGI characters move in an unrealistic manner that is always a dead give away. In short it still looks animated. In that sense Jurassic World lacks the impact of Jurassic Park. 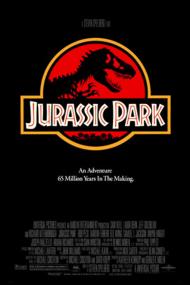