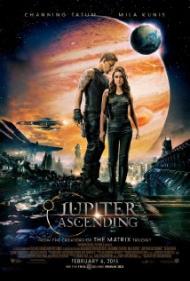 Directed by: Andy and Lana Wachowski 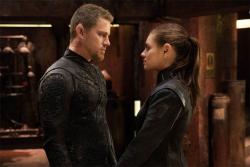 There's a moment in the middle of Jupiter Ascending where Mila Kunis's character must suffer through a string of bureaucratic nonsense for her identity and inheritance to be officially recognized. It's filmed as an homage to Terry Gilliam's Brazil and Gilliam himself has a cameo at the climax of this scene. It's an entertaining sequence, even though it feels out of place, and it demonstrates something about the Wachowskis. Like the director they so obviously admire, they have a strong visual sense and are able to create many memorable images. However, also like Gilliam, their ability to construct a story isn't as strong as their visual sense. The script they've written for this movie is needlessly complicated and filled with overly long scenes of exposition.

Mila Kunis stars as Jupiter Jones, the reincarnation of the matriarch of one of the galaxy's richest and most powerful families. When the film starts she doesn't realize this and is instead a maid living in Chicago who spends most of her time cleaning toilets. When the three children of her previous life discover her existence, they each plot to get ahold of her. It seems that her past self willed all of her possessions to her future self and those possessions include the planet Earth. Each of these siblings is thousands of years of old because the family business is immortality in the form of a serum derived from humans. They harvest entire planets, consuming the life essence of their inhabitants and distilling it into liquid form.

Channing Tatum plays Caine Wise, a half human/half wolf, former winged soldier turned bounty hunter, who is sent to track Jupiter down. He rescues her from hunters sent by the siblings and acts as her guide (and the audience's) to the universe. Caine rescues Jupiter over and over and over again as she is a fairly passive character, content to merely let events happen to her, only showing a bit of spark near the film's climax. Naturally the two of them fall in love, but since she's now a queen and he's a member of the lower caste, the road to true love is a rocky one.

There's lots of bickering and plotting amongst the siblings. Douglas Booth plays younger brother Titus like a playboy, while Tuppence Middleton plays sister Kalique. Eddie Redmayne plays the oldest sibling, Balem, but I should say that he "over" plays the oldest sibling. His performance is so over the top that it's a good thing Oscar voters didn't get a chance to see it before voting or they might not have given him the Oscar for his role in The Theory of Everything (I'm assuming he's going to win).

While the plot is silly, the visuals are as cutting edge as you would expect from the makers of The Matrix. I watched this movie in Imax 3-D and the battle scene over Chicago alone was worth the extra cost of admission. Caine uses anti-gravity boots that allow him to "skate" in mid-air. Using them and several other means of transportation, he does battle with a series of creatures and spaceships that takes him into the sky above the city and down into its traffic. Sure it's 95% CGI, but it's so well done that it's impossible to tell what's real and what isn't. The scene is choreographed with such skill and fluidity that it's truly breathtaking. Unfortunately, this scene happens within the first 45 minutes and no other scene in the movie ever comes close to matching it. Once the action moves to outer space the CGI becomes less impressive. Spaceships and aliens in space are one thing, but they're not as impressive as spaceships and aliens in the streets of Chicago. That isn't to say the later action scenes aren't well done, because they are. They just never top that first one.

The Wachowskis actually finished shooting this movie in 2013, but it's taken this long to complete the special effects. If only they'd taken such pains over the script. They have an amazing ability to choreograph action scenes in new and original ways. If only they would accept the fact that they're not nearly so good at writing them. This movie is filled with beautiful imagery, but those images sit on top of a story that runs the gamut from silly to boring to campy and back again. 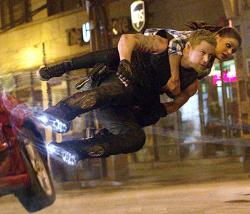 The Brazil moment in the middle of Jupiter Ascending is mildly amusing but, as Scott wrote, seems way out of place. This scene features books and paperwork as well as all kinds of odd devices. The setting in this film is one of a very advanced civilization yet this scene nearly contradicts all of it. Now, compared to the rest of the film it still stands out as one of the better moments.

Another entertaining scene is the fight in the sky over Chicago. Channing Tatum looks cool as hell on those hover skates. I watched this in 2D and still enjoyed that scene immensely. Again echoing Scott, the Wachowskis have an eye for movement and style but not a cohesive story. They wrote the script to this but were in desperate need of someone else to tell them to simplify things.

There is too much blathering on about the rivalry between siblings. They only needed one bad guy. All of Redmayne’s scenes are superfluous to the film except for the one at the end when he tries to force Jupiter to give him Earth. With a minor amount of rewriting his character Balem and his brother Titus could have been one and the same, eliminating all kinds of excessive plot points.

In fact, most of the early scenes should have been cut that do not feature Mila Kunis or Tatum. We eventually learn what is happening with the aliens so why spoonfeed us information at the beginning only to repeat it later when Jupiter learns it? The rest of the film is just as poorly edited and written anyway. When Redmayne forces Kunis to see him, why does she not agree on the condition that Tatum comes along with her? We know he is going to show up any way.

Jupiter is a working class girl who suddenly finds out that she has inherited a planet and is considered royalty in much of the universe. However, none of this seems to affect her in the least. She responds to finding out about her extraordinary legacy with all the excitement that one would getting a small raise at work. She sees and experiences very fantastical things but her surprise barely registers. She falls in love with Wise in a very small amount of time. Granted, a man risking his life to save a woman’s is no doubt an aphrodisiac but they barely talk and she knows little about him.

Once again agreeing with Scott’s review, the story is very weak while the visual effects are not only strong but the highlight of the film. Eye candy is just window dressing, intended to compliment a story, not be the only thing worth remembering about it.