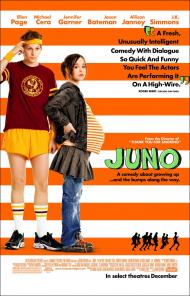 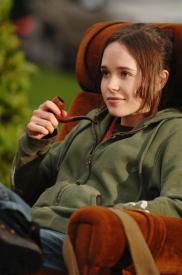 Ellen Page as Juno in Juno

Juno the movie and Juno the character as played by Ellen Page are both charming. It's not often that you'll see a feel-good movie about teen pregnancy, but Juno pulls it off to such a degree that it's instantly become my favorite movie of the year so far.

Juno, named after the Roman Goddess and not the city in Alaska, is a high-school girl with a cynical exterior and a sarcastic wit that she uses to hide her real emotions. After having sex with her best friend, (who she is in love with and he is in love with her, but neither of them wants to admit it first), she ends up pregnant. After first going to an abortion clinic and being unable to go through with it for a variety of humorous and sad reasons, she decides it would be best to give her baby up for adoption. She finds a nice upper-class couple; Vanessa (Garner) and Mark (Bateman), who are looking to adopt and arranges for them to take her baby when it is born. Unfortunately Vanessa and Mark aren't quite the perfect couple they first appear to be, as Mark is having severe doubts about wanting to be a father.

Like all the best comedies, this one finds humor in pathos. The script is funny, sad, heartwarming and real. Its characters are fully-developed human beings. Given that these days the script seems like an afterthought in most movies, this is a real treat.

And bringing the excellent script to life is a terrific cast. The only thing I'd seen Ellen Page in before this was X-Men: the Last Stand as Kitty Pryde, although she'd also done the independent film, Hard Candy. I definitely don't think this will be the last I hear of her though, as she carries this film with ease as the young girl, as she puts it, "dealing with things way beyond my maturity level".

The supporting cast is also great. Bateman and Garner in smaller roles are both good, and this is from someone who doesn't normally care for Garner. Allison Janney and J.K. Simmons bring some humor to the parts of Juno's Dad and step-mom. Michael Cera is perhaps the only weak link in the movie as the father of Juno's baby. He's pretty dull and perhaps plays the part a little too low-key. It's hard to see what Juno sees in him.

Unlike my brother Eric I rarely go into a movie looking for an agenda or propaganda. I'm sure he would look at this movie far differently from me, although you could hardly say this movie is promoting teen-pregnancy. It just happens to be about it. And it just happens to be one of the best movies of the year. 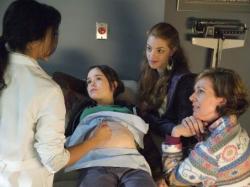 Juno ends up being as liberal as you can imagine.

Politically, Juno can be looked at from two different directions. From one angle this is a conservative, intelligent film that states quite simply that a single teenage girl is not ready to be a parent. The entire point of the movie is that one should not have children unless they are ready. Juno’s mother obviously was not as she abandoned her daughter. Juno and her boyfriend are not ready as they think more about their band than actually being parents. Bateman is not ready to be a father as he has yet to actually grow up. Politically this is very conservative thinking as so many liberals want to defend the rights of children having children no matter what.

However, the movie ends up being as liberal as you can imagine. When the technician at the hospital comments that she thinks it is a good idea that a single teen mother is giving her child up for adoption to a two parent home she is shot down with a tongue lashing about minding her own business. Any teen mother, short of Jamie Lynn Spears, is going to be on government assistance, and since our taxes pay for that assistance it is all tax payers business.

For a film about being a parent when your ready, it forgot to consider the one important factor, the child. In the words of Mitt Romney; “Every child deserves a mother and a father.” This movie ends on the cheery note that every child deserves a single parent and a day care? 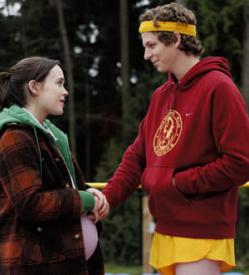 So Eric, did you like this movie or not? I’m assuming you did since you gave it three stars but I honestly can’t tell from your review. I agree with Scott that it has one of the best scripts of the year, combined with a great cast and a star-making performance by Page. The only thing I disagree with Scott about is the performance of Michael Cera. I thought he showed star quality and a certain nerdy charm in Superbad and though this role is much smaller, he tones it down just enough without sacrificing his appeal.

But it is really all about Juno. She is one of the best teen characters to come along in some time. She is clever and sarcastic but also impulsive and naïve. For all her cynical wise-cracks she is also wonderfully self-deprecating. The relationship between Juno and Paulie is the most convincing and realistically portrayed high school romance I can remember seeing in any movie. Very well done.

This might not be the best movie of the year but it is certainly the most likable.