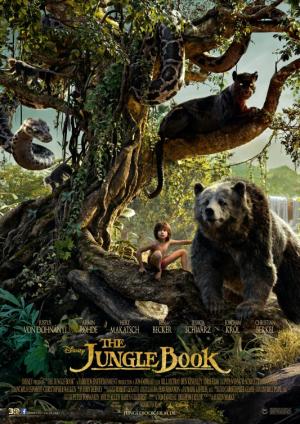 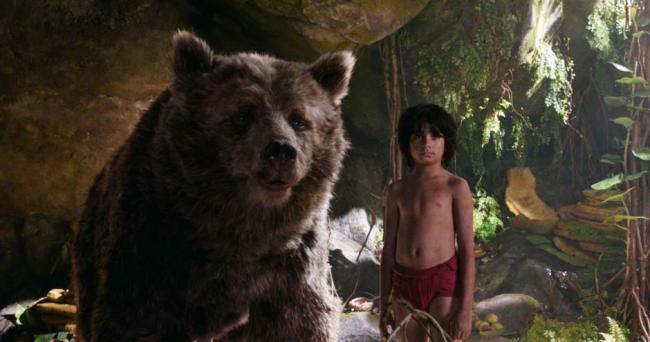 Baloo and Mowgli, played by Neel Sethi, in The Jungle Bopok

This new version of the Disney animated classic The Jungle Book is being touted as a live action film, but It can just barely be called that as the only live thing on the screen is Neel Sethi, who plays Mowgli. Although he has all animal co-stars he never filmed a single scene with any real animal. In fact, there were no animals even on set. The animal characters were performance puppets and later animated over or just animated all together. Even the locations in the film are computer-generated. The story takes place in India, but it was entirely filmed in Los Angeles.

I found those facts annoying because the movie wants to be one thing but is actually another. Now, let me be clear. The animation is pretty amazing. It is easy to get lost in the adventure of this movie as the look is so convincing even if it is obvious that Sethi never shared a single scene with another single living creature. Still, as my brother Patrick often notes, no matter how detailed, CGI lacks the soul of a real living breathing creature.

Mowgli is a boy raised by wolves in the Indian jungle after his father was killed by the tiger, Shere Khan, who years later still wants revenge on Mowgli as he wears the scars on his face from where Mowgli's father burnt him with the red flower (fire). Mowgli was found and given to the wolves to raise by the black panther, Bagheera, who now decides that Mowgli must return to the man village for his safety. They begin a journey and an adventure that puts Mowgli face to face with Shere Khan, Kaa, a large hungry snake, the friendly bear Baloo and King Louie, a gigantic orangutan, whose initial appearance on screen pays homage to Marlon Brando's first scene in Apocalypse Now (1979).

Mowgli has one adventure after another. Some scenes are a bit scary. Kaa comes awfully close to suffocating him in her coils. Louie chases Mowgli through his monkey place, tearing it apart and nearly killing Mowgli in the process. Then, of course, there is his final confrontation with the evil Shere Kahn. Not only does Mowgli face dangerous animals but Mowgli learns that he is likewise a dangerous creature. After Mowgli runs through the jungle with a burning torch, I half expected Baloo to turn to the camera and say, "Only you can prevent forest fires." It never gets preachy but a point is definitely being made.

Although the adventure is elevated and a moral about embracing your own abilities is taught, the amount of fun, so prevalent in the 1967 cartoon, often feels missing. Mowgli walked through that film fairly oblivious to the real danger he was in. Here he never forgets and rarely gets a break from someone trying to abduct, threaten or eat him. I looked forward to the famous songs in anticipation that they would lighten the mood.

With the exception of Scarlett Johansson, as Kaa, telling Mowgli to, "Trust in me," The only songs to make the final cut are "The Bare Necessities" and "I Wanna Be Like You". One of the biggest highlights of the 1967 film was the joyous version of, "The Bare Necessities."In Broadway terms, it was the showstopper. It was the forerunner of Hakuna Matata in The Lion KIng (1994). Here, Bill Murray and Sethi sing it without any of the pluck and half the celebration that made the song so catchy. The less said about Christopher Walken's slowed down, dramatic version of Louis Prima's "I Wanna Be Like You" the better.

The Jungle Book has plenty going on to capture your child's attention and moves along at a quick enough pace to hold it. If only Jon Favreau could have better worked the songs or maybe even left them out all together to avoid comparison. 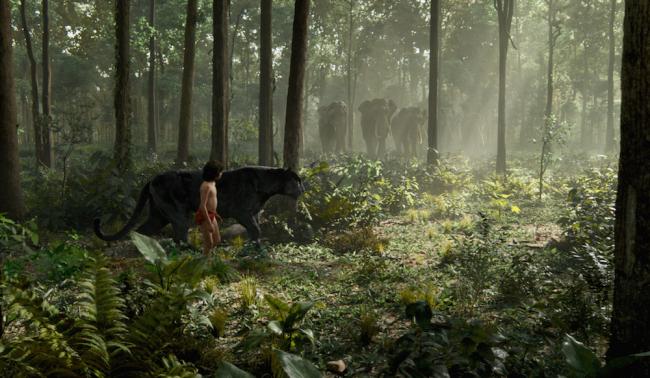 Neel Sethi in The Jungle Book.

As a huge lifelong fan of Rudyard Kipling's The Jungle Book and both the 1967 Disney cartoon and the 1942 Technicolor live-action version with Sabu as Mowgli, I was looking forward to this movie with some anticipation. I wondered if (and hoped) they would be able to capture the magic of these stories and not just the lush look of this CGI jungle. It didn't take long into the movie before I had my answer. And it's a resounding NO.

This Jungle Book has no sense of fun or wonder to it. The animals have very little personality and the depth of feeling conveyed on the pages of the book is nowhere to be found in this too-serious, uneven mess of a movie. Most of the characters and many of the adventures from the book are included here but they're changed in a way that doesn't improve them. As Eric wrote, Mowgli meets Kaa (a huge python), Baloo (a large bear) and King Louie (a giant ape) in a series of vignettes all the while being hunted by the evil tiger Shere Khan.

Baloo is the most changed of all the main characters. In the book he's a rather uptight pedant whose job is teaching the Law of the Jungle to the young wolf cubs. Here, like in the 1967 cartoon, he's a lazy drifter whom Mowgli encounters in the jungle. With Bill Murray voicing him he provides what little humor the film manages. Also missing from the book is the strong emotional attachment Mowgli has with his adopted wolf family. Lupita Nyong'o attempts to convey emotion as Raksha, Mowgli's wolf mother, but the stilted script never rises above being platitudinous.

Neel Sethi makes a decent enough Mowgli - even though his performance gets a little too self-conscious at times. Eric's right about the musical numbers. They are halfhearted at best and should have been cut altogether.

Although Jon Favreau failed to bring this Jungle Book to life I still have hopes for the upcoming live-action Warner Brothers' version starring Andy Serkis as Baloo, Christian Bale as Bagheera, Benedict Cumberbatch as Shere Khan, and Cate Blanchett as Kaa. Due in theaters in 2018. 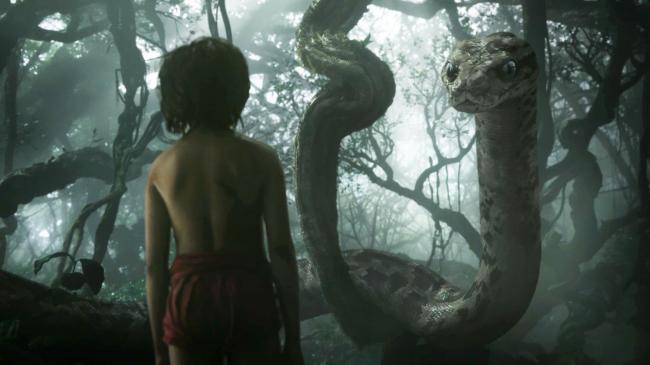 Like Patrick, I have been a fan of Kipling's Jungle Book stories since I was a child. I've never seen the 1942 film version and the last time I saw the Walt Disney animated version was so long ago that I have no real memory of it. One of the great things about the original stories is that I read and loved them when I was a child and I've read them multiple times since at varying ages of my life and enjoyed them every time. This movie version however, has little to offer for anyone over the age of 10.

I knew this movie was in trouble when it included the cutesy wolf cub. I suppose since this is Disney, I should have expected something of the sort, but this "Aww, isn't the wild wolf cub adorable." seems to me to best represent everything that's wrong with this movie. This jungle feels too safe, too clean and just too Disnified, even in its darkest moments. Mowgli's capture by Kaa (voiced excellently by Johannson) is the closest the film comes to feeling dangerous, but it's then followed by Bill Murray hamming it up as Baloo.

Every book to movie adaptation gets changed and so I expected some here, but the changes here seem random and none of them improve on the original story.   All of the drama and tension is gone. Mowgli's expulsion from the Jungle as he is betrayed and rejected by the wolf pack under the sway of Shere Khan is one of the book's most dramatic scenes, but here it's played too lightly and carries no weight.

The look of the jungle and the CGI of the animals are just about the only things the movie has going for it. Unlike Eric, I wasn't bothered by the CGI at all. This wouldn't have worked with real animals and I never felt as though I was watching a cartoon, even when the dialogue sounded as though it was written for one. Neel Sethi looks the part as Mowgli, but he never seemed tough enough to be a jungle boy raised by wolves.

The inclusion of the two songs is baffling. This isn't a musical, so why include them? Walken's song in particular is horrendous and ranks up there as one of the most uncomfortable moments I've seen in any movie. If they were going to make it musical, why not go all the way?

Although the cast Patrick mentioned in the other film adaptation in the works sounds intriguing, I can't work up any excitement for it. When I want to experience this story again, I'll return to Kipling's original. It's unlikely Hollywood will ever match it no matter who's providing the voices. 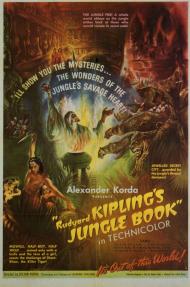 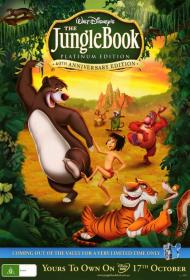