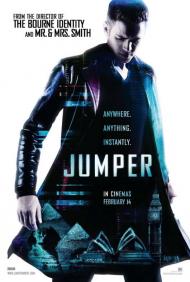 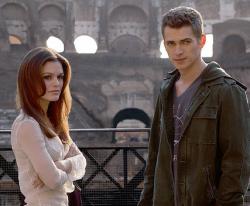 Jumper is all show and no substance. Jumper's trailer is full of special effects and action sequences. Many locations from around the world are shown. Hpwever, after watching the entire movie, you realize there is little plot or story arc.

The movie starts with David in high-school. He is a shy boy in love with a beautiful classmate. After getting picked on by the stereotypical bully, David learns he has the ability to teleport to anywhere he has already visited. He immediately runs away from home and starts robbing banks. He is supposed to be the good guy so the writers throw in the lame mention that David always leaves IOUs at every bank he loots. As if that somehow makes his crime alright.

A group of men, called paladins, show up and attack David. They are part of an ancient organization that hunts and kills jumpers for some ridiculous reason about God being the only one who should have such powers. David meets up with another jumper, Griffin. After discussing Marvel Team Up comic book, they decide to join forces.

What follows is a series of action sequences that take place all over the world, some for no apparent reason. One scene has David and Griffin in Tokyo stealing a car and racing around town for the fun of it. If the writers had spent more time on that thing called, um let me think now, oh Yeah, a plot, maybe they could have had more action scenes that actually had a purpose.

This movie could have been so much better had anything about it made sense. David's mother left him when he was 5, but considering that she is played by Diane Lane, you know she will pop up later in the movie. She does and the movie makes even less sense.

Just how and why are their jumpers? Why are a group of people trying to kill them all? Why does Millie have sex with David on the first day she reunites with him after not speaking for 8 years? Even my 14 year old wanted to know more about David's mom and the paladins. It is as if this movie can't wait to get to the next action sequence and in the process jettisons plot exposition.

Jumper looks good from a distance, and it could have been great if the plot had made any sense. If special effects and action is all you want in a movie then by all means enjoy Jumper. If you want details, look elsewhere. 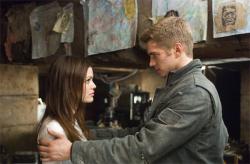 The way this was supposed to work Eric is that after having my expectations lowered by your review, I would see this movie and think, oh that wasn't so horrible after all. Instead I discovered that instead of over exaggerating this movie's faults, you were actually being nice.

This is one of those movies that could have been shortened considerably if anyone in it had ever heard of one of those modern inventions called a gun. If either side, it wouldn't have mattered which, just bought a pistol or a rifle or a machine gun they could have solved their problems pretty quickly. Several times in the movie the Paladins are able to shoot the Jumpers with wires that electrocute them. Well, hello! If you'd shot them with a gun instead, they'd be dead already. This would also have the added benefit to the audience of removing some truly horrible Bond-villain dialogue about how, "I'm going to kill you now, but first I'll blather on a bit until you have a chance to escape."

And of course, the Jumpers would make the world's perfect assassins, with or without the guns, but the guns would help. How's this for a way to take care of the Paladins? Step 1: teleport behind one of them and grab him. Step 2: teleport yourself and the Paladin over the ocean somewhere. Step 3: let go of the Paladin. Step 4: teleport yourself to safety. Step 5: Rinse and repeat. Problem solved. Or, shoot the fucker with a gun and then teleport the dead body somewhere.

I actually found the premise of the Jumpers and their power to be interesting, but it's obvious that the writers had no idea what to do with them. It's as if two stoned writers were sitting around smoking a joint and one turned to the other and said, "Dude, you know what would be like cool and stuff? If we could like teleport from this couch to the kitchen." And the other writer replied, "Hey, I bet we could like totally make a movie about that." "Yeah? What would it be about?" "I don't know man, but I bet it'd be awesome." "Yeah, let's write it." "Ok, but can we eat first? I'm starving."

If there is to be a sequel, as the ending implies, I have the solution to that too. Step 1: teleport behind the writers and grab them... 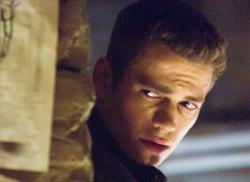