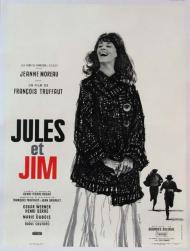 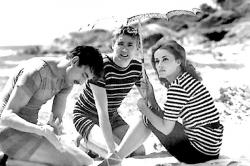 One of the classic movies of the French 'New Wave' period Jules and Jim is quirky, nostalgic and ultimately tragic. Directed and co-written by Francois Truffaut it tells the story of Jules (from Austria) and Jim (from France) who meet and become best friends in Paris shortly before World War I breaks out. They soon meet the beautiful and free spirited Catherine played by the radiant Jeanne Moreau and become an inseparable threesome. The coming war complicates things when the two friends must fight for opposing countries. The story continues through the war and about a dozen years after during which Jules and Catherine are married and have a child. One interesting aspect is the directors decision to not show his characters age physically even though twenty years passes during the course of the movie.

In 1961 when it was released Jules and Jim was banned even in France for its adult subject matter and today it remains far ahead of most American movies in terms of the complexity of the character relationships. And especially the uncompromisingly tragic ending.

Paris shortly after the turn of the 20th century is perfectly captured and really is like a fourth character in the story. Perhaps the most famous scene is where Catherine dresses as a man complete with penciled on mustache and the three 'boys' race across a bridge. This movie may not be for everyone but it is hauntingly evocative and original if a bit bizarre.

Henri Serre and Oskar Werner are Jim and Jules, two of the biggest pussies who ever walked the planet.

Jules and Jim shows the fragileness of some men when it comes to loving a woman. Jules and Jim are inseparable friends. They are intellectual and sexually experienced but neither knows the depths of love until they meet Catherine.

She is the definition of woman in all of her frustrating splendor. She entices the men with unpredictability and a playful whimsy. She draws them in and then pushes them away.  She plays games with them both, all the time excusing her thoughtless behavior. When she and Jim begin an affair in the home she shares with her husband Jules, she says to Jim of Jules, “We shall love him and respect him.” Does she even hear the words coming out of her own mouth?

I have met men in real life who have put up with their wives knowingly having affairs on them. I know men who have taken their wives back after such affairs. Love can make a man blind and completely stupid. Perhaps it is that some men are just too insecure to think they can have better. Either way, Jules and Jim are two very pathetic specimens. They each allow the same woman to treat them like emotional toys, taking them out occasionally to manipulate and then leaving them unattended when she finds another distraction.

Ultimately though, Catherine is cruel and likely insane. She is emotionally manipulative. She truly loves no one, including her own daughter. My biggest disappointment is that, although both men are complacent to Catherine’s games, neither man ever tells her off and both men certainly have plenty of reasons to. The closest either comes is when Jim tells her, “You wanted to invent love.” I agree with him, Catherine has no clue what love is or the unwritten rules it entails.