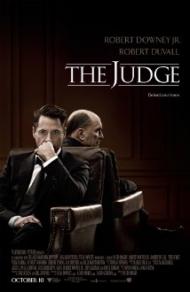 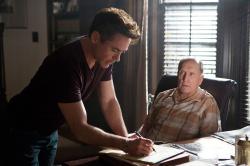 The Judge is the first film to be produced by Robert Downey Jr. and his wife as part of their "Team Downey" production company. For this their first film they have chosen an acting showcase for Downey as the star and for Robert Duvall who co-stars. Their performances are the highlight in what is otherwise an overly long, fairly cliched story.

Downey plays Hank Palmer, an unscrupulous lawyer living in Chicago who makes a nice living off of defending the guilty. He returns to his small hometown in rural Indiana upon the death of his mother. While he's home, his father, Judge Palmer (Duvall), is arrested for killing a former defendant in his court in a hit and run. Hank and his father have been estranged for many years and it's only after a bit of emotional conflict that the Judge agrees to let Hank defend him.

Hank's return to his hometown hits all of the cliches. He runs into people he used to know as a child. And of course there's the old girlfriend who never left town and who is available for some reunion romancing. We've seen this many times before, including the similar themed--albeit lighter in tone--This is Where I Leave You just a couple of months ago. There have been many other similarly themed films. Garden State and Grosse Pointe Blank, are just a couple that come to mind, but I suppose you could trace this plot all the way back to the biblical story of the prodigal son. Unfortunately, the script does little to freshen the tale and also stretches it further than is needed.

It is the pairing of Downey and Duvall that makes the film worth watching. The gruff and morally upright Judge disapproves of his son's lifestyle. He views many of Hank's defense tricks as unscrupulous and the two clash often. They also still have several emotional issues from their past that bubble below the surface and boil over on occasion. The emotional resolution of their relationship is more interesting than the actual resolution of the court case. Duvall's performance has been generating some award's buzz and he is good in the part but if he is nominated for an Oscar, it will be because of not just this film, but all of his previous body of work as well.

While the stars both get an opportunity to shine, the supporting cast isn't given much to do. It's filled with recognizable faces, including the likes of Vera Farmiga, Vincent D'Onofrio, Billy Bob Thornton, Leighton Meester, and Dax Shepard. However, their personalities are all one note and are merely there to service Downey and Duvall.

Although the film is set in Indiana, only a couple of establishing shots were filmed there. The rest was shot in Massachusetts and the transition is fairly obvious. One minute Hank is driving through the flat cornfields of the Midwest before suddenly arriving in a very hilly and wooded New England small town. It seems strange that they bothered to keep the story set in Indiana at all if they weren't going to shoot there, or even try to fake it better. A small town in the Northeast would have worked just as well. 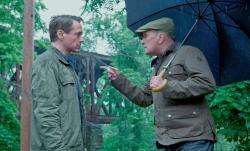 At the risk of being dull I have to agree with Scott (and just about every other critic to pass sentence on The Judge). Despite being a fine showcase for its two male leads, this movie is awash in cliches. Its plot is strictly by the numbers, almost as if the script writers were checking them off as they went along. Estranged son returns to his small hometown from the big city after years away. Check. Residents of said small town are portrayed as unsophisticated rubes. Check. The main character has unresolved emotional issues with his father. Check. Secrets from their past are revealed. Check. There's an ex-girlfriend who... blah, blah, blah. Check. Father and son bond by the end of the picture. Check.

It's no surprise that Robert Downey Jr. produced this movie. Instead of The Judge, it would more accurately be called The Lawyer, since his character completely dominates it and is in nearly every scene. Other than Robert Duvall none of the other actors are given much of a chance to shine. All of their scenes are with Downey and revolve around their character's relationship to his.

Given the cliched nature of the story, it's quite a testament to Downey and Duvall that the ending carries as much emotional weight as it does. In spite of the fact that I knew exactly where everything was heading, I found my eyes glistening with tears at the end. Proof that great actors can sometimes create empathy for their characters even if the screenplay doesn't earn it. Duvall is particularly affecting as an old man facing the end. His Oscar nomination is well deserved even if, as Scott wrote, it's equal parts his performance here and a tribute to his long and illustrious past career.

I wish the film had delved a bit deeper into the entire Palmer family. The brothers, played by Vincent D'Onofrio and Jeremy Strong, are treated more like props than human beings. But now that I think about it that's pretty much true for all of the secondary characters in the movie. Their only purpose is their relationship to Hank.

To be honest I enjoyed The Judge more than it sounds like I did. With the caveat that I enjoyed it in the same way that you enjoy a Hallmark movie of the week – albeit a very well acted Hallmark movie of the week. The script is trite and predictable but it's orchestrated to hit all the right emotional notes. So sit back and let The Judge pluck your heartstrings like a fiddle. 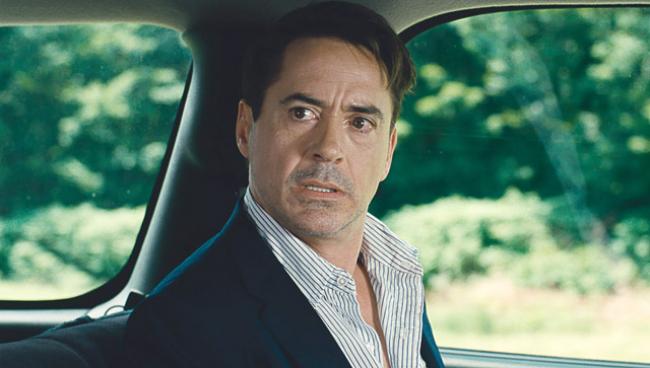 Robert Downey Jr. in The Judge

The Indiana locale bothered me as well. The Indiana state line is something like a half hour on the highway from Chicago. It likely takes that long to get to O’Hare airport. The time it took Hank to wait to board, take off, fly to wherever, wait in line to rent a car and then drive through the Indiana countryside to his small home town, he could have just driven there from Chicago in the first place.

Yeah, as my brothers mentioned, the clichés are all here and they are too much. The heart of the story is a father and son reconnecting but that was apparently not enough. Hank is in the midst of breaking up with his wife who had an affair. He meets an old flame whom he may have unknowingly had a child with. Then there are his brothers who have problems but, as Patrick wrote, are little more than background.

Everyone in the film seems to be living with regret, a secret past or both. Hank even points out to a policeman that he knows he had a gay experience in high school. The officer, a very minor character, clarifies nervously that it was just a rumor.

Everyone in this film has issues and the family at the center of it, thrives on them. As Hank describes it, “This family's a fucking Picasso painting.” The best moments are when Robert Downey Jr. is playing things light. When Dax Shepard asks, “Now, what exactly is our target juror?” Robert Duvall answers, “Intelligent people who will listen to instructions and follow the evidence.” Downey Jr. jumps in with a different answer, “Those I can persuade to swallow their own tongue. Anyone who's seen a Sasquatch, moon-landing deniers, those are our people.”

My single favorite line in The Judge is when Downey Jr. asks Duvall if he believes in God and Duvall responds, “I'm seventy two with stage four cancer. What choice do I have?” There are a few good moments here and some of the scenes between Duvall and Downey Jr. generate some sincere emotion but at two hours and twenty minutes it long over stays its welcome.