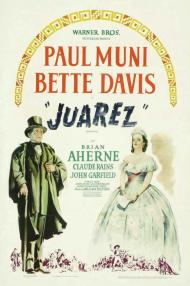 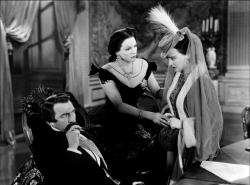 Ordinarily I don't think that old black and white movies would automatically have been better if shot in color. The 1939 historical biopic Juarez is one exception, however. When Technicolor began to gain in popularity in the late thirties and early forties, it was the adventure and musical genres that led the way. Can anyone honestly argue that Technicolor didn't add to the popularity and huge legacy that Gone with the Wind and The Wizard of Oz have enjoyed over the years? Juarez was made the same year as both of these movies and, had Warner Bros. spent the extra money necessary to have filmed it in color, I think it would have found a home on television in later decades as those other two perennial favorites did. It does, after all, have a great story, told on an epic scale, with memorable and heroic characters.

This is the story of Mexico's struggle for independence from France's Napoleon III (played with flair by Claude Rains). The famous dictator sends Maximilian, a liberal-minded Austrian nobleman (Oscar nominated Brian Aherne) and his wife Carlotta (Bette Davis) to be his puppet-emperor over the Mexican people in an effort to stop the spread of Democracy through the leadership of the noble Benito Juarez (Paul Muni). There are many parallels between the Mexican revolutionary and his American counterpart Abraham Lincoln. According to the movie they were friends and had immense respect for each other.

John Garfield (in one of his early roles) appears as Mexican General Diaz. Reliable character actors Donald Crisp, Gale Sondergaard and Harry Davenport round out the cast. Bette Davis makes good use of her famous eyes in the role of Carlotta, slowly sinking into madness. She only lets loose in one scene when she screams repeatedly at Napoleon, "Answer me, Sire!" Paul Muni underplays the title character to good effect; his Benito Juarez personifies the word dignity. The relatively unknown Brian Aherne gets the most screen time as the doomed yet honest Maximilian.

This movie may seem pretentious and corny to modern moviegoers, but it is all done with such utter seriousness, and with what was then a lavish budget, that with only a little effort on the viewer's part, it works.  It's just too bad they didn't use Technicolor.