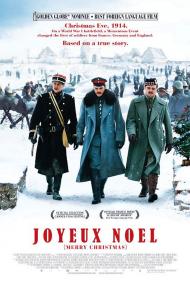 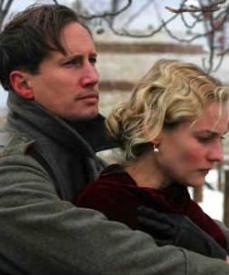 Joyeux Noel (Merry Christmas) tells the true inspiring story of three armies, Scottish, French and German who fought in the trenches during World War I. On the Scottish side is a priest who accompanied two brothers from his parish. On the French side is an officer with a domineering father and a wife he has not seen in awhile. On the German side is a famous Opera singer, Nikolaus.

After some back story, the movie hits its moment on December 24, 1914. The three armies find themselves in a lull from the fighting. The opera singer's girlfriend, Anna, visits him on the front line. To entertain the German troops he sings Stille Nacht. To his surprise, applause erupts from the Scottish and French trenches when he finishes. The Scottish break out the bagpipes and they play Adeste Fideles. The singer grabs a small Christmas tree, aglow with candles and shocks everyone by walking into no-mans-land singing along to the music. It is a truly powerful moment.

The three commanding officers meet and decide on a temporary truce for Christmas. The three armies exchange chocolate and liquor as gifts. They talk of their wives. The German officer gives the French officer back his wallet that he lost in the last offensive. The priest holds mass. "Tonight, these men were drawn to that altar like it was a fire in the middle of winter. Even those who aren't devout came to warm themselves." Anna sings Ave Maria.

The next morning they bury the dead and play soccer. A German soldier and a French soldier have a friendly argument over a cat's name. It has been adopted by both armies, as it wandered back and forth between the trenches. Most of the men are surprised, yet comforted, to discover that their enemy is in fact merely a reflection of themselves.

The three armies' truce causes a stir within their countries' bureaucracy, and all get reprimanded to some degree. It demonstrates that governments decide on war, yet it is the citizens who suffer for it. Joyeux Noel is a true testament to the glory of the human spirit. Even when the world is at its ugliest, man still has the capacity for compassion. 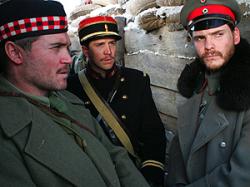 A Scot, French and German soldier bond on Christmas Eve.

This is a heartwarming movie that makes a powerful statement about war and the men - sent by other men - who do the actual fighting or, as in this case, the peacemaking. The acting and the script are both quite good. I only wish more time had been spent showing the events of this fateful and rather miraculous Christmas Eve and Christmas Day. There is a bit too much build up and too much time spent showing the aftermath. The actual holiday scenes feel a bit rushed.

The different characters are all interesting although we don’t get to know much about them, beyond a few basic personality traits. As this is a war movie not all of the characters will live beyond this Christmas season. There are two deaths that are particularly tragic.

This movie will leave you feeling frustrated at mankind. These men were able to connect with the common humanity they shared with their enemies. The fact that their spontaneous international camaraderie brought such swift retribution from the powers that be shows just how potentially earthshaking, and therefore threatening to their countries' leaders, these actions were. 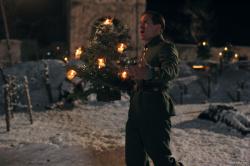 Given the unique horrors of living day after day in a filthy, louse ridden, flooded trench under constant bombardment and the threat of death, perhaps it's not surprising that the two sides on the Western Front in World War I were able to share a moment together. As one of the characters in this film says, the soldiers at the front, no matter their nationality, have more in common with each other than they do with their own countrymen on the home front who will never fully understand what they were going through. Still, even given that, the Christmas truce of 1914 is the kind of event that if it weren't true, would be scoffed at as implausible if a screenwriter included it in a film.

In actual fact, the truce wasn't as unique as this film leads you to believe. There were isolated truces up and down the lines for the first couple of years of the war. Some involving complicit fraternization while others were limited to a single hour each day to allow both sides to retrieve their dead and wounded. In some locations the trenches were so close to each other that soldiers on both sides would shout the news back and forth to each other including, most importantly, the English football scores. The Christmas truce was the most famous of all the truces however, mainly because it was the most widespread, plus the idea that it happened on Christmas makes it seem that much more poetic. The truces ended following condemnation by the leaders on both sides and also by the bloody battles of Verdun, the Somme and the use of chemical warfare that left soldiers on both sides feeling much less comradely with the enemy.

I agree with Patrick that while the scenes of the truce itself are powerful and entertaining, they are too rushed compared to the rest of the film. It takes too long to reach the truce and the Christmas eve and day are sped through. Part of the problem with the build-up is that it tries to include too many different characters and we don't get to know any of them well enough. I wish it had picked two characters, one British and one German and told the story entirely from their points of view. The young officers seem like the perfect candidates to have the starring roles. Diane Kruger, while a beautiful and talented actress, isn't needed. Was she simply included so there would be a female character? The multiple characters allow us to see many different vignettes, but none of the characters ever feel truly fleshed out or completely three-dimensional.

I mentioned what a poetic moment that truce on Christmas day was, but there's not much poetic about this movie. In fact, it's rather mundane. The story of the Christmas truce is such a powerful image that any story about it is going to generate some emotion and it's that moment rather than this movie that is moving. The performances and the script are adequate, without being anything special. The situation and the humanity of the men who put aside war for even a short time in a moment of shared brotherhood was beautiful and admirable and is rightfully being commemorated 100 years later. This movie, while enjoyable enough, is unlikely to be remembered on its own in such a time. 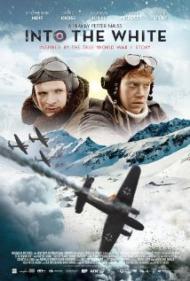