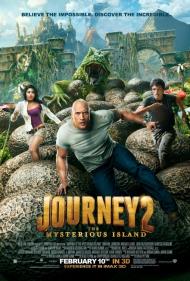 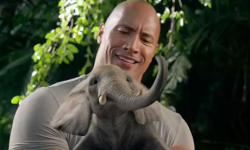 I didn't see 2008's Journey to the Center of the Earth but considering the cast changes and the simplicity of the plot, I don't exactly think I missed out because of it. Gone is Brendan Fraser and Jane Wheeler as Sean's parents and instead Dwayne the Rock Johnson is now playing his step-father while his mother has been re-cast with Kristin Davis now playing the small, generic and thankless part of his mother.

When Sean, now in high school, receives a mysterious signal from his grandfather, he and Hank (Johnson) head off to Palau, near where they've determined the signal is coming from. Sean is convinced that the signal will lead them to Jules Verne's mysterious island. Hank just hopes to bond with his step-son. They hire Gabato (Guzman) and his daughter Kailani (Hudgens) to fly them to the coordinates in their tour helicopter. When the helicopter crashes the four of them find out that Sean was right and they are in fact on the Mysterious Island of legend and Sean's grandfather, played by a mischievous and under-used Michael Caine, is living there.

The plot is very lightweight and seems to be aimed at young children. The island is brightly colored and filled with dangers that don't generate any serious tension. You never feel that anyone is in any danger despite a giant lizard and an erupting volcano. Guzman is there to provide comic relief but he's so bumbling and immature that only the under five year olds will find much to laugh at.

Once they arrive on the island they learn that it is sinking and so they spend the rest of the movie trying to get off of it. This brings up the movies biggest plot hole. The island turns out to be Atlantis (although how it got into the middle of the South Pacific is never explained) and apparently it rises above the ocean and then sinks below it on a 140 year cycle. Somehow though, the exotic animals and vegetation keep coming back every time it rises back up above water.

It is only the likability of Johnson and Caine that make the movie watchable at all, at least by grown-ups. Caine is a scene stealer and I wish he was in it more. The back and forth between the two of them provides the funniest moments. Although I seriously question the decision to have Johnson sing a version of Louis Armstrong's "Wonderful World" while accompanying himself on the ukulele.

I actually paid the extra amount to see this movie in 3-D hoping that at least I would get some eye candy out of it, but I needn't have bothered. Apart from having some cherries bounce off of Johnson's pecs, the third dimension adds nothing to the second.

The ending hints at another sequel, possibly in space this time. I know that I for one won't be lining up to see it. 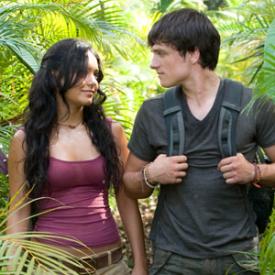 Vanessa Hudgens and Josh Hutcherson in Journey 2: The Mysterious Island

Journey 2: The Mysterious Island may as well have been called Journey to CGI Island.  Other than a couple of sets and a few scenes filmed outside in Hawaii, most of this movie is animated.   The helicopter, the Nautilus, the creatures, the storm and most of the Island was all created on a computer screen.   And that includes those peck popping cherries as well.  CGI has its place in movies, but it eliminates the sense of discovery and adventure.  None of the CGI is at all convincing.

Scott mentioned the flaw in the history of the Islands 140 year cycle and how the exotic animals and vegetation keep coming back every time it rises back up above water.  Another flaw is that when the island sinks, it does so by breaking apart.  How have those thousand year old buildings survived every destructive sinking and rising?  None of this makes sense, but the entire film has ridiculous plot holes so it hardly makes a difference.

The biggest WTF scene for me was when Johnson and Hutcherson dive off the cliff, swim very deep into the ocean, find the Nautilus, open it's hatch and enter the submarine without flooding it in any way.  With a quick glance at the controls, they know exactly how to charge the batteries, start it up and drive it.  How they then collect their other three companions is likewise illogical.

As Scott also wrote, this is intended for children who will likely not question the ridiculousness of it all.  For adults however, this is as intellectual as an episode of "SpongeBob SquarePants."  The one and only scene I found amusing was when Hutcherson and Hudgens are about to share a "G" rated romantic scene and Johnson whispers to Hutcherson to, "Pop your pecs."

Scott liked and wanted more between Johnson and Cain.  I however, thought the film could have worked if it had been able to create more of a storyline between Johnson and Hutcherson.  The films story arc is supposed to be them bonding during an adventure, but it generates zero emotion.  It almost suggests a moment when Hutcherson tells Johnson to, "Come back."  as people in his life do not always do that.  That should have preceded a scene where Johnson almost does not.  It could have created a real moment with some genuine emotion.

Journey 2: The Mysterious Island is content to merely settle for lots and lots of CGI animation.  If as much effort was put into the writing as the especial effects, this could have been a decent film.  As it is, it is almost as unwatchable as it is pointless. 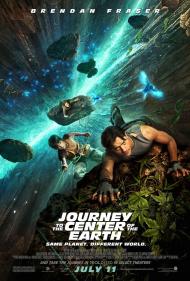