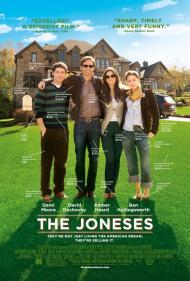 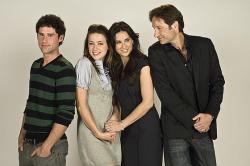 The Joneses (as in "Keeping up with...") never really works on any level.  It wants to make a statement about our culture of mass consumption, but its message is muddled and aimed at the wrong target.  It also wants to be funny, but it never elicits more than a chuckle.  For this movie to work it should really have gone surreal and out there or took a stance and stood by it, but it never does.

Duchovny and Moore play Steve and Kate Jones, a seemingly rich, happy, good looking and all around perfect couple who are the parents of Jenn and Mick Jones, the seemingly perfect teenage son and daughter.  I say seemingly (and if you saw the previews, you already know this) because in reality they're not a family at all, but marketers who pose as a family, move into an affluent neighborhood and try to start fashion and shopping trends in the area by becoming popular and showing off all their possessions so that soon everyone will want to be like them.  Things don't go that smoothly though when the "daughter", who isn't really a teenager, starts having an affair with a much older man.  The son, who's supposed to be a ladies man, turns out to be gay and makes a pass at his "girlfriend's" brother.  Things get further complicated when Steve starts to really fall for Kate.

The message of the movie is definitely muddled.  It shows through the neighbor, played by Gary Cole, what the cost of trying to keep up with the Joneses can be, but who's it blaming?  Is it blaming the neighbor who foolishly tries to live beyond his means?  Or is it trying to misplace the blame onto society as represented by the Joneses?  Or is it just reporting things and letting the audience sort it out?  Whatever the case, it's not saying anything original or meaningful.

I found it ironic that a movie that seemed to condemning consumerism features several instances of blatant product placement.  Dell computer and Audi both feature heavily in the film.  Is it this commercialism that holds the script back since they can't anger the people putting up the money for it?

At least the cast is good. Moore and Duchovny are believable in their parts, even if you never really learn that much about them. Likewise Heard and Hollingsworth do a decent enough job as the daughter and son.  They're just not given enough to work with.

With the recent recession and consumer spending dropping and a backlash against commercialism happening, you'd think this movie could find plenty to say, but instead it plays it very safe and rather dull.

I would buy what their selling.

The message of the movie is not at all muddled.  It is definitely condemning consumerism and our free market as represented by  the Joneses.  This is exemplified by Steve's speech at the end when he announces that he has lied to everyone.  He reveals it as if it means anything.   We are surrounded by ads, commercials, televisions and movies that try to sell us lies to separate us from our paycheck.  What the Joneses do in this movie is nothing that has not been going on for years, other than they are organized as a business in the film.

The Joneses are not bad people, or at all evil, but the movie treats them as criminals.  Look how they scurry away like rats exposed to the sun, as Steve spills the beans on their actual "family" dynamics.  It is not a crime to move into a neighborhood and flaunt your possessions, or lie about the relationship of the person living with you.  Their one crime may be that the "son" and "daughter" are actually adults pretending to be high schoolers.

Speaking of the "son" and "daughter',  they are horribly unprofessional business salesmen.  Jenn jumps into bed with Steve and a middle aged neighbor.  Mick tries to kiss a guy who has made no indication that he would reciprocate.   Who hired them?  Kate comes across as a hard ass, goal oriented professional, but then gets all motherly when the trampy Jenn gets dumped by her married lover.

This movie starts out all about business and capitalism but then dissolves into a liberal message about how feelings and emotions are more important than making money.   This could have worked if the family in question was a real family that had gotten side tracked by their own greed, and needed to be reminded of some simple family values.

As it is I never bought any of the characters.   Steve was a stud who falls in love with Kate out of what, convenience?  Kate is focused on her career until Steve kisses her passionately?  Really?  Jenn was hired to pose as a high schooler to sell other girls products but she puts her efforts into an affair outside of school.  Mick has no personality other than he is gay.

The Joneses states the obvious, that we all want a better life and some of us are willing to go into debt for it.   It proceeds to treat the purveyors of merchandise as villains who meet in dark windowed limosines and behind closed doors. They treat them as if they are forcing people to buy things.  Forcing someone to purchase a particular item is criminal in the likes of mobsters shaking down a business for protection money.  No one can force you to buy anything, except our government, with such things as healthcare and LED light bulbs.