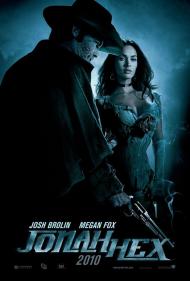 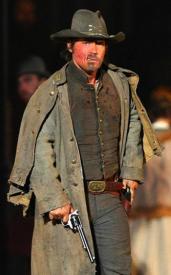 Based on the old DC comic, Jonah Hex tells the story of a bounty hunter, famous for his scarred face.  He was a former confederate officer, whose wife and son were killed in front of him by another former officer.  He was saved by some mystical Indian hocus pocus and gained the ability to talk to the dead.

He wanders around earning money collecting ransom on bad guys he kills.  He occasionally visits the hottest whore around, Megan Fox.  Once he discovers that the man who killed his family is up to no good, he sets out to kill him.

Written by the guys that wrote the overwrought Crank: High Voltage and Gamer, Jonah Hex almost gets lost in his own story.  There are too many flashbacks and an odd scene of him hallucinating about a fight with the bad guy.  Just how much crack has Mark Neveldine and Brian Taylor smoked?  This is a western.  It does not need any convoluted plot devices.

Although Scott dislikes when I compare movies to reality, I have to mention the politics in this film.  Hex's nemesis is building a weapon of mass destruction.  He is informed that the government learned of this because of modern intelligence gathering.

A black character sells Hex some guns, during which he tells Hex that he knows that even though Hex fought for the confederacy, he knows Hex did not want the south to secede, or slavery to exist.  Later he is shown with his sons watching the President give a speech.  It has nothing to do with the plot. It bothers me because it is an obvious politically correct plant.

This movie took place in 1876 yet it has modern sensibilities?  That is hardly the worst of the plot though.  The weapon of mass destruction is a cannon that can destroy an entire town with glowing orange balls.

I have not seen a good western in so long that I hoped this would be one.  With the success of the video game Red Dead Redemption, it is clear that there is some interest in the genre.  The writers however, did not have any faith in it and turned it into a science fiction film with a 2010  political commentary.  It opens with Hex giving a narration about war.

Although the writing falls short, the cast is good.  Brolin has the right look to play a cowboy, while Fox is certainly attractive in western prostitute garb.   Malkovich plays the bad guy with his usual panache.  If only the script could have helped them out. 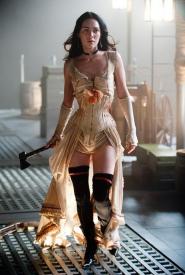 Modern sensibilities, I agree with, but political commentary?  There's no political commentary here. Yes, you can say that a terrorist with weapons of mass destruction is a modern idea, but they make no comment on it.  If they wanted to do that, it would have turned out that the villain never had weapons of mass destruction at all and the intelligence gathering was faulty.

I remember reading a few Jonah Hex comics when I was a kid and although my memories of them are vague, I certainly didn't remember it quite like this movie.  A quick glance around the Internet reveals just how much the script writers changed.

In the comics, Hex never had the ability to speak to the dead.  In fact, he had no super powers of any kind.  Also in the comic, his face was disfigured by an Indian and not an army officer, but maybe to show an Indian (sorry, Native American) do the mutilating would be considered politically incorrect.  Of course, the biggest difference in the comic is that they were westerns and not this bastardized science fiction.

I do agree about the cast.  Brolin is far too good for this material.  He's clearly slumming it for a paycheck.  He could definitely make a good cowboy with the right script.  I still think Fox is a horrible actress, but she does look good.  Malkovich is likewise wasted.  His villain is bland and boring.  He should have been much more evil and over the top.  Nobody hams it up like Malkovich, but he's never given the chance.

There are also several extraneous scenes that seem to be thrown in just to pad the running time.  Fox is given a few extra scenes that show her dealing with an unruly client, but have nothing to do with the plot.  There's a fight scene with some sort of weird snake guy that you just assume is going to end with Hex fighting him, but it never happens and you're just left wondering, what the fuck was that about?

The movie does have a certain visual style about it.  Certain scenes are filmed with flair, but the eye candy doesn't do anything to make up for the nonsensical plot.  I mean, what the hell is inside those glowing balls anyway?  And like you Eric, I kept wondering why they bothered to keep cutting back to that dream sequence fight when the real fight was going on at the same time.  Do we need to see it twice, only in two different settings?

I also never felt any real empathy or liking for any of the characters.  None of them have any depth and I can't say I was ever really rooting all that strongly for Hex to beat the bad guy.  I just didn't care.

You are completely right about the script Eric.  Every good movie needs to start with a well written one.  If the story and dialogue are horrible than it doesn't matter how good it looks or who's starring in it.  That is very much the case here. 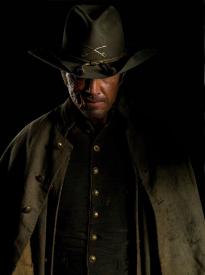 The nighttime cinematography is eyeball straining.

Wow, I have rarely seen a big budget Hollywood movie this bad. The script is god-awful; the editing confusing, the nighttime cinematography will strain your eyeballs and Megan Fox has to be the worst actress making movies today.

I agree about the modern sensibilities as well. The weapon of mass destruction angle is patently ridiculous in 1876. I even agree with you Eric about the writers going out of their way to show Jonah as a “good” Confederate soldier in the scene with Lance Reddick as the gun seller.

Watching this mercifully short movie (the end credits start at the 73 minute mark) I could only feel pity for Josh Brolin. His performance is so far above the material that it seems like he is in a different movie altogether. I’ll bet now he wishes that had been the case.

With its raucous soundtrack and science fiction elements Jonah Hex has been called a Techno-Western. Giving it a semi-clever label doesn’t change the fact that this movie sucks.