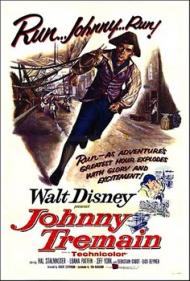 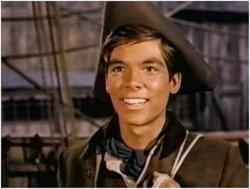 Movies don’t get much more patriotic than this Walt Disney production about a young Bostonian silversmith apprentice who gets caught up in the beginnings of the American Revolution. Based on the book by Esther Forbes, and introducing Hal Stalmaster as Johnny Tremain, this Technicolor movie is a soul stirring, if not completely historically accurate, account of the Boston Tea Party, as well as Paul Revere’s legendary midnight ride between Lexington and Concord on that fateful night in April of 1775, and the shot heard round the world that began the hostilities.

Virtually everything about this movie is designed to swell patriotism in the heart of every proud American. Johnny Tremain, the person, represents all that is noble and honorable in our countrymen. Sure this is an idealized version of these historical events but this is a movie from the Walt Disney studios made in the 1950’s after all. You could hardly expect anything different.

I remember watching it in elementary school when studying the American Revolution. It may get a few small details wrong (for example the Boston Tea Party took place in December but in this movie when lanterns are hung on the Liberty Tree that night it clearly has leaves on it) but it gets the essentials correct. All school children are familiar with (or should be) such lines as “One if by land, two if by sea.” And “The redcoats are coming!” (OK so Paul Revere actually shouted “The regulars are coming.” “redcoats” sounds better).

The story moves along quickly and Stalmaster is quite good as the title character. He brings a charismatic innocence and sense of integrity to the role. Anyone with an ounce of national pride will find themselves moved when the Patriot Commander at Lexington says, "We'll stand by our orders, but if they mean to have a war, let it begin here." And you will most certainly join in the singing of “Oh we are the sons, yes we are the sons, the sons of Liberty!”

Johnny Tremain (along with Yankee Doodle Dandy) makes the perfect movie to watch next Independence Day. 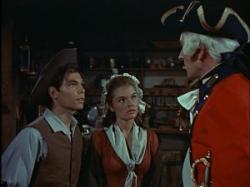 Like you Patrick, I remember watching this movie when in school.  I remembered enjoying it then, but it failed to live up to my memory on this recent watching.  Based on a children's book, the movie makes no attempts to change that target audience.  It keeps everything very simple and eventually rather dull.  It's a good, if sanitized, introduction to the events surrounding the start of the American Revolution, even if, as you say Patrick, it's not exactly 100% accurate.

The thing that struck me the most while watching it this time is how much John Jakes stole from this movie for his Kent Family Chronicles series of novels.  The character of Phillip Kent is virtually a carbon copy of Johnny Tremain.  They're both apprentices who are the bastard children of a nobleman, although Tremain's lineage is only hinted at.  They both gain access to the leaders of the Revolution and both become Son's of Liberty, taking part in many of the same historical events.  Given those and other similarities, if Esther Forbes had still been alive when that series was published I don't see how she couldn't have won a plagiarism suit against him.

One of the movie's problems is that while all of the Boston revolutionaries are featured, they're all so dull and similar as to be interchangeable.  None of them have any distinguishing characteristics.  In real life Sam Adams was a firebrand who loved to stir up trouble and was an embarrassment to his richer and classier second cousin, John Adams.  Dr. Warren was reported to be young, handsome and something of a lady's man.  Paul Revere was not just a silversmith, but an engraver and a dentist with a large family (11 children with 2 wives (consecutively, not concurrently) who was always looking to make some extra money to pay for his growing brood.  The founding father's were a wide array of characters who were human and interesting, not the dull platitude spouting saints who are featured here.

I was unimpressed with Hal Stalmaster in the lead role.  Not that any of the acting is particularly good, but he seems stiff and sounds like he's reciting his lines rather than speaking them naturally.  Was he plucked from some community theater somewhere?  The only member of the cast who stood out to me was his friend Rab, but that's only because he was played by Richard Beymer of West Side Story fame.  I kept expecting him to start dancing.

Since I remembered enjoying this movie in school, I guess it is either entertaining to kids or it proves the point that anything is more entertaining than listening to your average teacher drone on for an hour. 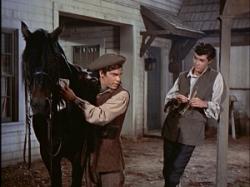 Johnny Tremain may be some what historically inaccurate, but as it names so many of the founding fathers and features several significant events of the American Revolution, it remains to this day a great introduction to early American history.   Like my brothers, I saw this in school and the memory of it has lasted longer than any other film they showed us.  My son was shown it in middle school and it bored him silly.  It should be shown earlier, such as fifth grade.

The character of Johnny Tremain represents the heart of the idealized American spirit. He has such lines as, "I think I can do anything, if I just get a chance."  and "I'd rather be my own master."  In fact, he is a metaphor for the thirteen original colonies.  He is a bastard relative of a wealthy British, who owns the shop in which Johnny is an apprentice.  Just as the colonies were the bastard property of England.  Johnny is eager, helpful and always optimistic, something The United States has always been noted for.

I agree with Scott that the historical figures depicted are fairly bland.  They are just names attached to faces who are prone to pontificating. The events of the film are likewise sanitized.

I call into question the famous Boston tea party, in which some colonists dressed as Indians and threw tea into the ocean in protest of British taxation. Depicted in this film, they cordially ask the captain of the ship to hand over the keys to the cargo hold, which he does willingly.  After tossing the tea over board, the men then clean up the ship's deck.  The entire event is shown to be orderly and polite.  Some may consider this sedition, but I have a hard time believing that a bunch of worked up protestors were so utterly pleasant in sending a message to a dictatorship.

Johnny Tremain is how we may want to think of our country's origin.  The population of Boston is a friendly group of Christians.  They work together for a common goal.  They are admirable, righteous and down right wholesome.  Common sense tells us people of any time and place are not so simple, but as this is a children's introduction to American History, it is an acceptable theme.  As an elementary teaching aid, Johnny Tremain is a four star teacher's assistant.   For everyone else, it says as much about the 1950's as it does the 1760's.