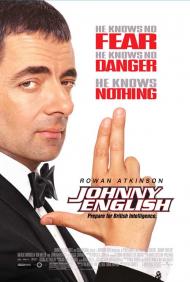 Johnny English is a delightful screwball comedy. Its humor is definitely British, but since it parodies James Bond, its appeal is universal.

Johnny is a desk jockey at British intelligence, who dreams of being a real James Bond type spy. A blunder, of his, causes the death of England's top secret agent. Then a bomb goes off at the agent's funeral, killing all of the other secret agents. This leaves Johnny and his trusty companion Bob, as England's last hope against a plot to steal the crown jewels.

John Malkovich plays the bad guy with a bad French accent. The French get skewered pretty well in this movie. At a party thrown by the Frenchie, Johnny tells another guest "The only thing the French should be allowed to host is an invasion." Ooouuuch!

The movie is fast and funny. Atkinson is the master at self-deprecating slapstick humor. In one funny scene he pretends to do karate moves in his underwear, when he thinks no one is looking. Atkinson is both skinny and, well, homely. Not to be rude, but I think he is fully aware of this fact and takes full advantage of it for the sake of a joke. His attempts to be suave when talking to an attractive woman are made all the funnier considering his looks.

Where as he is funny, he is no leading man. Atkinson would make a great sidekick or a supporting comic relief. He is not able to carry this movie. Many of the jokes work very well but Johnny is just to unbelievably stupid to actually cheer for. My sons and I laughed through this good movie. We just didn't laugh enough to consider it a great movie. 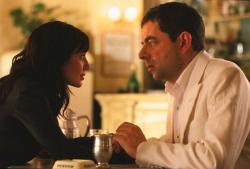 Eric called this a screwball comedy, but when I think screwball, I think It Happened One Night or What's Up Doc?, with lots of fast paced and witty dialogue alongside the slapstick. Unfortunately, Johnny English is almost entirely slapstick humor, with very little witty dialogue. This isn't surprising considering Rowan Atkinson first leapt to fame, at least in America, as Mr. Bean in the show of the same name, each episode of which was virtually a silent movie.

There are, as Eric said, some things to laugh at in this movie, but really, all of the jokes are so obvious, they never generate much more than a chuckle. When Johnny's sidekick Bob tries to give Johnny a tracking device, so that when they parachute down onto one of two buildings side-by-side, and Johnny refuses to take it, you just know that he is going to end up on the wrong building.

I disagree with Eric when he says that Atkinson couldn't carry a movie on his own. I think he could, just not this movie. Without a sharper script, I'm not sure anyone could carry Johnny English. Now, a movie version of the Ben Elton penned Blackadder series, in which Atkinson also starred, would be a movie worth seeing.