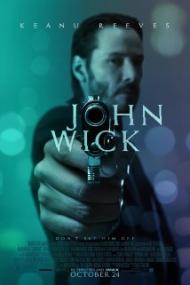 The revenge fantasy is an old story that has been done nearly to death. John Wick, which is of that genre, doesn't break any new ground. There are the usual cliches and the story doesn't shy away from them. It actually seems to revel in them. Most importantly, it's nearly non-stop action from start to finish. This is a movie that knows exactly what it wants to be and nearly succeeds at everything it tries.

Keanu Reeves is the title character. When the story opens he is leading a quiet life in New Jersey. His wife has just died and after the funeral a puppy arrives at his doorstep as a gift arranged by his dead wife. After his flashy, classic car is noticed by some Russian mobsters, they break into his house, beat the hell out of him, steal his car and even kill the puppy. It's only afterwards they realize their mistake when they find out that John Wick used to be an assassin for the mob. And not just any assassin, but the best of the best of them. A pissed off John, with nothing left to live for, soon sets off on a trail of revenge against the mobsters, blazing a trail of dead bodies across New Jersey and through most of New York City, not even stopping when he learns that the young punk who lead the attack on him is actually the son of the man John used to work for.

The film is produced and directed by David Leitch and Chad Stahelski, two former stuntmen. Stahelski doubled for Keanu Reeves in all three of the Matrix films. The two of them definitely know action. When Wick is in motion he is a one man killing machine. The number of dead is in the video game range. The over-the-top carnage is so stylishly filmed that it's easy to forgive the implausibility of it all. This isn't reality, it's a hyper-reality where in the middle of New York City gun battles can rage without the police ever showing up and one man can shoot his way through dozens of other men in the middle of a night club. So long as Wick is moving the movie succeeds perfectly. And at just 90 minutes he rarely stops moving.

On the few occasions when he does stop, the story wobbles a bit. The worst cliche in the film happens when the head of the Russian mafia captures Wick for a short time. Despite the fact that Wick has proven to be possibly the deadliest man on the planet, instead of killing him right away, the mob chieftain decides to talk to him for a while and then, in the best tradition of James Bond villains, walk away when he wants Wick killed, which for some unexplained reason is to be by suffocation instead of a quick bullet to the head. The mobster then follows this stupidity up with another stupid move at the film's climax, just when everything has been settled.

Although Reeves dominates the story, speaking few lines (which suits his acting style perfectly), there are also several colorful supporting characters. A hotel for criminals features prominently in the story, run by someone simply known as "Management". On the premises no crime may be committed. The hotel clerk is played enigmatically by Lance Reddick while Ian McShane seems vaguely connected to the hotel. Adrianne Palicki plays Ms Perkins, a deadly female assassin who is only too happy to accept the contract on Wick's life. And Willem Dafoe plays another assassin who is connected to Wick's past. John Leguizamo has a small part as the owner of chop shop where John begins his investigation.

If you're a fan of action movies, this one is almost impossible not to like. It's fast paced and stylishly violent. There's enough color in the background and history in the character that it could easily support a sequel. So long as the same directors return and it doesn't start to take itself seriously I'd definitely be up for revisiting this world. 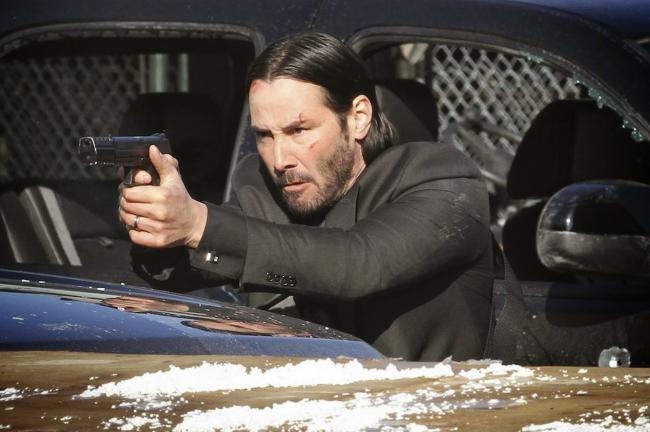 The description of the number of people John Wick kills being in the video game range is a very accurate one. In fact, that number was the one thing I was most curious about after finishing the film. I apparently was not the only one as I found a website that not only counted the dead bodies but how each person was dispatched as well. As for the body count, they state it was seventy seven.

Keanu Reeves has never been much of an actor, doing his best work when playing a dim bulb, such as in Parenthood or as Scott wrote, a man of few words, like in The Matrix. Reeves is able to play a moron or silent man of action convincingly. The less he talks and the more he moves the better his performance gets. Perhaps in a nod to Speed, his first hit action film, Wick takes a ride on a bus after having his car stolen.

Either way, Reeves’s career is running on fumes from the fuel of those past glories. We could make a long list of actors who could have played this role just as well or better. I would start mine with Tom Cruise and Jason Statham. Not only could they do the action scenes just as well but they have charisma and movie star presence, something Reeves has not had since The Day the Earth Stood Still. The long hair and beard he sports here do him no favors.

If Reeves is going to continue to make movies it is going to be in these types of films that attract viewers that are none too interested in realism or acting ability. As soon as Wick begins his payback, the movie becomes an action packed blood bath as he leaves a trail of corpses in his shooting gallery wake. At one point he has his gun an inch from a man’s head when he fires not one but two bullets through his brain, just to make sure.

The movie has a few nice lighter moments. Scott mentioned the hotel "Management" while there is also the police officer who arrives at Wick's house after Wick kills several intruders. He asks Wick how he is doing and whether he is working again. Reeves face has blood on it but the policeman seems to take it in stride as if he knows Wick and such suspicious things are commonplace with him. Later, Wick sneaks into a club, getting past the bouncer by complimenting him on his weight loss, and holding a gun to his head.

As Scott first noted, a man getting revenge through multiple killings is a tried and true formula. John Wick may not be the most famous of them but it is an entertaining watch. I was never bored as this action film stayed gloriously shallow and briskly paced. John Wick was originally intended to be a trilogy franchise, so we may not have seen the last of him.