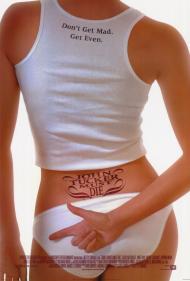 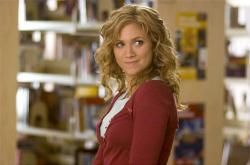 Despite falling victim to two of the biggest cliches of the Teen Movie genre, John Tucker Must Die still manages to mildly entertain, which must be some kind of credit to the actors and filmmakers behind it. It doesn't wow you and it misses some opportunities at laughs, but overall it won't bore you and doesn't embarrass anyone involved with it.

The biggest cliché in the movie is the "ugly-pretty girl syndrome". Brittany Snow stars as Kate, a high school girl whose single mom (Jenny McCarthy) constantly moves them from town to town following failed relationships. Kate, who is obviously attractive, is some how seen as unpopular and has no friends and has never been on a date in her life. However, once Heather; the head cheerleader, Carrie; the head of everything else, and Beth; a vegan activist, give her a makeover, Kate is the hottest girl in school. Since she was already cute and, as she shows in one scene, has ripped ab muscles (which she apparently achieves without ever exercising), the makeover lacks any real conviction.

Kate is given this attention by the other three girls for the purpose of extracting revenge from John Tucker. Tucker was dating all three of the girls at the same time and subsequently dumped all three of them at the same time and now the three want to make him feel the same thing they did by getting him to fall in love with Kate so that she can then turn around and dump him. Complicating matters are the fact that Kate, who has never been popular before, finds herself genuinely falling for John, and also falling for John's brother Scott, the ugly-hot guy.

If this plot sounds vaguely familiar it's because it bears more than a passing resemblance to 2004's Mean Girls, only without the razor sharp wit and social insight. In that movie you had an unpopular ugly-pretty girl (Lindsay Lohan) getting a makeover from three popular girls, not to fool a boy, but to fool the three girls. In every way, it was a superior movie to this one.

The second cliché that the movie falls prey to is having actors in their mid to late twenties playing high school students. I know that it's easier to have actors over 18, so you don't have to worry about child labor laws and all that, but surely they could have found people who at least looked like high school students. Here's a rundown of the main cast's age: Jesse Metcalfe (27), Ashanti (25), Sophia Bush (24), Arielle Kebbel (21), Brittany Snow (20). Metcalfe, especially, looks his age, to the point that you almost expect him to be arrested for hanging around a high-school!

If only this movie had been made in the 1980s it might have had some edge or at least some nudity, something that would have definitely spiced it up. In this politically correct time however, it seems that teen nudity (even with actors as old as these), just isn't done anymore. The only thing sexy in this movie is a very brief girl-girl kiss. There are a few PG-13 references to Beth being a slut, but they are very mild.

I suppose I wasn't this movie's target audience, despite being closer in age to the actor playing the title character than some high school students, but I also probably wasn't Mean Girls target audience either. Which just goes to show that a great movie will transcend its audience and become a classic, while a mediocre one can only hope to mildly amuse. 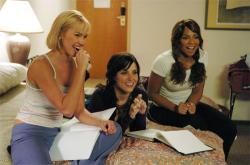 John Tucker Must Die is mildly amusing, but it gets lost in it's lack of emotional commitment. The moment of truth, when Kate realizes she actually loves John, is misplayed. She acts as if she really has feelings for him and he for her. Yet, when they break up it is as if they really didn't give a shit. Lesson number 2 in screen writing. If the characters really don't care about what they are doing, then the audience won't either. If the people on screen have no emotional involvement, how can you expect the audience too?

The one and only emotion that gets explored well is jealous bitchy girl syndrome. Even that wears thin after awhile. What's left is some highschool students milling around each other, but not really accomplishing anything. Kate likes John's brother Scott, and he her, but that relationship is never explored beyond being lab partners.

Other than the vegan chick referring vaguely to being "intimate" with John, and John getting into a bed, alone, wearing only a thong, thinking he is about to get laid, sex is never mentioned. I agree with Scott, if a movie is going to be this thin in plot, it might as well have spiced the sex up. If not, then it needed to go in the other direction and follow Disney's vastly popular Highschool Musical's lead in which sex is never even an issue. But like the character's motives, this movie stays completely in the middle of the road when it should have decided to take a different route and either become a sex farce or a moral piece on playing with someone's emotions. It touchs vaguely on both issues but not enough to be entertaining.