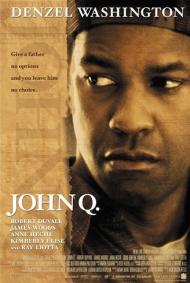 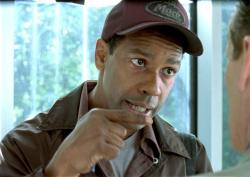 There is probably no stronger love than that felt between a parent and a small child. In John Q, this is explored through a father's desperate attempt to get a heart transplant for his dying son. When he and his wife discover that their insurance will not cover such a costly procedure he grows more and more frustrated until finally he does the only thing he has left to do. He takes over the emergency room, holding several patients, interns and a doctor hostage, demanding that his son is placed on the heart donor list.

Denzel Washington seems to be at a place in his career where he can do no wrong. And in John Q he pulls off what could have been a melodramatic mess in less capable hands. He is really playing every father who has ever loved a son and it is at times heart wrenching to watch. Especially intense is the scene where he 'says goodbye' to the boy with tears streaming down his face.

The supporting cast includes James Woods, at his arrogant best, as a heart surgeon held hostage. Robert Duvall is underused as the detective on the case. He really has nothing to do but look serious and give orders. Kimberly Elise as the mother matches Denzel in emotional intensity and the two of them really capture the horror of losing a child. Anne Heche, Eddie Griffin and Ray Liotta round out the cast.

The script is adequate to the task but is certainly not groundbreaking or brilliant by any means. Nick Cassavetes direction is smooth and competent only occasionally slipping into cloying sweetness. All in all an entertaining movie that is easy enough to get caught up in, in fact you may find yourself cheering along before it's over.

John is married with a son.  The son has a heart condition and needs a transplant. The operation will cost $250,00.  He has recently been put down to part time at his work and as a result his insurance coverage has been changed.  It will no longer cover such an expensive procedure.  His attempt to get assistance is shot down by bureaucracy and red tape.  One humorous moment had a social worker telling them that if they were on welfare they could get help.

Now, I am real close to the same financial bracket as these people in the movie. I and my wife have had to deal with insurance companies. Getting approval and referrals every time something above a regular Doctors visit is required can be a headache and sometimes annoying.  So through some of this film I was able to relate to these people and their frustration.

Then the makers of this film decided to take this film to an exaggerated political level.  You know how Democrats have long preached class envy and how they are for the working class. Well this movie is all of that propaganda.  Just before John's wife's car is repossessed he is watching President Bush on TV. Obviously foreshadowing bad things to come for a lower middle class family.  And whose face did I have to endure at the end of the movie?  Hillary Clinton in a snippet from a speech where she is talking about how many Americans currently do not have health coverage.

Okay, so I relate to this couple's dilemma and would have enjoyed this film if it wasn't so damn biased.  I mean this thing was less partisan than Senate Majority Leader Tom Daschle voting on tax relief.  Whenever the couple must talk to the head of the hospital, Anne Heche, it is always in some huge, expensive office.  Demonstrating just how rich the hospital is. Even worse is one scene where John approaches a Cardiologist who is talking to an obviously rich patient who just had heart surgery.  The rich couple and the Doctor are talking like they are old friends and how they will be getting together soon to play tennis.  Oh but wait, there is more. After John takes over the emergency room, in a desperate attempt to force the hospital to put his son's name on a donors list he talks to the hospital employees about more unfair practices.  One nurse gives a speech accusing Doctors in general of taking kickbacks from HMO's to not do certain procedures that cost the insurance companies too much money. The whole mood of this movie is so damn holier than thou it made me sick.

Yes, insurance companies can be a pain but lets look at reality.  They are a business.  They are not charitable institutions.  The same can be said of hospitals.  John Q and his family are cuter and sweeter than a Norman Rockwell painting.  Putting them up against the mean, selfish,
rich hospital is such a ignorant setup.  Their are literally tons of organizations that are set up to help these types of people out.  I know people who have gotten their bills paid, or gotten free glasses from institutions that have been setup just in cases like these.

This movie shows only one side of the issue. Why didn't John keep better track of his insurance coverage?  It is the law that his company has to keep him notified when his coverage changes. This movie has a political agenda and it pushes ahead with it blaming the haves for the woes of the have nots.

The one thing I really liked about this movie was Denzel Washington's performance.  Crying over his dying son. Making the ultimate sacrifice to attempt to save him.  Hey, I am a dad.  I felt for these people.  It's just to bad the makers of this movie belittled it into Liberal Democratic rubbish. 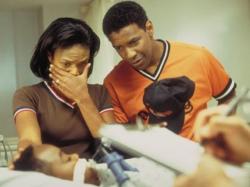 You might think that in the intervening years since this movie has been released that it would have become even more relevant. With Health Care taking such a prominent and controversial place in Obama's term as President, it's clear that the issues raised in this movie have yet to be resolved. However, this movie is so heavy-handed and ham-fisted in its approach to the subject, not to mention the over-the-top melodramatic moments its afflicted with, that instead of remaining a touchstone in the Healthcare debate, it's best if it's simply brushed under the carpet.

Whichever side of the healthcare debate you're on, when you make a movie about the subject, either condemning or praising the system, it's best if you get the details correct if you want to get your point across. I'm no expert on the subject, but a search of the internet reveals several articles that explore the inaccuracies of this movie. Time Magazine wrote a piece entitled, John Q.: How Real is This Horror Story that pretty neatly sums up the things they got wrong as well as the things they got right.

One of their points is something that also struck me about the way this story is told. "While it's true that hospitals expect to be reimbursed for services provided to even the neediest and most grievously ill patients, it's not true that they handle things in so mercenary a manner." Not only are there services set up to handle just this type of situation, the script shows both James Woods and Anne Heche behaving in an unbelievably cold and calculating manner. Are there hospital administrators who would behave in a similar manner? Probably, but I doubt there are any who would behave in such a cold hearted way when telling a set of parents that their only son is going to die. The script is so keen on labeling her character as "the villain" that it goes overboard. They may as well have simply given her a t-shirt to wear that said, "I'm a bitch." since that's about how subtly she's depicted.

As my brothers pointed out, the best thing this movie has going for it is Denzel Washington. He once again shows off his dramatic talents. He manages to raise some scenes above the preachy melodrama of the script. Even though evoking sympathy from an audience with a dying child is like shooting fish in a barrel, when Denzel is preparing to say good-bye to his son or declares himself willing to kill himself to save his son's life, the movie demonstrates some genuine emotion that is absent from most of the rest of it.

It almost seems unfair to single out the ending as worse than any other point of the story, since it's mostly all bad, but that's what I'm going to do. So spoiler alert, it should have ended tragically. Either John Q. or his son needed to die to really drive the point home. By giving the movie a happy, Hollywood ending (even though John is given a slap on the wrist of jail time), the story loses whatever meager impact it has built up until then. And the less said about the final moment between John and his son, the better. It's meant to be touching, but I groaned and possibly even threw up in my mouth a little when I watched it.

Sure, Denzel gives a good performance, but he's done that in many other movies besides this one. Go watch one of those instead.