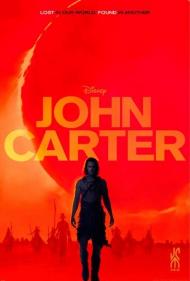 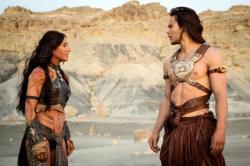 Lynn Collins and Taylor Kitsch in John Carter, or are they on their way to a leather convention?

Some movies sit in development hell for a long time, but probably none longer than John Carter. The original Edgar Rice Burroughs' novel was published 100 years ago and a film version has been in the works since 1931. That means Hollywood has had 81 years to get a decent script together and yet, this is the best they could come up with? An overly long, overly complicated mish-mash of alien mythology that feels derivative of all the science fiction that stole ideas from it, instead of the other way around.

While the original Burroughs' novel is a simple adventure story with Carter a straightforward young man's fantasy projection, that wasn't enough for the filmmakers. Apparently they wanted an epic. They give Carter a darker past and make him a reluctant hero who is drawn against his will into the fight for control of Mars. In the process they also suck most of the fun out of the story.

Even the prologue on Earth is overly complicated and serves as a good example for the rest of the story as to how the script has been needlessly lengthened. Carter is an ex-confederate cavalryman. After the war he went West to prospect for gold. In the novel, his partner is attacked by Apache, Carter rides to his aid and ends up in the cave where he is transported to Mars. In the movie, Carter is a brooding fellow still haunted by the death of his wife and child. He's still an ex-confederate cavalryman and he still goes west for gold. Instead of just being attacked by Apache however, he is first captured by the US cavalry and told that he will be forcibly conscripted into the army. When he escapes, he is chased by the cavalry into the arms of the Apache where one of the cavalrymen kills one of the Apache while they are negotiating. Only then does Carter ride off and stumble upon the cave. The only reason I can think of for this plot change is political correctness. In Hollywood it's not okay to portray Indians--sorry, I mean Native Americans--as the aggressor, but it's always okay to portray the military as corrupt and in the wrong.

Once on Mars, Carter discovers that the lower gravity has given him superpowers, much in the same way that Superman originally derived his powers on Earth. He can jump to incredible heights and kill enemies with one punch. This creates some of the best visuals and is the most disctinctive thing about the story.

To make a too long story short, Carter becomes involved in a war for control of Mars, or Barsoom as its inhabitants call it. There are two races on Mars, the Green Martians known as Tharks and the Red Martians known as the Red Martians. The Red Martians are humanoids while the Green Martians are more alien, with green skin, four arms and stand 12 to 15 feet tall. The Red Martians are divided into kingdoms and the two greatest are at war with each other. Carter ends up fighting on the side of the Kingdom of Helium against the evil Sab Than (Dominic West), partly because he's so evil, but more because the Princess of Helium has really big Barsooms and a really tiny wardrobe.

Just to make things more confusing there are a group of people called Therns who are really manipulating the events on Mars. These mystical priests, lead by Matai Shang (Mark Strong), can change shape and travel between Mars and the Earth. They have vaguely explained reasons for their actions, but none that you will care to understand.

The cast is filled with recognizable faces and voices in the case of the Tharks, who try to play it with  straight faces. Taylor Kitsch portrays Carter very earnestly and with as much charm as a plank of wood. I mean, here's a guy from 1881 who just found out that he's on another planet where he's a fucking superhero and all he wants to do is get back home? Where's the fun in that? Why not loosen up a little, kick some alien ass, sleep with the hot princess and just generally try and have a good time? It's not like he's got a lot waiting for him back on earth except for some gold and a dead wife and child, as we're repeatedly shown.

It's this overly serious tone and lack of fun, as exemplified by the scene where Carter is killing a massive amount of aliens while flashing back to the death of his family, that kills the movie. It drags the story out and makes it feel even longer than its nearly 2 and a half hour running time. I was expecting something along the lines of Brendan Fraser's Mummy films, but the filmmakers were going for something more like Avatar.

Burroughs wrote eleven John Carter novels and the movie leaves itself open for a sequel. If this is the best they can do in 81 years, maybe they should take a little longer for the next one.

Yeah, John Carter is way too long. It takes forever to hit its stride. On top of the altered back-story for Carter involving the cavalry that Scott mentioned, there are also several scenes set in 1881 where we meet a young version of the author, Edgar Rice Burroughs, just to further convolute the plot. As Burroughs reads his uncle's story we then jump back in time 13 years. The end of the movie returns to Burroughs as he finishes reading John Carter's fantastic tale.

The movie improves once John Carter finally arrives on Mars. His adapting to the new gravity and learning that he can leap great distances is done well and his subsequent discovery of the hatching Thark babies is intriguing. The movie eventually hits its stride after John Carter meets the princess. The middle section of the movie with them on a quest across the barren landscape, accompanied by one of the Tharks and a very ugly Martian dog, is as entertaining as the movie gets.

There are only flashes of humor to lighten the heavy handed tone. The friendly and loyal, but frighteningly huge and lightning fast, Martian pet provides a few chuckles, as does the Tharks' misunderstanding of John Carter that leads to them calling him Virginia. There is just too much unnecessary politics going on and the characters have a bland sameness to them.

I haven't read the original Burrough's story but I am a fan of one of the writers of this horrible screenplay. Michael Chabon is the author of one of the best novels of the past 20 years, "The Amazing Adventures of Kavalier and Clay". I'm deeply disappointed that he could do no better than this drivel. But then other great novelists of the past have tried their hand and failed in Hollywood.

Visually John Carter justifies the reported 240 million dollar price tag Disney spent on it, but the 3D added very little. The CGI Tharks look amazing however (see photo). Picture them as a sort of cross between the Gungan of Naboo from Star Wars and the Na'vi of Pandora from Avatar, only with an extra pair of arms. They are the most interesting characters in the movie. I wanted to know more about their culture. Oh and speaking of Star Wars, at one point John Carter mimics the pod race scene from Phantom Menace and then later copies the arena scene from Attack of the Clones.

Most of the acting is quite bad. Scott mentioned the wooden performance by Kitsch in the title role. I agree, but think that Lynn Collins is equally bad, except instead of being lifeless she is an overcooked ham. Her performance would not have been out of place in a Cecil B. DeMille Biblical epic. But unlike Anne Baxter in The Ten Commandments, Collins doesn't seem to be in on the joke. She's as earnest as everyone else involved in this overproduced mess. John Carter is ultimately as dull as the Martian desert depicted therein. 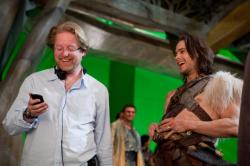 Holy crap Scott, When did you become me? “In Hollywood it's not okay to portray Indians--sorry, I mean Native Americans--as the aggressor, but it's always okay to portray the military as corrupt and in the wrong.”  Of course I agree completely.  Add the previous scene in which Bryan Cranston remarks on how badly the Indians have been treated and you clearly have a social/political point being made.  The three Caucasian male writers express their white guilt by trying to create a comparison to how Europeans treated Indians to how the humanoid Martians treat the Tharks.

I agree with both my brothers about the length of the film.  They mentioned the confusing scenes at the beginning, that do not get explained until the very end of the film.  I would add that, because the entire story is told via the reading of Carter’s journal, every scene that does not feature Carter should not exist.   Besides, the Princess explains it all when they meet anyway.

Taylor Kitsch does not do a completely bad job of acting.  This is an action film after all.  There is very little emoting required of him.  What Kitsch lacks is leading man charm.  He is utterly forgettable in the role.  It needed a lead who could bring at least something memorable to the table.  Vin Diesel's deep voice or even a young Jean Claude Van Damme and his Belgian accent would have brought more charisma to the part than Kitsch.

Lynn Collins is likewise forgettable.  Scott mentioned her physical attributes and wardrobe.  Since her contribution to the film is merely to provide some T & A, I would have liked less clothing.  John Carter is a male fantasy film, just as Twilight and The Hunger Games are female fantasy films.  In those movies, women enjoy seeing the handsome men moon over the leading lady.  In male fantasy films, men want to see hot chicks in scantily dressed attire.   I never cared if she picked up a sword or not.  She just had to look good in her Martian bikini.  We see Kitsch’s nipples, why not Collins's?

With a little editing, John Carter could have easily been a much better film.  As Patrick wrote, the action and special effects on Mars are very entertaining.  Carter going to another planet, leaping great distances and having super strength makes his story Superman's, only in reverse.   Too bad the three writers could not have understood that less would have been more.